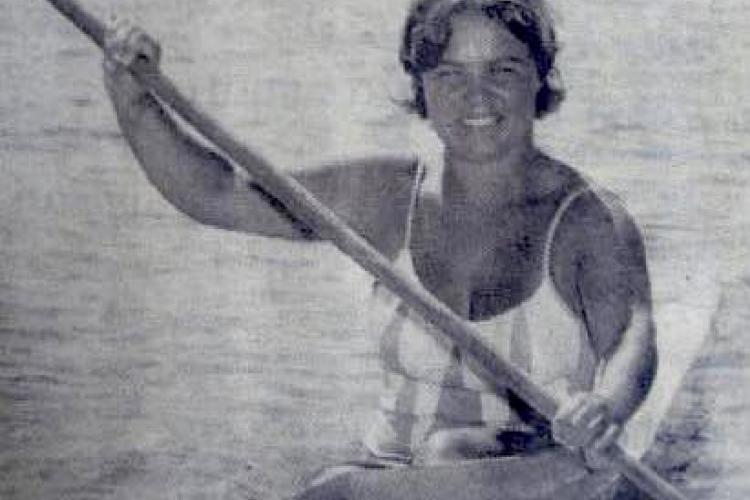 Christmas will behind us all too soon……what then? No longer do we have the Murray Marathon to occupy our members in the Christmas –New Year week. How did our club members entertain themselves before 1969?

As reported in the Stawell Times:

Ingrid expects to go overseas in April and is in training while here for competition work. She has been in Australia nine years. While in Europe she hopes to visit relatives in Germany and there join a Kyak club which will give her the “open sesame” to clubs throughout the country.

After she had made the frail craft fly round Lake Fyan’s Ingrid apologised in the warmth of Tuesday’s weather saying it was “too hot” to try very hard.

With the Fairfield party are Mr and Mrs. Howard. They are at Lake Fyan’s for the fifth year. “Somehow we are always going somewhere else for the holidays but end-up coming to Lake Fyan’s – it is a magnificent spot for both our canoeing and for our interest in photography and the naturalists side” Mrs Howard said. Ingrid chimed in and the water here with the constant cross-wind is ideal training ground for Kyaks. Twelve members of the FCC attended the camp.”

In her printed reflective piece “Canoeing and other Stories”, Jess Howard write’s about the 1960’s camping during the Christmas break, at Lake Fyans near the Grampians. This was a man-made lake with a lot of standing dead trees in the water. A haven for birds and other wildlife.

“It was after the 1956 Olympic Games when we met some German friends. The girls were canoeists; Heidi (Sager) went to the Rome Games in 1960. One Christmas we were the only Aussies amongst about fourteen Germans (Ingrid Pich/Belden being one of them), they threatened to naturalize us. We had such fun with them, learned some of their culture and their songs and food.

It was here that Arthur Howard became really interested in wildlife and indigenous culture. The best part of looking for wildlife in a canoe, you can glide along so silently without disturbing anything.

We had the best years of Lake Fyans”.

How did Ingrid find her way to FCC and their summer camps?

“I was about fourteen, a teenager, with lots of energy, and two friends of my parents - Elke and Heidi – their name was Sager at that stage – were paddling seriously. So I decided I wanted to come down and have a go. So they suggested “come on down to Fairfield”.

My parents were quite friendly with Arthur and Jess Howard who used to go to Lake Fyans camping. Arthur, he was a bird watcher, he actually discovered it and that become like a second home (camping at Lake Fyans). My parents were very much into nature, and because Lake Fyans was so natural, Lake Fyans was ideal for them too. We just used to camp ‘wild’ in the scrub & with a fire at night. Everything was really simple and primitive. Nobody really had a lot of money, but we liked it that way you know. We had the kayaks there, did some paddling, and there was a yacht club there. They were really good old days, fun days.

Others would come, some other German friends of my parents. Heide didn't come so much, Elke occasionally. The Sagers, their parents, weren't so much into camping. My parents were more into camping and my younger brother had more friends in Lake Fyans than he had in Melbourne”.

Ingrid goes on to relate some of the exploits around these holidays. “We had old cars and the roof rack blew off once when it was a really windy day (with the canoes attached). There were some really funny stories. You'd switch off the motor going downhill to save some petrol!

When we were paddling, we didn't muck around much with the boats. It was ‘the getting-there’ that sometimes things happened. “We had old cars and the roof rack blew off once when it was a really windy day (with the canoes attached). There were some really funny stories. You'd switch off the motor going downhill to save some petrol!

When we we're camping, Fritzi (FCC Olympian Fred Wasmer), he was a real comedian, he would have a hammock and he would sleep in the hammock and when we would have had fruit and veggies, the possums would come and stuff would fly everywhere as he would try and get out of the hammock. It was hilarious.

It was all very primitive, if you had a floor in the tent you were really flying high, you know. Everything was just costly and nobody had the cash flow we're used to these days. Well I don't know about now, but everybody now has got cars and so very convenient to get around.”

Heidi Sager’s obituary notes that “Camping at Lake Fyans was a regular pastime for many years, even going in the back of Jim’s truck (her husband to be)”

Marg Buck first attended: “About ‘62, I think.. I joined in ‘62 & and my recollection is rather vague. It was organized as a club outing, our club camp. It was to sort of a ‘get away’ from being on a river, just sort of somewhere nice and it wasn't overly busy. It was a reasonable price, low cost. Very basic camping, as I recollect”. 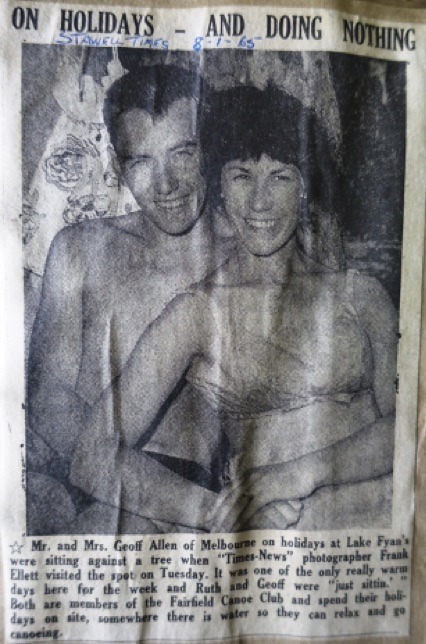 Geoff Allen was also a FCC Lake Fyans camper, so much so that he returned with his new wife, Ruth, for their honeymoon in 1967, “Just sittin”. Geoff visited Lake Fyans in recent years and lamented how very different it all is now: organised camp sites (no drop toilets), water-skiing etc! Not the lovely unsophisticated and quiet spot of the ‘60’s where a gentle, quiet paddle was all the go.

We would love to hear from any others who attended these Lake Fyans camps .Please send in your memories or photos.

Question: So, where are you camping this Summer? Is your boat going away on holiday too?