History Snippet – “Do you remember this Club boating holiday?” 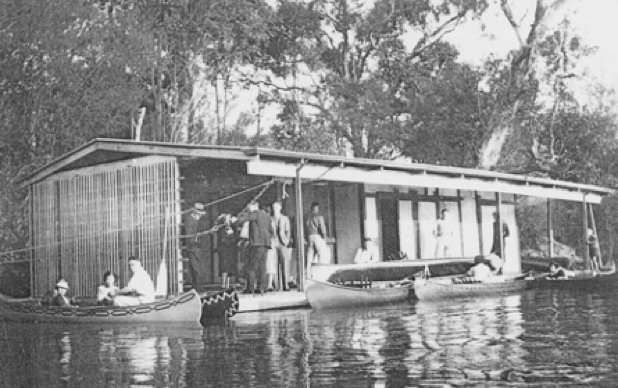 If you do remember this event, your memory is clearly failing you! This photo is of the Chipperfield’s Floating Kiosk on the River Yarra upstream of the Chandler Highway Bridge at the confluence of the Yarra & Connor’s Creek.

“Read-on and enjoy a bit of Yarra history as recorded by some of our club Legends.”

Chipperfield’s Boat House (c.1919-1972) was one of several boathouses built in Kew and Fairfield in the late 19th and early 20th centuries. Chipperfield’s ‘Moorings’ and floating pontoon was a substantial two-storey house that incorporated an upper storey residence with a boatshed underneath & became a popular destination in its day. The well-known architect of the day, Harold Desbrowe-Annear (designed the Chapel St bridge built by John Monash) grew up near the Yarra and designed several treasured riverside projects including ‘Ballangeich’, the Macgeorge house at the junction of Darebin Creek, as well as part of Chipperfield’s boathouse. 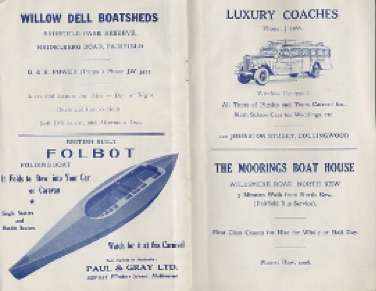 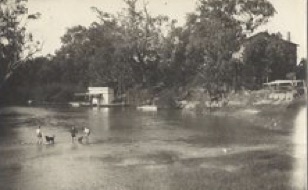 Note the double-storeyed “Moorings” in the background.

The house was built on the river flats on the bend of Willsmere & Kilby Roads, Kew and was very flood-prone. ’The Moorings’ was almost washed away in the 1916 floods, and in 1934 almost totally submerged when the Yarra River rose 26 feet in 14 hours.

“Mr. J. Chipperfield, proprietor of a boathouse and refreshment-rooms on a bend of the river at the north side of Studley Park, has had a struggle to save his home. Mr. Chipperfield's premises are situated on the neck of a narrow peninsula in ordinary times, but when the flood waters poured down they forced a more direct route, and the boathouse and home are now in the midst of a raging torrent. Yesterday the brick chimney collapsed, and the whole structure appeared to be in imminent danger of being swept away. It had a cant of at least 2ft. Mr. Chipperfield managed to row to the boathouse of a friend, and return with a wire cable 160ft. long. With the assistance of friends he was enabled to stay the building by means of the wire, affixing it to the stout trunks of gum trees in the vicinity. Mrs. Chipperfield and three children are meanwhile housed at the residence of a relative.” 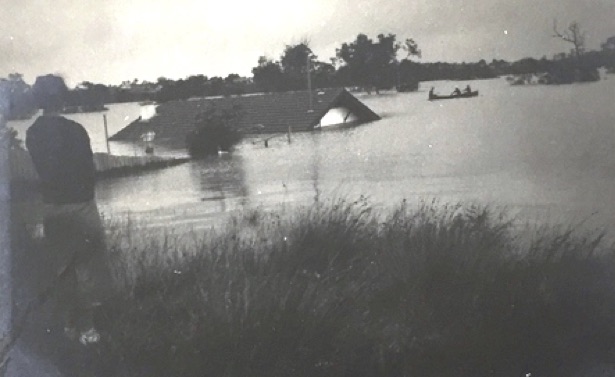 Following the 1934 flood, the house was restored. The floating pontoon, sometimes referred to as a ‘kiosk’ or ‘canteen’, was used to store canoes. Both were removed in 1972 for the construction of the Eastern Freeway.

What can we make of our FCC Legends collected memories?

Geoff Allen, FCC member in 1950-60’s, recalls that as a child, he used to collect water-lilies from the billabong adjacent to the ‘Moorings’. His father, Fred  Allen, was a member of the FCC in the ‘30’s and used to brag to young Geoff that: “he was very proud of the fact that he held the club record for C1 race to the ‘floating boathouse and back to the club’ for many years”. What Geoff never told his father later was:” I sort of took that as a benchmark for my training sessions. I never told him that I used to beat it regularly. I used to take the old Struer up to there-and-back and try and do it under his time”. Of particular interest is Geoff’s observation that:” I never saw the place actually in operation as a boatshed, it was abandoned by then (by the late Fifties) & somewhat derelict.”

This observation probably goes a long way to explaining why Marg Buck, Ingrid Pich and Jonathan Mayne do not hold any particular memories of “Chipperfields”. Kevin Hannington on the other hand, has good recollections of this floating boatshed as it was at ‘Chippers’ that he and Bryan Harper (Kew Canoe Club)  would regularly launch their C2 to go training, from 1954 right up until 1960. Kevin says that the river was very windy in those days but it was dredged and cleared of fallen trees. In fact, fallen trees were not the feature of today as the banks were held firmly together by the weeping-willow tree roots. He recalls that the river was “deep enough for a ferry to travel up to Bourke Road”, even across the shallower section we encounter today at Darebin Creek junction. Kevin used to paddle to Banksia Street and enjoyed a lovely beach that was on the right-hand bank just upstream of the Bourke Road Bridge.

There are two more important appendices to our “Chipperfield snippet. The first relates to the famous Australian photographer, Frank Hurley. Evidently Hurley asked FCC to help take some photographs of paddlers on the Yarra. The resultant photo-shoot was organised by Jonathan & Roy Mayne (his father) to have a ‘flotilla”of members on the water.  As Geoff describes: “They wanted everybody up there and look like an 'en masse' group of canoeists enjoying a Sunday afternoon paddle. The photo was taken in that corner of the bend that was very close to Chipperfield’s. It doesn't show the boatshed of course, but it was very close”. 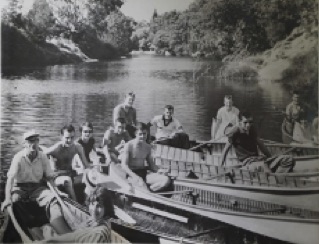 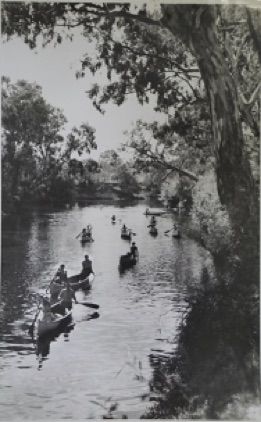 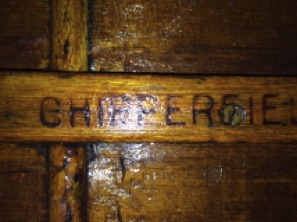 The final, and wonderful, jig-saw piece (appropriate in these COVID lockdown times) also revolves around the Mayne father-&-son combination. Roy Mayne had an old second-hand Peterborough, “Lazy Days”, which would have been built around 1900. Dated by the fact that they encountered a problem with splitting planks, and switched to the close ribbed, narrow plank design sometime about 1914. Roy sold “Lazy Days” but Jonathan recently re-purchased it and, to his great delight whilst restoring it, found that it has “Chipperfields” burnt into the keel. Clearly ‘Lazy Days’ had been a Chipperfield hire boat in a former life! 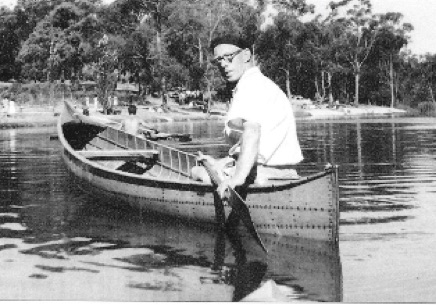