Courtship on the Yarra - Snippet 18 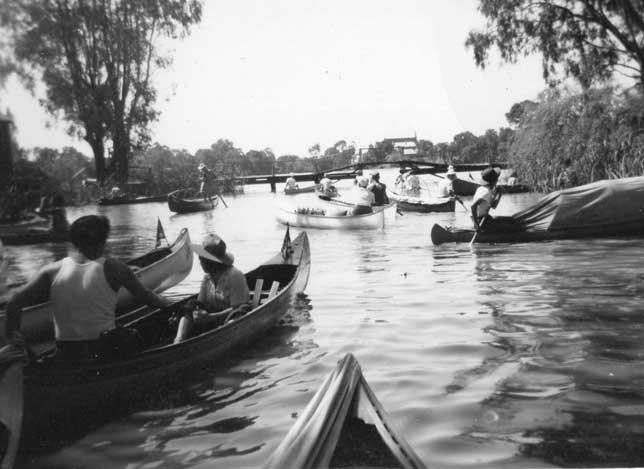 We recently were made aware of a personal reflection by Jessie Howard that paints a very different era of courtship on our stretch of the Yarra and beyond, in the early years of the Club. Jessie and her husband Arthur were members of Rudder Grange, a Boat House that used to sit at the river end of Alphington Street at this time, but later joined FCC when Rudder Grange ceased operation.

Read on, as it’s clear that their group’s activities were commonplace on the weekends in the days before television and discos. As Jessie described:

What a surprise to know Arthur was interested in canoeing. That was back in the late 30’s early 40’s, before we were married. We rode our bikes to the Studley Park Boathouse, where the newly acquired canoe was stored. It was an 18ft Canadian type, ribbed and canvasses craft.

We set off from Studley Park, with me sitting on some cushions that the proprietor Carl Sierak had loaned us. On that first day I sat there feeling a bit apprehensive, this was a new experience for me. Arthur did well; we got as far upstream as Rudder Grange boat house, about six and a half kilometres. Somehow, we then got tangled up in the willows and inexperience landed Arthur in the water. Christened our canoeing!

We found the Rudder Grange boys more working class types that we were used to. They were all blokes; I was the only female for a long time. Some of the boys slept in their canoes on the river every Saturday night. They had a mattress that fitted in the bottom of the craft and over the top a canvas cover held up with bent canes that fitted into the gunwales, a bit like a covered wagon. They would tie up to a tree and float on the river for the night. 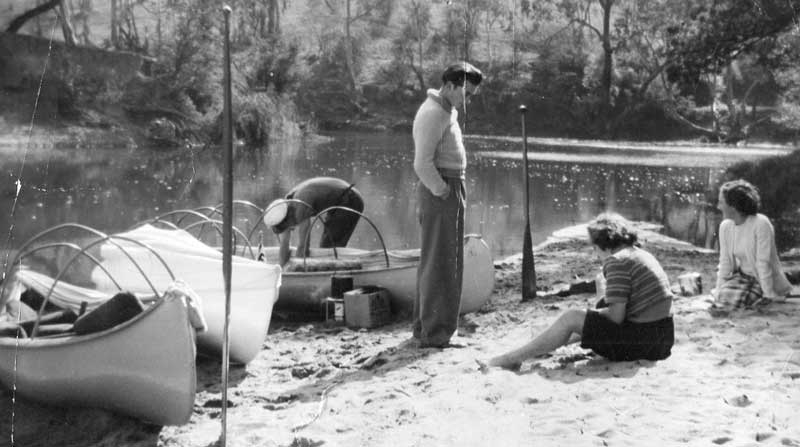 It wasn’t long before we all joined them. We would all ‘go down’ at various times on Saturday afternoon and bring food for the weekend…even if we went to the pictures or a party we all came back to the river to sleep. The saying was: “Are you sleeping down tonight?” Eventually there were about fourteen of us sleeping on the water every Saturday night.

Arthur and I both slept in our canoe, which was brazen for that day and age…the canoe was broad enough for us to fit cosily into it. We weren’t the only ones to lie down side by side in a canoe – the difference was we stayed all night. Some of the boys took girls out then in their canoes like a bloke would have in a panel van or car in a different time. (Excerpts from: Canoeing and Other Stories by Jessie Howard. View these on FCC History site.)

As many of you will be aware, a Canadian has three thwarts, fore, middle and aft. Jon Mayne, as a young man, was impressed that adjacent to the FCC Clubhouse boat storage door there was, for some inexplicable reason, quite a pile of unwanted middle thwarts! 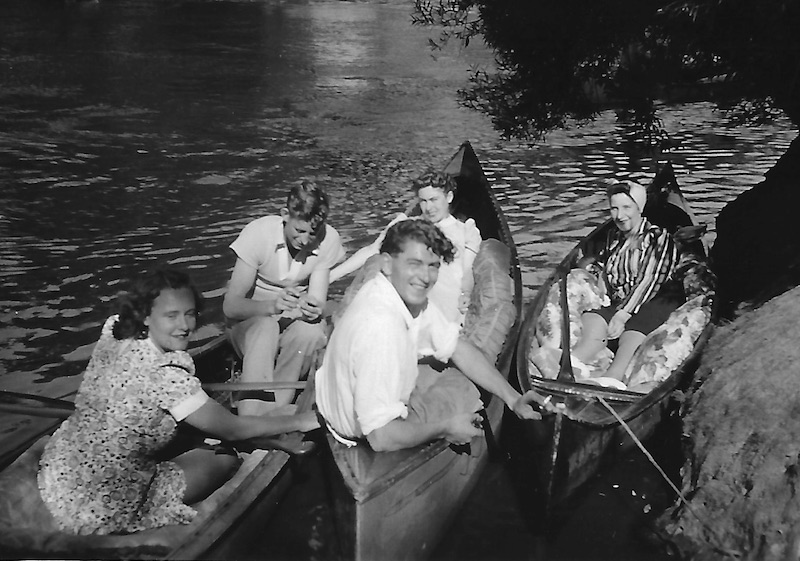 These days, our river is being returned to its natural native beauty with removal of exotic trees, such as the weeping willows, however, these trees were once much loved. We have come across a report made in November 1925 (Water Sports magazine, Australian News by C.H. DeLaRue) where it was complained that: ”There was much debate over the operations of the Melbourne and Metropolitan Board of Works, (the controlling body of the river) in their snagging operations. It appears to be their intention to remove all our splendid gums (? source of camp firewood), wattle and willow trees         (? cosy nooks) from the banks of the river and to have approximately ten feet clear on each bank of the river. If carried out, all shelter and shade for the river craft will be removed and, also, the wonderful natural beauty will be vanquished. Fortunately our leading papers are taking the matter up and protesting, as also are artists, canoeists, etc.

We have it on good personal authority that the courting ritual of “trial by canoe” continues to this day…..does it not?

More on "Snags on the Yarra" and the removal of exotic trees.

See the link "Snagging on the Yarra" below, and the Herald Sun article which provides the Board of Works response to the snag removal controversy.

Beauty of Yarra Not Endangered

Mr Gibbs added that steps were being taken also to prevent the pollution of the river by noxious trades. Much had been done in this direction.