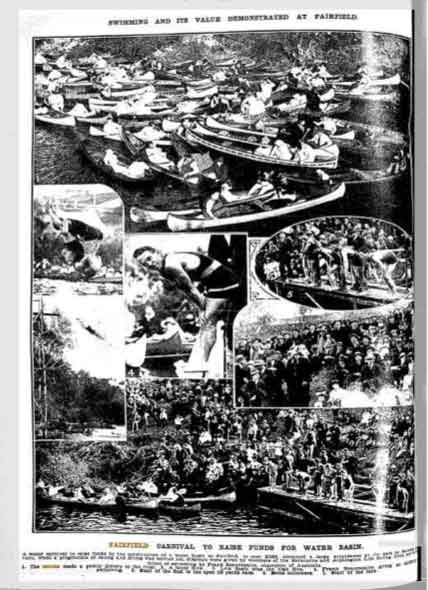 You will all be well familiar with the remains of this Swimming Basin as you cruise upstream to Zoli’s Straight, but do you realise its importance to the community in years after the Great War?

I attach some information taken from the Darebin Library Collection and also a photo collage of a fundraising effort in 1923. Look at the many canoes present. This reflects a very different scene from today.

Situated at the south end of Alphington Park by the Yarra River - was a popular community recreation spot from the 1920’s to the 1960’s.

Prior to the 1900’s, swimming in the Yarra River was considered indecent and declared illegal due to the high levels of pollution; penalties were administered to members of the community who chose to defy the prohibition. By the 1920’s people began to use the river for recreational purposes – mainly rowing and swimming -  and many swimming clubs and  river side ‘basins’ were established

Around 1920 the Alphington swimming club was formed and it was agreed that a pool should be built. A local contractor, named Mr J Bennet, was hired to scoop out the side of the river bank in the shape of a semi circular basin. Large rocks were transported to the site – with much difficulty by local volunteers - to terrace the floor of the pool, which was then reinforced with concrete and bricks.

By 1924, after two and a half years, the Alphington Swimming Pool was completed. One of the residents at the time remembered that on “the last day there was a cheer. Those men said they would leave Alphington a little better than they found it”

Later, a second smaller basin was built with two diving boards - one ten foot and the other three – and a timber platform erected on the other side of the river. A 23 meter long open ended barrier was built around the basin – initially iron pipe and later timber – which children were required to swim along to gain their swimming certificates. An ex-swim student recalled that “our greatest thrill…was swimming across the river – you thought you were great if you did that”.

Boys used a rope on the far side of the river and a large dead gum tree to dive and swing into the water.

Eventually lights where installed to allow night swimming and many local families took advantage of this by having picnic dinners on summer nights.

After the Second World War, with the increased mobility that motor cars brought, less people used the pool. Due to rising river pollution caused by urban development and populataion growth in inner Melbourne, swimming in the Yarra River was banned and all of the riverside public pools closed. Abandoned, the basin filled with silt and the dressing sheds fell into disrepair and finally had to be demolished.

In 2002 a local residents group – the South Alphington and Fairfield Civic Associations (SAFCA) - received a grant to partly excavate the remains of the Alphington pool.

This was sited below Fairfield Park,  so a lot of boating and other water sports on our stretch of the river. (see photo below)

What has this to do with the FCC, you ask? Well it seems our forebears were quite a prudish lot who took some exception to the attire of the Alphington bathers!

“Arrangements are being made by the Heidelberg Council to assume control of the Fairfield swimming basin. The Fairfield Canoe Club directed the council’s attention to the scanty costumes worn by bathers in the basin. The council has decided  to post bathing regulations, and the police and  council  employees be asked to take action against offenders.”