What do you know about these uncomfortable old benches? - History Snippet 14 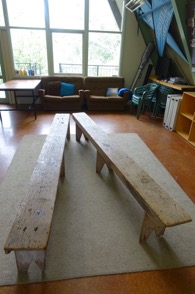 At Renewal Day I not only learned the answer to this odd question but also now know that they should be housed in the Display Cabinet rather than being threatened with demolition!

Trish Rosetto recounts that in 1966 she attended the regular VACA Meetings held at our Clubhouse, as a representative of Ivanhoe-Northcote Canoe Club (shock horror! An unhappy circumstance that meeting Foster thankfully resolved). These meetings were held in our clubhouse as other did not have such a building space. Attendees often greeted by our non-financial, furry-bodied, members as they scuttled across the floor and rafters. These were reported to be possums rather than Rattus rattus.Trish says that the space “was chilly” and pointing at our two long benches, announced, “these benches were very hard to sit on”!

As many of you will already know, our club members built the first Clubhouse themselves in the late-1920’s and by the 1960’s the fabric of the building was under considerable distress and labelled “condemned” by the local city council in late 1970’s. This meant demolition and, ultimately, our club members constructing our current, wonderful, A-frame clubhouse. These two long benches are all that remains of this first clubhouse and were probably made by club members of the day too. 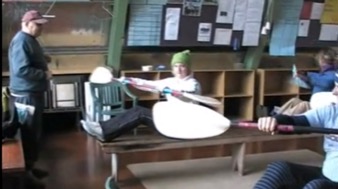 I suspect many of you were first introduced to paddling by Zoltán Szigeti on Sunday mornings, your first lesson being seated on these very benches. I certainly do. These benches are to be treasured, as is Zoli.

Check out more of, the late, Zoli on our website History page as it will teach you a lot about our club and its heroes. 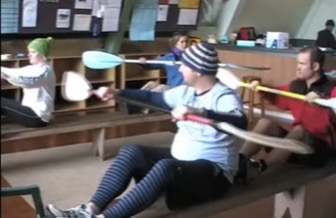