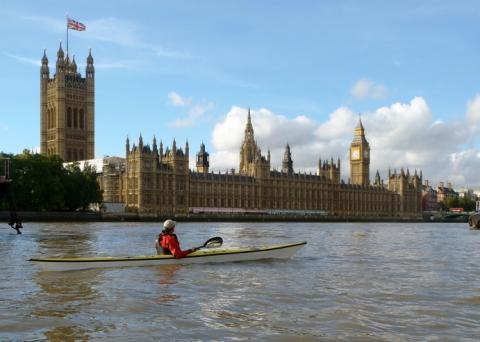 When I knew that I would be visiting England in early October 2013 my friend, Paul Newman with whom I was staying and with whom I had previously paddled at the World Masters Games in Canada, suggested we paddle the Thames River through London. It sounded easy, but it is actually a distance of around 30kms on a busy metropolitan waterway. Nevertheless such a unique opportunity should not be missed. I immediately said yes. It was only later that the doubts started to nag. Was I fit enough for this trip? Could I paddle that far? Could I manage the rough water? On the positive side, Paul has vast experience paddling the waterways of Southern England and has done this particular trip a number of times. He is also very organized and thorough in his preparations. 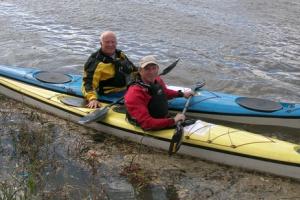 A few days before the day of the paddle we checked the tide charts to determine which was the best direction to paddle. Clearly we wanted to be paddling with the tide and not against it. The chart indicated that on the day of the paddle high tide would be at 3.00pm, which meant we could start around 2.30pm, and paddle west to east towards the Thames estuary.  Our destination would be a small landing, accessible by car, just beyond the Thames barrier.

Paul’s friend, Keith dropped us off around 2.00pm at Barnes and by 2.30 pm we were on the water. We had originally decided to paddle the Thames in a K2 but had a change of mind and opted for fiberglass sea kayaks. This proved a much more comfortable option for seeing the sites of London, albeit a little slower.

The first hour and a half was spent negotiating the changing tide and the sea kayak. The tide did turn, which increased our speed and around the same time I began to feel more comfortable in the boat and confident that I would complete the journey.  We passed under a number of bridges during this first section of the trip, and at the Vauxhall Bridge we had our first glimpse of the London Eye off in the distance. By this stage the outgoing tide was starting to gather momentum and it was important to concentrate around the bridges to ensure you did not paddle too close to the piers.

Up until this time the only traffic on the river had been some yachts around Fulham and the occasional garbage barge moving the waste of London.

After Lambeth Bridge it was only a short paddle to the Houses of Parliament, Westminster Abbey and Big Ben. On the other side of Westminster Bridge was London Eye. Here the river narrows and the bulk of the tourist boats plough their trade. Consequently the river became quite turbulent and the flow increased noticeably. At this stage I was very pleased to be in a sea kayak.

At Waterloo Bridge the river takes a right hand turn, towards the east. We now paddled under Blackfriers, Millennium, Southwark, London and Tower Bridge in quick succession. Travelling along this stretch of river we could clearly see St. Paul’s Cathedral, HMS Belfast and the Tower of London. It was a very strange feeling to be paddling past these iconic sites.

Interestingly there was not much traffic on the river, however there were plenty of people along the south bank of the river, which is where we were mainly paddling. Between the London Eye and the Tower of London there were many tourists and plenty of drinking places where patrons would lean out and want to strike up a conversation. Most conversations were short and sweet as the tide swept you on to the next encounter. 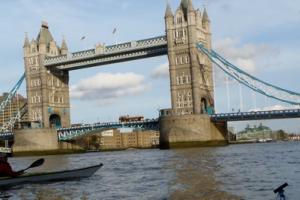 London Bridge is the last bridge over the Thames River. Now the river flows east past Wapping and the Basin marina where it turns to the south on a huge turn around the Isle of Dogs. This was a long section to paddle and at this stage I was thinking that the K2 might have been a quicker option, but as the large tourist ferries roared past I again realized that we had choosen well.

Greenwich and the National Maritime Museum came and went. We paddled past the Millennium Dome and finally the Thames barrier came into view. Our destination was about one and a half kilometers beyond the barrier near the Woolwich ferry.

As we passed through the barrier the directional lights were shining brightly as an indication of just how late it was. By the time we made it beyond the Woolwich ferry the sun had set and the light was fading quickly.

In all it had taken us a little more that four hours. To keep it in perspective, Keith who drove, took more than three hours to cross London and had been waiting only half and hour for us.

This was my second, long sea-kayaking trip in the last month. I realized that having paddled a K boat for a number of years, I did have the confidence to manage turbulent water. I would definitely recommend this trip to anyone who gets the opportunity to do it.

Second photo: Paul Newman and Michael Kane at the start of the paddle.