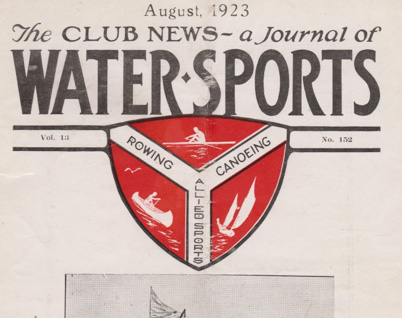 Copies of the sports journal “Water Sports” were found in a collection of papers kept by Arthur Howard. The excerpts below  reveal an interesting exchange between the Journal Editor and our Club secretary which finally gives a sense of the important role FCC played in the early days of paddling in Melbourne, and perhaps Australia. Our research demonstrates that our secretary created quite a profile in both the local newspapers of the day as well as, it appears, overseas too.

“CANOES THE WORLD OVER  Jan 1924 edition

Canoeing is not localized to the good old U.S.A by any means. Though the craft, as we are acquainted with it, is not well known across the waters, yet the idea has circled the globe, and as far away as Australia, they indulge in the sport to a certain extent. At Melbourne they have about three hundred canoes of various types widely scattered over the Island. The Victorian Canoe Club, which is affiliated with A.C.A., seems to be the only Club of its kind in Australia. According to George H.Rofe,  Vice-Commodore of the club, the water of the Bay outside of Melbourne is an ideal canoeing field. The Bay is forty-five  miles long, beyond which lies the ocean. There is a sandy stretch of twenty-five or thirty miles in length east of Melbourne. Brightan (sic) Beach lies about ten miles from Melbourne on the opposite side of Port Phillips Bay (sic).”

“NEWS FROM THE ANTIPODES  July 1924 edition

H.De La Rue of Northcote, Melbourne, Australia, addresses a letter to Water Sports, indicating a bit of dissatisfaction with an article appearing in the January issue of this year, referring to “Canoes the World Over”.

The Australian rightfully protests that canoeing is and has been an active sport in his country for many years, and Water Sports gladly rectifies its error in negligently overlooking that very progressive center.

The Yarra River and the Saltwater River (Maribyrnong of today) seem to be well fortified with active clubs. Among them we find the Fairfield Canoe Club, the Twickenham Canoe Club, Ryverbrynk Canoe Club, the Kew, the Essendon and, until recently, the Boomerang and the Hawthorn Glen Canoe Clubs. The latter two clubs, however, during the past year or two, have dropped in their membership until they are now practically inoperative. 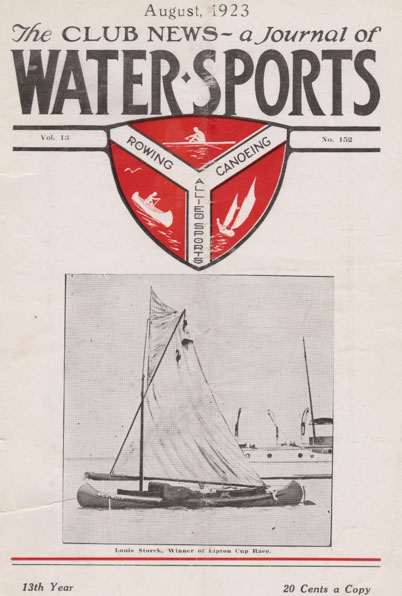 Most of Australian canoeing is conducted on the rivers, the ocean being too vigorous in its manifestations to permit of any consistent work there. It appears, however, that very little sailing is done in canoes, due to the lack of suitable waters.

The Fairfield Club seems to be the leader in the paddling events, being holder of the Merrilands Cup for singles, doubles and fours. During the first year of this club’s existence, it entered crews in the thirty-three events and emerged at the end of the year with twenty-nine firsts and four seconds to its credit.

“The canoes used here”, writes Mr. De La Rue, “are mostly home-built, canvas-covered, sixteen-foot models. There is a smattering of Peterborough, Canadian, Old own and Dean models, but the high cost of importation has prohibited many from buying such craft. These canoes cost about thirty to thirty-five pounds here, with no equipment, whilst home-builders can construct a splendid model for less than ten pounds……Victoria seems to be the only state  in Australia that indulges in canoeing, no report coming from other  states to inquiries made.”

Having made his contribution in 1924, our Club Secretary of the day, C.H De La Rue went on to become the Australian Rep. on the Editorial staff of “Water Sports” and regularly reported on the activities of both the Fairfield Canoe Club and the Victorian Amateur Canoe Association (he was Secretary of both ). In addition there were regular contributions from both the Elwood Sea Canoe Club and Twickenham Canoe Club.

“Water Sports” was a USA magazine, so quite remarkable that our Club appears in their journal. 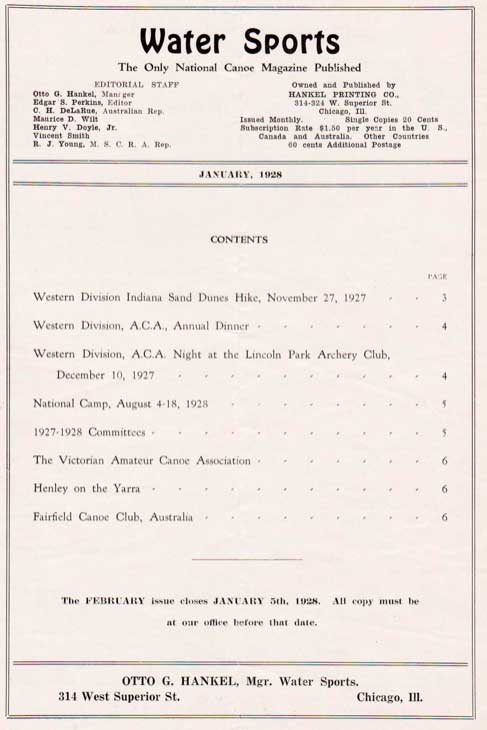