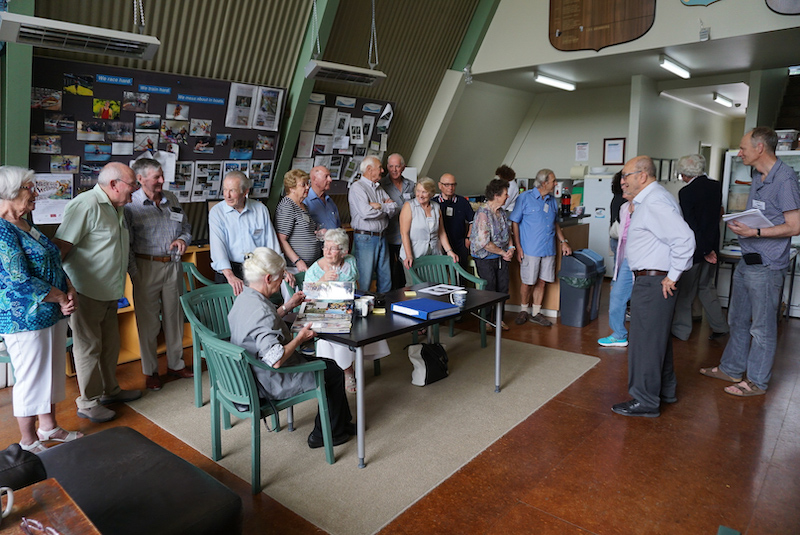 Tuesday 20th November found twenty Club Legends from the 50s & 60s gathered together by our two living Life Members, Marg Buck and Jonathon Mayne, to share a lunch to re-connect and unearth old memories to aid our Centenary History Group broaden our knowledge of the Club from a very different time.Needless to say, the History Group, with audio recording devices in hand, were hard at it capturing amazing (hopefully truthful!) stories of the day.

These stories that rushed forth were wonderful and the re-telling brought lot of laughs amongst old friends.

In addition, we received a number of old photographs and several printed items too. All the while, Lofty, with his trusty camera, was recording the event too.

The event was due to finish at 3.00…….but some of our Legends were still relating stories as they were led out to their vehicles, a few of which had been idling for some time waiting for them!

Here are a few of their tales’

Fred Wasmer was a keen paddler in Hungary and when he came to Melbourne in 1956 he was in search of a Canoe Club to continue his passion and make connections in his new found country. In 1958 Fairfield Canoe Club was the place he chose. The club was handy and he soon discovered there were a number of fellow countryman at the club, including Zoli Szigeti. Being an ex-Olympian (1956) , Zoli had formed a group of paddlers to train regularly together. The group included Ivan Gaal, “Little” Heidi, Margaret Buck, Heidi and Eilke Sager, Ingrid Bendeler and Jan Smith. Fred said that this was unusual at the time as the club was more centred around social paddling, particularly when the weather was fine and on weekends. The sight of this group going through their drills, paddling all week and in all conditions, looked a bit odd to the other members and they were soon dubbed the “silly group”.  As it happened, the “silly group” started winning many races and making a name for themselves which culminated in Olympic selection.   How silly were they? 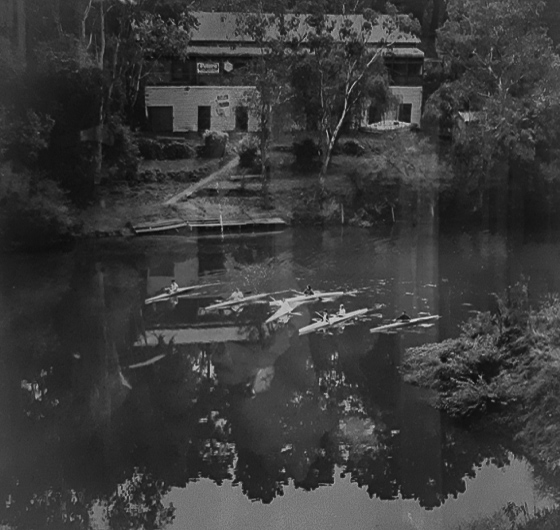 For many years, Adrian Powell used to come to fish on the Yarra at Fairfield,” it was straight down from my place going through the old timber yard”. Having seen “a fella paddling past in a Canadian & I thought I wouldn’t mind getting one of them to go fishing in, so I bought this old boat, really old boat it was, and it was leaking”. Being a plumber by trade, Adrian knew what was needed, the “stuff we used to use on the gutters and I painted the thing”.

Having paddled the old boat up and down the river, “ Jonny Mayne said to me one day,” why don’t you join our club? It is cheaper to leave the boat at the clubhouse.” Now he had both a boat and a Club. Next thing, Jon suggested he try out in an upcoming regatta, however Adrian felt his old boat was not good enough. A loan boat saw him go “ pretty well.  Paddled with a girl, and the girl and I won. It was pretty good, so I thought might have a go at this ‘racing’. This was 1957 when aged 16. His first training session in a racing Canadian saw him struggle 100m up to Rudder Grange.” I was very shaky. So that was my first training run. So I started to do a bit more training, and a bit more training, and then I started to race”. He went on to win his first Australian title in the 10,000m when aged only 16 and with only 6 months paddling under his belt. 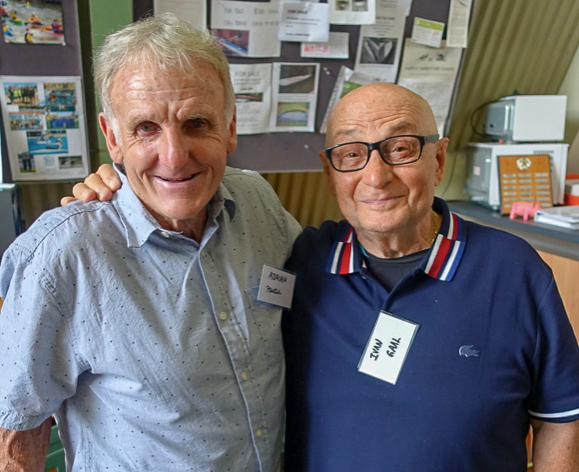 At this time a plumber had to ‘screw the threads’ on the pipes which meant “I was getting pretty strong”. The next year he trained pretty hard & managed to win the Australian titles from Jonathon Mayne who had been the current champion. Clearly, as seen at the Legends Lunch, Jonathon has “never ever held it against me either! We’re still mates after all this time”.

“Our non-starting Olympian”, or, “How times have changed”

One of the members of this ‘Silly Group’, Ivan Gaal, had come third in the the Hungarian C2 Junior Championships in 1956, before fleeing the Revolution to Australia that same year. He then joined FCC and the ‘Silly Group’ and then after successful Australian Championships, won a place with Adrian Powell in the C2 crew for the 1960 Rome Olympics. It is one thing to qualify, and yet another thing to be able to afford the privilege to be able to afford the cost of the trip. Ivan could not fund his Olympic trip and missed the Rome Olympic Games as a result. A far cry from the extraordinary support for our Olympic athletes today. Great work Ivan. His name appears on our Honour Roll of ‘Olympic Selections’.

We have a lot of recorded interviews that are needing transcription Can any Club members help us?