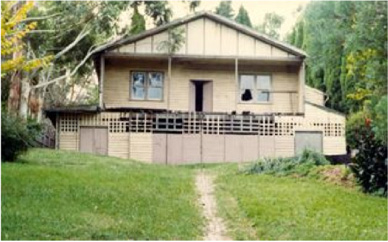 March 16, 2018, sees the return of picture nights to 9, The Esplanade. History tells us to be aware and be on our best behaviour!

In the heady pre-TV days of the 1940’s and 1950’s, the Club played a much broader role than simply canoeing on the Yarra, rather it was a social club of ready and cheap entertainment for the neighbourhood, with dances, smoke nights and film nights being regular entertainment.

However, in December 1950 they ran into a problem and legal opinion was sought: “Dear Sir, Could the above Club ask you for some little guidance or information about a matter that is occupying the serious thoughts of our Committee.

For very many years this Club has been functioning very happily in this district and to our way of thinking, doing a good job with youths and older members from the surrounding districts. But for some little time now, a nearby neighbour has been making many complaints directly to the Club officers and on one occasion to the police.

These complaints seem to be mainly on account of any noise whatever, that comes from our Clubhouse. Twice a month on Sunday evenings we hold a picture entertainment (16mm film) for the general enjoyment of members and friends; these nights now conclude at about 10.15 or 10.30 p.m. with as little noise as possible. Also there are times on Saturdays (not very often) a dance is held to keep members together. To all these activities we have the usual complaint.”

In answer to the solicitor’s questions these responses shed light on the nature of FCC activities during these different times:

“Our Clubhouse was opened early in 1928, after a commencement of building operations in 1925; the long period of building was caused by the whole of the operations being carried out by voluntary labor (sic) of the members. Social functions were held regularly from the opening until the outbreak of war, when most of our members were in the services. At the conclusion of the war, a steady return  to club activities took place, and for some period now we have been holding picture nights twice a month on Sunday evenings, and dances once a month.”

“….These letters (of complaint from a neighbour) explain noise from his angle, we can only say that he appears to have a very strong dislike to music in any form, any orchestra we have for dances much too loud for him. We admit to foot stamping in the early stages of our picture nights, but these are down to hand clapping now”

Enjoy Casablanca on March 16th, but keep the foot stamping to a minimum please!