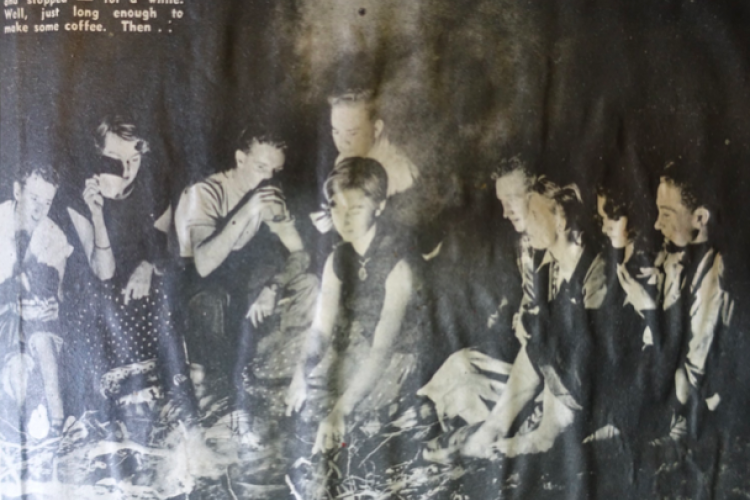 Rummaging through Arthur Howard’s old scrapbook of newspaper cuttings relating to canoeing, we came across this “classic” from the POST that verifies our earlier snippet on this willow-covered enterprise.

“Circumspect Melbourne doesn’t quite know what to make of the frequency with which some of ots young people go up the river these nights.

If canoe parties are counted, there has been more traffic on the Yarra after dark than before it lately, and it is the canoe parties which are concerning the nosey.

Melbourne, as it is sadly known even in Melbourne, is a chilly place onwards from autumn, yet on the marge of the mists of May the canoe clusters - a boy and a girl to each canoe – are still paddling upstream and drifting back much later, somewhat un-clustered.

And –as some Yarra folk ask themselves in the stately houses on the banks as paddles glint in the gloom below – is it safe? Whichever way you look at it?

We went on a canoe party with a camera. There were no party rules against candid pictures, but although canoes can be silent things and flashlights give a warning rattle, we got NO pictures we couldn’t publish, given a heart.

The canoeists told us that they took up canoeing because it was cheap and simple. Canoodling, they pointed out, might have had something to do with it, but canoodling does not depend exclusively upon canoeing  – canoodling in a parked car, for instance, requires less muscle and no sense of balance at all.

“Didn’t feel it at the time” a thoughtful canoeist murmured as he edged upstream, “but I suppose we were bored with all those crazes. Jitterbug crazes and square dance crazes – anything-we-do crazes. Canoeing’s not so noisy. Not so crazy either. I’m sick of crazes, see? I’m even sick of being called a teenager. Right now I am a youth canoeing.”

He wiggled his paddle and wafted his canoe and partner into the solitude midstream.

The canoes we were in were let out at 10/ each by Clive Caporn, owner of Rudder Grange boathouse, Fairfield, our starting point.

He grinned when we told him we planned to go to the Burke Road bridge,  “Most people don’t get farther than the first willow tree about 100 yards down. I reckon they get side-tracked” he said.

Well, we had been rather optimistic about reaching the bridge, which is four miles upstream, but we got farther than the first willow.

Between arguing as to where to stop for supper, and waiting for canoes that had quietly disappeared, the party paddled about two miles. Then the survivors headed for the bank. The only drink taken along was coffee. Canoeing, after all, is very safe. For one thing, if anyone did happen to get tight, he couldn’t be risked paddling a canoe. 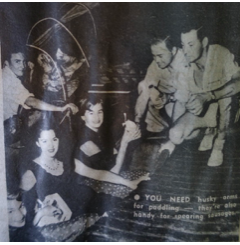 We had on board 96 sausages which were grilled over an open fire. The coffee essence and half a jar of sugar were put into a saucepan, topped with milk, and boiled over a Primus. We had done enough canoeing to like the taste of this.

Mal Bryning (the only expert canoer present) had been busy all the way unpicking canoes from snags, and photographer Frank Grant had almost overturned his canoe half-a-dozen times by standing suddenly to take pictures.

Here and there the Yarra had yanked at our canoe, and we asked about this. The boys said boatman Caporn drilled into them so much, and they had to stay sober to canoe at all, that they were less apt to take risks than if they were driving cars home from ordinary parties.

As for the other way of looking at it, the strong moon is needed to see with, and the boys have to have husky arms to get anywhere at all in a canoe.”