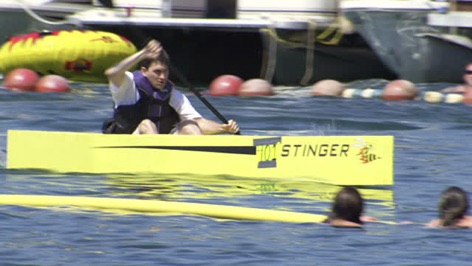 During a recent interview with FCC Board Member, Foster Rossetto, a poorly recognised and, seemingly, unrecorded funding source for our club was’ brought to the surface’.

Foster reports that in 1986 they noticed  there was a cardboard boat race coming up. This new event was part of the Moomba Festival and was to be held on Albert Park Lake as a promotion for a number of the cardboard re-cycling and manufacturing companies.  The cardboard materials could be sourced From these companies, with the craft themselves having to be built to quite specific construction specifications;   ”A K2 purposely built in cardboard, you couldn't use staples, timber reinforcing, nothing. it was just glue, and the glue had to be wax . So (as) they made wax cardboard all you'd do is just melt it and join the two together and then strengthen it accordingly “.

An added incentive to enter this event was the lure of the $5,000 prize for the fasted boat over the two kilometre triangular course. It just so happened that at this time, as result of lack of funds, our new ‘A-frame’ clubhouse was far from complete. In fact, it did not even have the timber floor, just the concrete base of the open boat storage area.

However our financial fortunes were about to change…..“ As luck would have it, one of the research chemists from Visyboard was boarding at Margaret Buck's place. So she chatted him up and they (Visyboard) actually built the boat for us.” Thus we were a de-facto "Visyboard Team"!!

Having looked at the flimsy cardboard K2, our astute leaders determined;  ” Geez we can't put in two 90 kilo guys in this, so the first year we actually put in two of our juniors, Tomas Szigeti (Zoli’s son) and a young girl called Prue Power.”

Our two intrepid paddlers were somewhat overawed at the ex-Olympians they were lined-up against, but our canny leadership made the correct call as their equation formula had predicted:

Remembering of course that none of the competitors could practice for the event as the craft were strictly single-use only!

“Lo and behold, Tomas and Prue they got the fastest time.” So we won the five grand, making an educational grant to each of our paddlers and $3,000 went to our building fund.

The following year saw Tomas teamed-up with David Hitzler, the President's 16 year-old son, and once again, "lo and behold" they won! So that was some more money that came into supplement club funds.

“In 1988 they didn't do it for us but we had John Doak ( later Olympian)  as a club member and  he paddled with his brother Bob,mind you, Bob and John were the Australian Champions. The big competition being John Sumegi and Crosby Baulch who had been to the Olympics, but still Bob and John won the money for the club.”

Evidently the money wasn't as big that last year, 1988. In fact, “it was then that a kerfuffle happened. People had never seen so much money for a canoe race, so people, all the better paddlers, thought they would enter to get the money for themselves, but the following year...nothing. The race didn't run again.”

However after the 1988 event, FCC organisers Joe Alia and Foster Rossetto were each presented with a tankard, by the people from Visyboard, as a memento of our final victory (pictured). Their Visyboard boats being great publicity as their products were the cardboard boats that stood the test of time! 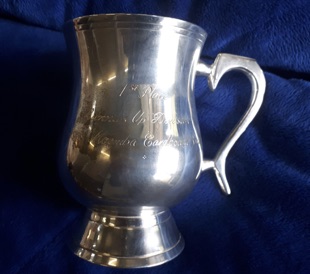 So, we got our $7,000 flooring as a direct result of our club members Moomba successes.

Unfortunately, in spite of many queries to involved bodies, we are yet to find a photo recording any of these races. Please let Hamish know if you have a photo.

In the meantime you may enjoy looking at these YouTube links to some recent cardboard boat regattas held elsewhere.