Who is L.D. Turner ? History snippet 9 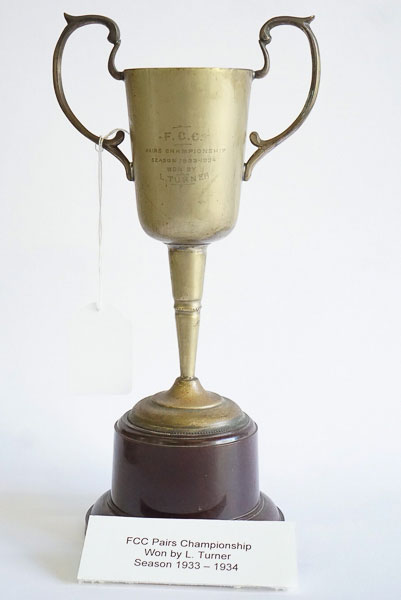 The History Interest Group has been busily beavering away researching FCC archived materials as well as cataloguing other unresearched material. This led us to explore the contents of the FCC display cabinet Have you ever looked into this cabinet? If you haven’t, you should!

Lofty was photographing several trophies in the name of L.D.Turner, 1931. Who is this man you again ask?

Well it transpires that he attributes FCC and canoeing as having saved his life. We uncovered this article published in The Sporting Globe, Saturday 8th March, 1930. 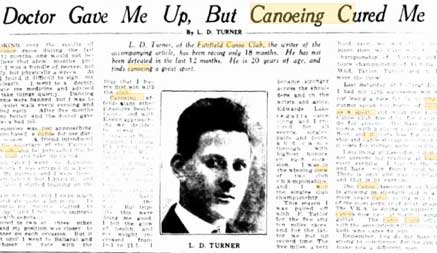 L.D Turner, of the Fairfield Canoe Club, the writer of the accompanying article, has been racing only 18 months. He has not been defeated in the last 12 months. He is 20 years of age, and finds canoeing a great sport.

“Looking over the results of canoe races during the last 12 months, one would not believe that a few months previously, I was a bundle of nerves; not mentally, but physically, a wreck. At times I found it difficult to sign my name clearly. I went to a doctor, who gave me medicine and advised me to take things quietly. Dancing and tennis were banned, but I was to have a quiet walk every evening and go to bed early. After five months I was no better, and the doctor gave me up as a bad job. The summer was just approaching, and I purchased a canoe for use during the season. A friend introduced me to the secretary of the Fairficld Canoe Club, and he persuaded me to join the club and take up racing.

A week later I went to Edwards Lake, where I was entered in a pair race. My partner and I were hopelessly left behind, but 1 liked it, and a week later I started training on the river.

It made me tired and I slept much better and ate quite a lot more. In two months my nerves started to "steady up," and 1 felt much improved in health generally. 1 entered in two or three other races, and my position was closer to the winner on each occasion. But it was not until I went to Ballarat and was chosen to race with the four that I had my first win with the club.

Canoeing affords many other pleasures besides racing, and with Easter approaching we decided to spend the holidays at Warrandyte. Leaving T a 1 r f [la.i.llcd i eld. Wa r-hard nrk (illegible print) way. But trips like this were doing me good. I felt the glow of health, and my weight increased front 10.3 to 11.1. I became stronger across the shoulders and in the wrists and arms. Edwards Lake regatta came along, and I entered for all events, singles, pairs and fours, and came through with highest honors on each occasion. I was in the winning crew of two club championships, and I won the singles club championship. This season I was paired off with F. Tailor for the five and ten miles races, and for the latter we put up record time. The five miles, a very hard race, we won by a length. Since then we have  won the pairs championship of Victoria and the fours championship of Victoria. W. Wild, Taylor. Turner and A. Luke were the crew.

Last Saturday at Ballarat Regatta I had my 12th successive win without losing a race for 12 months. I cannot speak too highlv of canoeing as a sport, and what the Fairfield Canoe Club has done for me it can do for anyone. We have fine club rooms, with a player piano and dance floor, and it costs less for membership and canoe storage combined than it costs for storage alone elsewhere.

I am living at Essendon. but it does not prevent my training at Fairfield I every evening. I take to the river and have now found real health.  There is only one way to retain it, and that is by exercise.

The Canoe Association of Victoria is growing in strength and in a few more years canoe racing will be one of the most popular of amateur sports. The V.R.A. is giving us support, and canoes now race at many rowing regattas. The canoe clubs affiliated with the association will welcome anybody who cares to join.

Remember, you do not have to be strong to commence, for we can soon make you a different man.” Who are our other heroes?

We are looking for those unsung heroes of our Club, as well as documenting those successful on the water. Please forward your nominations to our Centenary History Interest Group through this column.