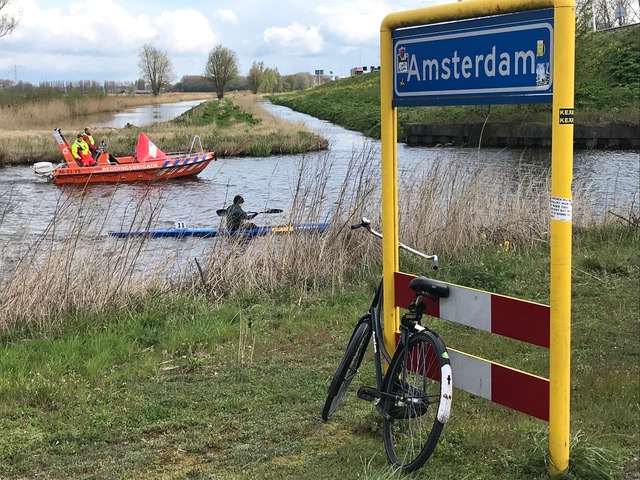 When it looked as if I would be in Amsterdam during April for family reasons, I thought it would be a good chance to do the Waterland Marathon race.
I have watched the video of this race on numerous occasions. It is one of the ICF World Classic Marathon Series races. It looked like a way to see a different side of Amsterdam.
It also gave me an aim in my training.

The race is run by the Viking Kayak and Canoe Club. There are two distances - 23km (and two portages) for the open men and women and others who wish to do it, and 14km for the juniors and masters women. What could  be difficult? You train, organise to hire a boat, enter online, and turn up on the day! Entries had to be in ahead of time, but the payment was just 5 euros and that transaction occurred on the day, along with a deposit for the race number. Boat hire was 50 euros. PFDs were optional.

As many of you will know, organising to hire boats overseas is never easy. The race organisers have new Nelos which are available for 'teams from countries’ . These are for the world champions from Britain and Ireland, South Africa, Hungary, and Spain. Various contacts were chased up by my son Angus, who is living and working in Amsterdam.

This led to a promise of a Vajda K1, but it was a fairly vague promise and there was concern about how I would get it to the race start. To get to the course, I had to catch a train, and then be picked up and driven to the club by Angus in his van (which is garaged outside the city - he accesses this by bicycle - as no older diesel vehicles are allowed into the centre of Amsterdam for pollution reasons). Then I had to get to the start of my race, quite a bit further along. There were times when it did seem that no boat would be available. In the end, I did find someone who was hiring skis and would bring them to both the club, and to my race start, so at least I had a boat.

Meanwhile I was trying to train in different boats at home, knowing that I had to be able to paddle whatever I was given.

The other difficulty was that it is hard to train when one is travelling. I did manage to do one training sessions at the Richmond Canoe Club in London, but that was 12 days before the race. After that I was walking in the Outer Hebrides.

So I turned up for the race without my water legs, climbed into a boat that I hadn’t paddled before, and set off on a course which I had never seen, knowing no-one who was in the race. At least the briefing was in English.

The weather wasn’t favourable. The temperature was  5 degrees, with a little snow, and a lot of wind, (and no shelter in a flat country).  The course is quite variable, as one paddles along canals large and small - through the polder country.  The canals were sometimes wide, and sometimes quite shallow and narrow, but there were appropriately placed yellow arrows to prevent me getting lost. I went through farms and grasslands and could smell the cows. For some of the course I was able to have supporters following me in the van and on bicycle. They weren’t enjoying the weather conditions either. 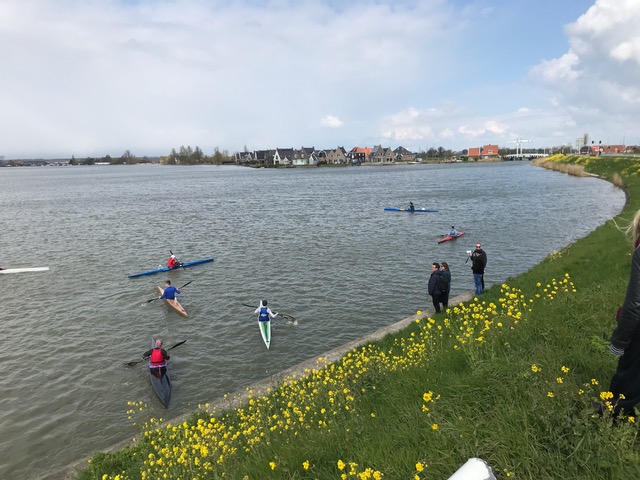 My race (the 14km distance ) commenced at Monnickendam. We started on a lake next to a large dike and the site of the first portage for the longer distance paddlers.  My boat was a Nelo ski - very light, very narrow, and with a small modification to allow me to sit a bit higher. It was a lovely boat, but in the cold and the wind, and on an open lake, I was a bit nervous, and found it hard to get a rhythm. I didn’t know where the starting line was, so when I was recalled to a narrow area, I was concerned, as I was blown onto rocks. Keen to protect the boat
form damage, I ended up having to get out and move to a safer place to avoid the rocks. By this stage, the race was underway and I was already a fair way behind. Not daunted, and being used to that position, I headed off, and slowly watched the 23km paddlers pass me one by one. I was able to play the game “spot the champion” as they came past.

There was one portage for those of us doing the short course.  It is an unusual one where the paddler has to land the boat up on the shore. I have never tried this before, and guessed that some momentum was required. This was somewhat hindered by the wash of the open men, and whilst I did get the front of the boat up onto the shore, the cockpit and I stayed over water. There was only one way out - I jumped in to the water hoping it would be 1 foot deep. It was 4 feet deep. I clambered out, picked up the boat, walked the portage over the marshy area (time no longer seemed important) and paddled on through some very shallow water.  I tried to go faster as I became colder and colder. 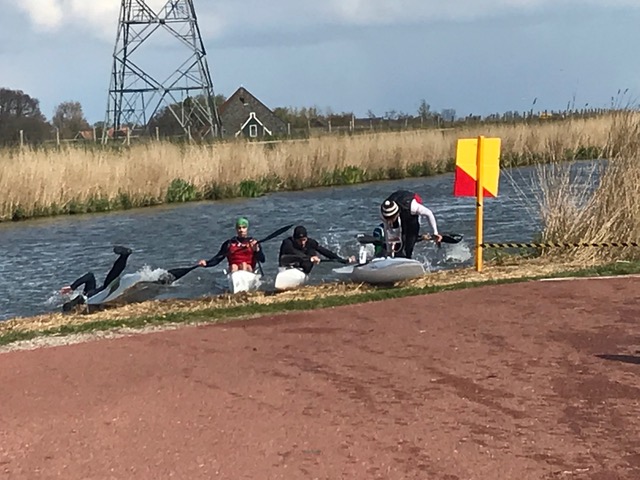 The water got choppier as I got onto a larger canal, and my brace strokes proved useful . There were a few 90 degree turns, and little bridges that reminded me of a van Gogh painting (though the grey weather didn’t allow for a palette to rival Vincent’s paintings). At one stage I passed a ferry that was sitting in the middle of the canal  waiting for me. Don and Angus and his friends occasionally passed me on bicycles, pretending that I was almost there, but there were long periods of time when it seemed like just me and all the tussocks of grass. It reminded me a bit of the Bridge to Bridge race.

I did feel that my rhythm and speed improved over the last 3km but was pleased to see the finish line , and decided to forego the Red Bull drink offered after the line. I needed a hot shower, and was pleased to have finished. My support team waved orange flags as I finished - it seems that I had been entered as a Dutch national. Their little joke?

It was an interesting course, and a lot of fun. I would like to do it again, but quicker next time.

I would like to thank my team in Melbourne - Dasha and Alex, and my support team in Amsterdam - Angus, Veerle, Don, Dimity and Linden.