The longest canoe on the Murray - History Snippet 10 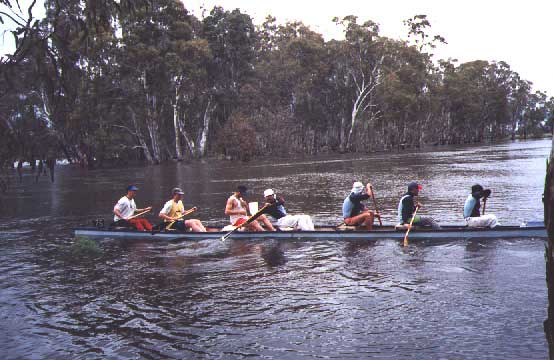 In 1988 seven Fairfield members paddled a very heavy C7 down a flooded Murray River at the Echuca Mini. Paddles hit  picnic tables and BBQs, as the canoeists cut corners on the Murray. In this history snipplet we tell the story of two the FCC C7's that paddled the Echuca Mini and two Murray Marathons.

The first club C7 was transported to races in two halves, and bolted together on the morning of the race. One or two containers of silicon was added to the seal and the canoe had a distinct warp - and mostly kept afloat. In the first Murray marathon, somewhere on day one, the canoe hit a snag. Seven drink bottles, life jackets and an assortment of snacks were floasting towards Swan Hill. The  seven Fairfield members tried desperately to retrieve the damaged canoe. A family camping near bye came to the rescue helped the team retrieve the boat, belongings and paddlers, and somehowe managed to repair the boat.

The crew getting ready to paddle in the Echuca mini. Photo: Unknown

The crew learnt a lot from their first C7 Murray Marathon. They purchased a racing C7, made of wood, without a hint of sliicon. The canoe was a lovely design and really well made, the only problem was that it was kneeling C7. After adding seven seats to the canoe the team spent two months learning to paddle a very tippy C7. With lots of swims, the team finally managed to keep the boat afloat and steer in a straight line. The FCC crew still holds two day and the overlall distance record for the class.

The C7 was not easy to turn. Our 'stroke' Joe Alia would call out to canoes and kayaks as the C7 approached from behind. "We are on your left canoe number 69" With a metre to go, just before impact, Joes instructions would change to "we are on your right canoe number 69". On more than one occasion the C7 would nudge the boat in front and it would be left facing upstream.

In 1988 another FCC C7 paddled the Murray Marathon. Notable members in this crew were Julian and David Ross, and that's a story for another day! 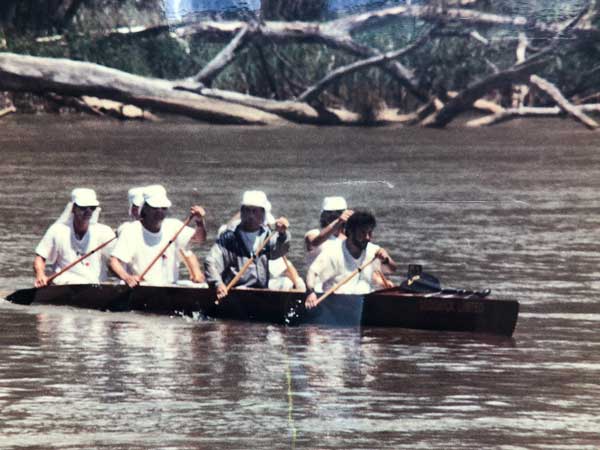 The racing C7 on the Murray. The crew changed sides every 20 minutes.