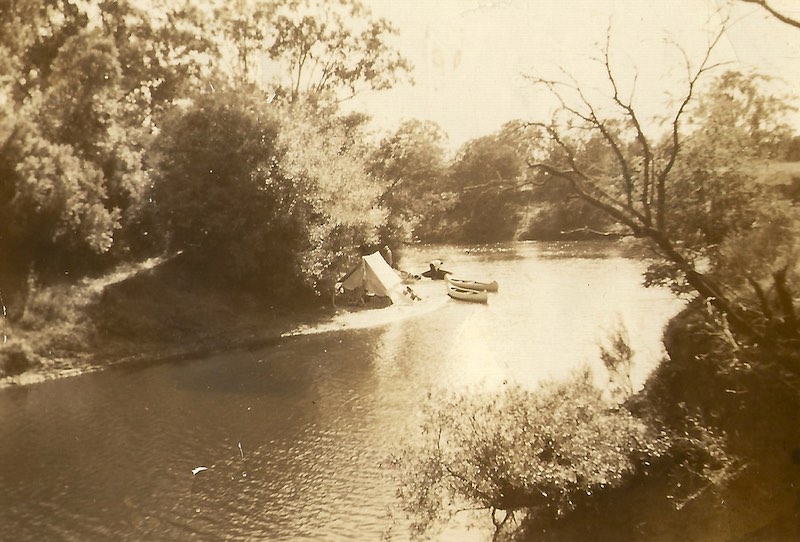 What did you all get up to this Easter break? Ninety-five years ago our club members joined the inaugural VACA Easter Camp held at Warrandyte. The Victorian Amateur Canoe Association was re-formed in 1925 with FCC being a leading-light in this forebear of Paddle Victoria. The inaugural Secretary of both FCC & VACA was one C.H. De La Rue who reports at length on these camps in the American journal “Water Sports”. Clearly it was no mean feat to undertake this camp as these excerpts will attest. That being said, they evidently also had a lot of fun!

The idea for a camp at Warrandyte was established after two canoes from Elwood Sea Canoe Club travelled from their club upstream to Warrandyte, some 50 miles. The Elwood ‘Seahorses’ were then joined by canoes from Twickenham, Fairfield, Chipperfields and Heidelberg, a total of eleven canoes and twenty-six canoeists.

The trip to Warrandyte was accomplished in easy stages over several week-ends and all foregathered at the camp on Easter Friday.

“On the way up, the river was fairly low. In the Heidelberg to Warrandyte section, the canoeists camped at Templestowe. Portage of canoes was made at Pound Bend. This is very heavy but saves all of five miles. Some idea of the country and conditions of travel may be gained from the fact that a crew of two in their canoes on the return trip made the down stream distance (cut off the portage) in not less than forty minutes, and that with shooting every rapid to save time.

On arrival, Camp was pitched half a mile down from the Warrandyte Bridge and on the opposite side of the river to the Township. Other than a very long and difficult detour after crossing the bridge the only approach was by canoe “ferry”. An excellent landing was found within fifty feet of the camp site and a splendid swimming pool was at hand with rapids just above which the “troops” continuously “shot” for practice”.

Reading between the lines it sounds as if quite a bit of “high jinx” took place:” Cleanliness is next to godliness. D.S., in a state of childlike simplicity, insisted on swimming at 2.00AM and seemed to enjoy it.” “Who amongst “Twick” owned the 33,000 candle power light? Great fun to light up on the night of arrival. Having got wet they had to flood the petrol while heating. Up in flames several times:

‘Twickies’ had a little lamp

‘Twas made for kerosene

They filled it full of petrol once

It has not since benzine!

“Henley on Yarra (Warrandyte) aroused a lot of interest and shortly there were over 200 spectators from among the residents and holiday-makes. With eleven canoes and twenty-six canoeists there were about twenty entries for each event. The Course (120 yards) was uneven as there was a strong current in some parts and backwaters in others”. Events included: sculling championship (paddles used as oars), Tail-end race, Gunwale Race, Kangaroo Race, Paddle War, and the final event Canoe Eights less Two (six men in a sixteen foot canoe paddling with their hands).

“ After the stunting was over, the “Mayor” of Warrandyte (Norm Ailbert of VACA) arrayed in peaked hat, flowing robes of honour (a patchwork quilt), several medals , and the order of the Crater (billy-lid and a suspender, wrapped with coloured paper) shot down through the rapids, accompanied by his personal attendant and the Cup-bearer, and landed on the river-bank. He inspected the Guard of Honour, and after addressing the multitude with great emotion and long and extraordinary words written on a piece of paper, neatly paragraphed by regular perforations, presented the ornate Loving Cup to the winner of the afternoon’s event, CB Edwards. The Cup, by the way, was cleverly made up on the spur of the event from jam tins, soldered together and decorated by pieces of tablecloth tied in knots.”

This trophy lived-on for presentation at subsequent Easter camps as the “Warrandyte Cup”. It is also noted in 1927 that: “The Fairfield members slept in their canoes on the river, having provided themselves with good covers for the purpose; this idea having been on use for some years by them.” 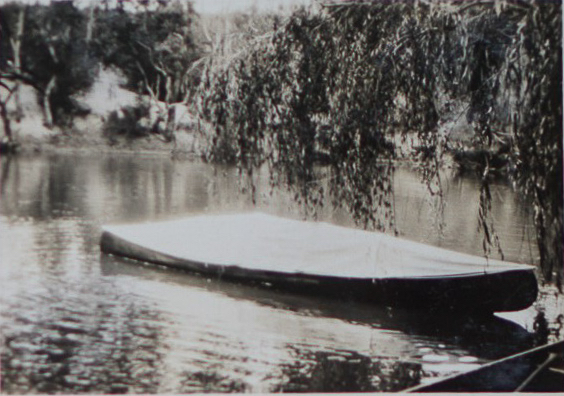 The 1928 camp report also notes: ”The same arrangements as last year were made for getting to the rendezvous, viz: Canoes left several weeks ahead, and paddled in easy stages each week end before Easter. This method gives members the full holiday time in camp, and also does not mean such strenuous work paddling right through. According to reports, there were some very exciting moments on the journey upstream, when members had to negotiate some of the more difficult rapids.

The homeward journey downstream, at the break of camp, was filled with hair raising moments and thrills. Of all those making the trip down, all except one met with disaster in the shape of an upset at some particularly treacherous spot (& there are heaps of them too). The only one that did not upset, managed to ship plenty of water and was very near to going over. This particular canoe happened to be an Australian-built “Johnstone” model, and was the only one of its kind on the trip this year.

However, everyone was quite happy, and all arrived home quite safe, although perhaps minus some skin off shins, where contact was made with rocks. All anticipate being well in the advance guard for the camp again next Easter.”

This is the last record we have of the VACA Easter camp at Warrandyte. However this new policy proposal (March 2021)could lead to a revival?

“The public could be permitted to camp on any river bank in Victoria, including the Yarra River, under a proposal put forward by the state government.

Under draft regulations put forward by Fishing Minister Melissa Horne, the public would be permitted to travel across privately-owned farmland to set up camp.

Once on a riverbank, Victorians would be permitted to camp there for up to 28 days”.