Henley on the Maribyrnong - History Snippet 8 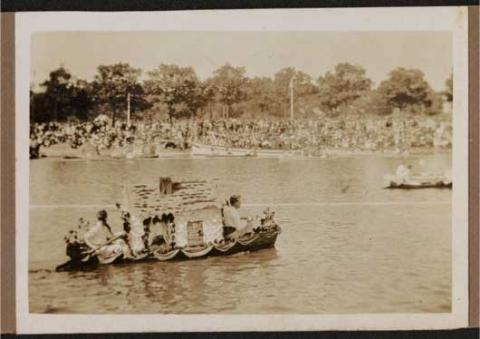 Henley Regattas’ were all the rage in the 1920’s. This description reflects that. Note the mixed of  rowing and canoeing events. Also note the inclusion of women on the card.

Henley on the Maribyrnong River was held on Saturday under the auspices of the Essendon River League in bright weather, and, though nearly six years have elapsed since the regatta was previously held, it appeared to have lost none of its popularity, for nearly 10,000 people attended in the afternoon and evening. Houseboats were provided by the mayor and councillors of Essendon. Bright costumes and gaily decorated pleasure boats and canoes added to the gaiety of the scene. Sideshows and stalls were dispensed with on Saturday, and The regatta, which resolved itself into a great social function, interspersed with racing was regarded by the Honorary secretary (Mr C G Carter) as the most success ful of the series. Since the last regatta nearly £3,000 has been expended in making improvements on the river and its environments. A new rowing pavilion has been built at the northern end of the river, rockeries made and gardens laid out. About five years ago the State Treasurer promised an additional £2,500 to carry out further improvements but owing to the war the money was not claimed. Last week Mr Ryan, M L A, accompanied by the mayor of Essendon (Councillor K H Kinnear), waited on the treasurer (Mr McPherson) and obtained the grant, which will be immediately utilised.

Keen interest was taken in the rowing events and canoe racing created interest. The Ladies' Championship Fours of Victoria was splendidly contested and was won, after a hard race by the Albert Park four. which consisted of the Misses F Briooks (stroke,) R Sullivan (3) L Partington (2) and E Brooks (bow) by half a canvas. Bendigo - the Misses Elder (stroke), Oldfield (3), Oldfield (2), and Brownlee (bow)- was second. The canoe champion-ship pairs was won by Fairfield (A Lukey and D Coleman) from Maribyrnong; and the final of the canoe open fours was won by Fairfield. Victorian Canoe Club filled second and third places. The final of the canoe open mixed pairs was won by Fairfield (A Lukey and Miss Miller) and the final of the Anglers' Boat Race was won by Essendon. Richmond was second. Excitement was provided by aquaplane riding by Mr W Halling and others. Other events resulted as follow: -Maribyrnong Ladies' Fours - Misses Connor (stroke) M Cain, N Pye, L Partington (cox ). River League Fours - Fawcett and Johnson, dead heat.

In the evening the houseboats and other craft and the river banks were illuminated, and entertainment was provided by a fire works display and an open air concert by the Essendon Operatic Society of 100 voices. Mr H Schwieger acted as director of events.