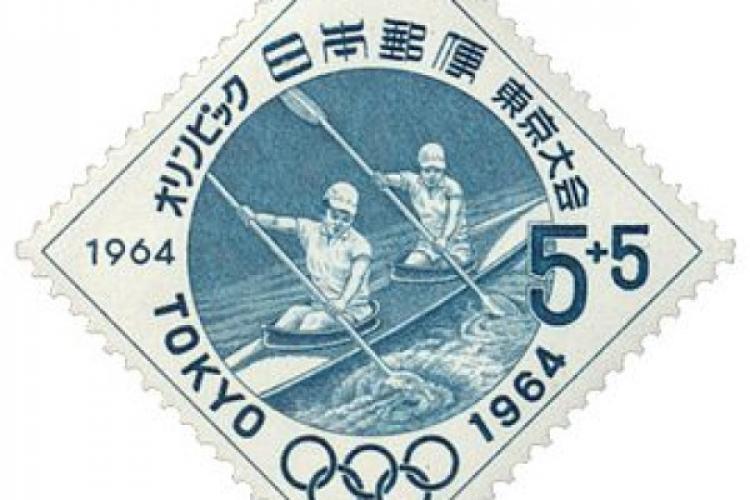 Our Olympians those 57 years ago were: 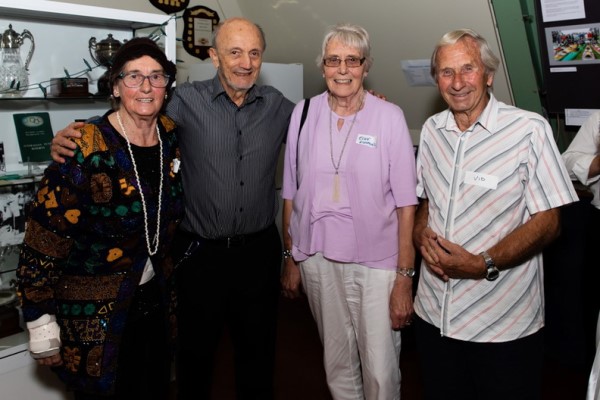 What is amazing about Marg’s story is that she first stepped into a canoe in 1961 when she joined FCC. Next thing we know…… she is representing Australia in Tokyo 1964.

It transpires that upon her selection, the “local Ringwood community got behind me, and raised enough money to buy a new boat from over in Denmark and it was delivered to Tokyo directly, a timber, double ply, beautiful boat”. As a result, Marg had to train in unfamiliar surrounds mastering her brand-new untried craft!

Marg goes on to explain: “When we got to the lake all these other teams were out with their motorboats & their coaches, which we didn't have in our team. This meant the water was rougher and this water was combined with our jet-lag as well. So it was quite an experience. Added to this, (back in Melbourne) I'd been doing our training around my working times, because I'd kept working. I was used to coming down at six o'clock in the morning and also paddling at five o'clock at night. Of course, the boat sheds in Tokyo weren't open at those times!”.

"How to get your boat to Tokyo the easy way"

After the 1960 Olympic games, the ruling on the C2 canoe specifications changed with the length of the boat increased to be the same length as a K2.

This immediately presented us with a major problem as we could not afford to buy a new boat from Europe or even get one built in Australia by a professional boat builder. The only solution was to build it ourselves!

The first obstacle was to get material light and strong enough for the boat. We finally found 1mm thick aircraft quality plywood. This turned-out to be WW2 surplus from Japan where it was used to build the Zero fighter-plane’s outside skin cover. Vid and I finally managed to build the boat, a bit “Jerry built” but was OK.  We used our boat to win the selection race for the 1964 Games. It certainly looked good after a few coats of varnish and was ready to “return to Japan”!

At this time I was working at National Instrument Company (NIC) which was part of the  Ansett Aeroplane group of companies.

To my surprise they offered to buy us a boat from Europe and have it delivered direct to Tokyo. This was a fantastic news, but it was nearing the time for the kayaks and canoes to be loaded onto the ship for transport to Sagamiko, Tokyo. I went to the Manager at NIC and asked him about our canoe. He said; “Not to worry, the canoe will be in Japan by the time you arrive”. I pointed out that all the Olympic boats will be loaded onto the ship and if our boat was not loaded and the boat NIC promised us from Europe did not arrive in time, we will be without a canoe! I was reassured that as Ansett was also an airfreight company, all would be fine.

So, the ship left without our canoe, which suited Vid and I as we could keep training in our canoe.  Some time later I got a phone call from the Manager asking to meet as he bad news for me. I froze. He said; ”I am so sorry, NIC can’t get the new  boat from Europe. However, I will organise that your boat  will get to Tokyo in time. Bring the boat to Essendon Airport where they will build a crate and fly it up to Brisbane and put it on a ship to get to Tokyo on time”.

“Easy-peasy. Nothing to worry about”. What else can possibly can go wrong?

A few days later I get a phone call from the airport;” Mr Wasmer, we have a problem, we can’t get the crate into the aeroplane as it is too long and wide. We may be able to solve the problem and we will ring you back soon”. Great!

Thankfully I later got a phone-call stating that they will bring a Globemaster plane down from Sydney (The front of this aeroplane opens-up so you can drive a truck into its belly) and it will be flown to Brisbane.

Reassuringly, the next day I got yet another phone call from the airport telling me the crate is “in the air on its way to Brisbane”. Finally, all is well.

The saga continued…………..two days go past and then I get a phone call; “Mr Wasmer, the Brisbane port facility here, we had a accident with your crate when the fork lift driver accidently ran the fork through the crate”. He offered to unpack the boat and make repairs but we would miss the last boat to Tokyo so I told him to simply fix the crate and we will repair the boat in Sagamiko. Hooray, the next day I was informed that the ship left Brisbane with our box on board.

Mistakenly, I thought nothing can go wrong from here on. We duly arrived in Tokyo and the bus took us to Sagamiko where there was a magnificent club house and boat shed. After settling in, we went down to the boatshed. Each bay was nominated to a country with all the boats installed on racks. In the Australian section all the boats were there, but, then I saw an empty rack and realised that “our C2 canoe was missing!”

The Olympic office knew nothing of our missing C2. The next day we were at the club house when I heard a siren blaring and then a police car with flashing lights roared in with a truck behind carrying our crate!

Luckily the damage was easily fixed as the fork went between the ribs.

Whilst we did not excel at the Games, I don’t think that any other competitors made they own boat and paddles!

Finally, “How to get to the Closing Ceremony in style”

We were in the main Olympic village, and I missed the bus taking the athletes to the closing ceremony. I raced out to the gate, but the buses had already departed.  I didn’t know what to do. There, standing at the gate, was a lonely policeman, so I raced up to him and tried to explain that I had to get to the stadium.

He beckoned to a police car parked the opposite side of the road and after a quick discussion, he opened the door and gestured that I get in. In I hopped, and we took off with blaring sirens! We got to the stadium in no time at all.

I thanked them and did not know what I could give them in return for their help. I only had several Australian coins in my pocket, so I give each a 20-cent piece (Ed.probably a florin- two shillings - as cents arrived in 1966) as a souvenir from Australia and said “Sayonara”. 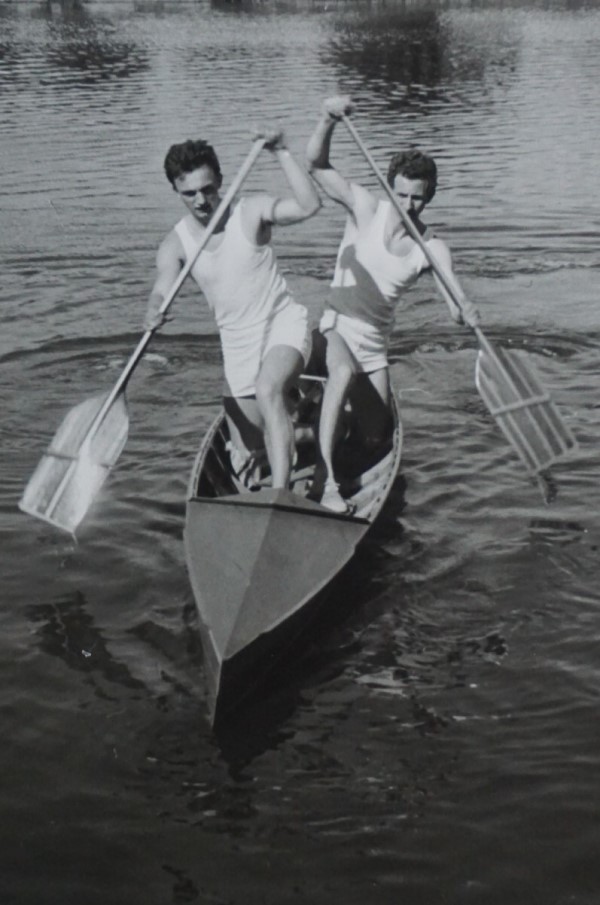 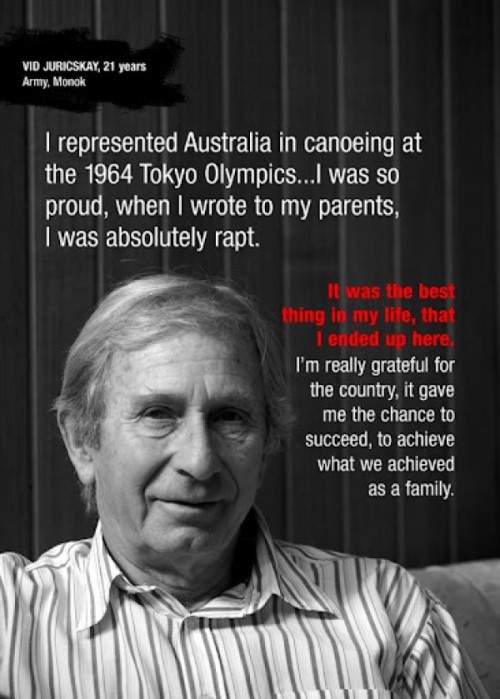 In addition, Adrian Powell, at that time INCC & previously FCC, was a finalist in K2-1000m