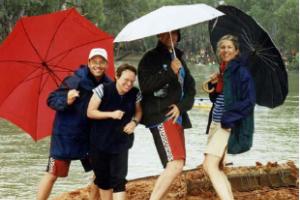 With the Murray Marathon fast approaching we begin a series of articles focussing on the "Murray" This article originally appeared in the club newsletter in April 2003.

They called Copernicus crazy because he proclaimed the world to be round and they locked him up when he said that the earth was not the centre of the Universe. One wonders what they might have done to him if he had of decided to landcrew for a women’s K4!

Well those of us that did landcrew for the Job - Watch Coxless 4 Murray Marathon team were not thrown in jail (on that occasion) but there were many times during those gruelling five days that we thought we were CRAZY for volunteering for the job.

Now you may be asking yourself, how many people does it take to landcrew for a women’s K4. Well we rather foolishly thought one landcrew for each paddler should suffice and Simmy, Gary, Debbie and Kaos were recruited for the job with the fabulous Helen recruited as chief hugger and photographer. BUT the first time we had to lift that K4 off the trailer we knew we would need more help. I mean lifting this K4 (which incidentally was the first built in Australia in the 60’s!?! and weighs somewhere in the vicinity of a tonne) was a feat that rivalled those of the ancient Egyptians and their pyramids – gees at least they had slaves. Although human slavery was banned a few centuries ago, we defied accepted practice and enlisted a few slaves of our own in the likes of Ritchie, Miss Jane, Julie, Liz and any hapless soul that happened to pass within spitting distance of the boat.

Aside from carrying around the bloody barge as it was rather unaffectionately known, let me tell you about some of the other trials of landcrewing for a women’s K4 team. There were the gazillion jam sandwiches and 36 litres of Gatorade that one had to prepare on a daily basis, the long dusty day two and all its antics of bush fires and 40 degree heat, the erection of eight tents in gale force winds on your own while trying to not spill the beer in your free hand, the mud and slush of the last day and the wraith of the hungry, exhausted paddler who just wanted to get out of that damn boat. And of course folks, there is always the torment of the landcrew uniform - white T-shirts that were regularly wet? At least the school-boys were happy!

But my friends, all these trials and tribulations paled in comparison to the one task that we landcrew could never forget, the task that would strike fear into the hearts of the most hardened of landcrew and I understand is illegal in some European countries – the task of cleaning the boat at the end of the day. Now I do not wish to elaborate for fear that reliving the horror may counteract the excellent progress I have made in all my counselling since the Murray, but let me just say that we didn’t call our paddlers the piddlers for nothing! But perhaps I give the impression that we landcrew did not enjoy our time. To the contrary, we all had an amazing adventure that we will not easily forget.

The excitement and pride we all shared when our amazing girls came around the last sweeping bend and flew across the finish line in record time, the poems and songs, the rather silly and pointless discussions on cow tipping, the sexy shorts and the companionship of other landcrew made the experience truly exceptional. If you get the opportunity to landcrew then take it but also take a peg and a strong constitution, and have your therapist’s number on speed dial for use after cleaning the boat! K4 land crew cope with drenching rain and mud