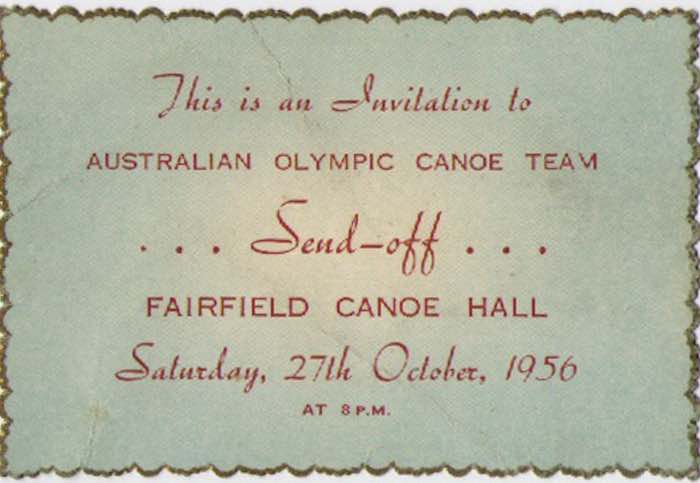 1956 Olympics and their Impact on Fairfield Canoe Club

Awarding the 1956 Olympic Games to Melbourne had an immediate effect on the sport of canoeing in Australia. For the first time, we would enter a team in the Games – even though paddling events had been introduced in 1936. Of greater interest was the arrival of the kayak events. This craft had not been seen much in Australia, but in the 12 months prior to the Games many kayaks were imported and built. Surf skiers from the northern states were successfully applying their paddling skills to flatwater kayaking.

Fairfield Canoe Club became actively involved in the build-up to the Games. Tom Ohman won selection for the C2 1000m and 10,000m events, which were held on Lake Wendouree, Ballarat. Several other club members were selected as reserve paddlers, while a few more were selected as officials. The Club also went to great expense to purchase an Olympic canoe for £150, and committee minutes record arguments surfacing as to whom within the Club had permission to paddle this special canoe.

Not only did we discover kayaks and gain Olympic representation, but we also learned about the Hungarian Revolution, which occurred just a month prior to the 1956 Olympic Games. This had a significant impact on both Fairfield Canoe Club and paddling state-wide. Due to the civil uprising in Hungary, a number of Olympians defected from their team – Zoltan ‘Zoli’ Szigeti being one of them. Zoli, a world champion kayaker, found his way to FCC, and a significant number of his compatriots followed, with an immediate impact on the talent and competitive paddling ethos at the Club. A number of other of new Australians joined the club as a result. This injection of European paddlers certainly raised the profile of Fairfield Canoe Club.