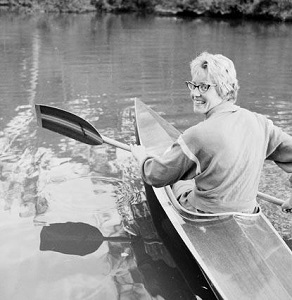 History Snippet – “Elke Sager - a FCC Champion” Elke Sager appeared in our “Tokyo Olympics – a Paddler Report” where she was included in a photo alongside our FCC representatives – Marg Buck, Vid Juricskay & Fred Wasmer. As you will discover in this snippet, Elke was so very nearly a member of this team as well.

Elke and her sister Heide were born in Germany, living in Hamburg. In 1953 the family migrated to Australia where they settled in Rosanna. This led to them going to Ballarat for the ’56 Olympic Games canoeing events to watch a friend of their father who was in the German team. The Sager girls clearly ‘caught the bug’; “After seeing the team, Heidi and I made up our minds to take up canoeing. One day we saw a sign to the Fairfield Canoe Club, so we both joined it”, and the rest is history. They quickly came under the wing of Zoli Szigeti and his elite “Silly Club” with Heide representing Australia in the K1 & K2 500m at the 1960 Rome Olympics. 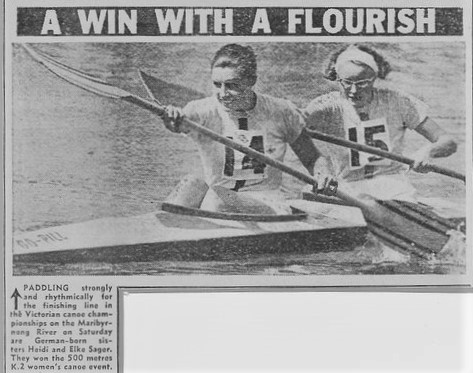 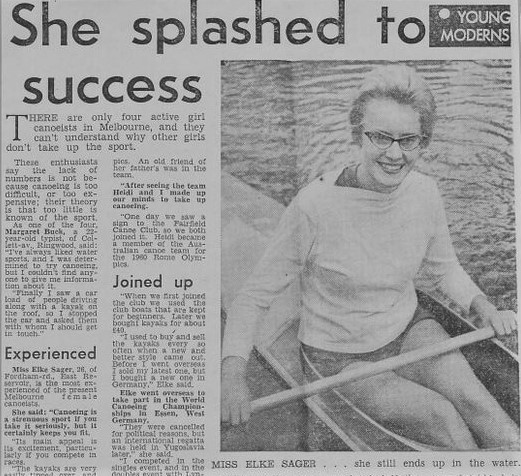 Like Heidi, Elke flourished and in 1962 she went overseas representing Australia in the World Canoeing championships in Essen, West Germany. She relates; “They were cancelled for political reasons, but an international regatta was held in Yugoslavia later. I competed in the singles event and in the doubles event with Lyn Wagg from Sydney, but we were unplaced. We won the doubles title in 1962 and 1963 at the Serpentine Regatta (London) in England”. As reported in SPORT, October 1962: “Trembling with joy and utter surprise two pretty Australian girls came off the water…. after winning the K2 event for women….they had competed against some of the top European canoe teams, including the West Germans and Italians who won every event last year”. 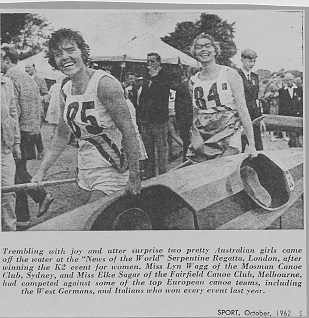 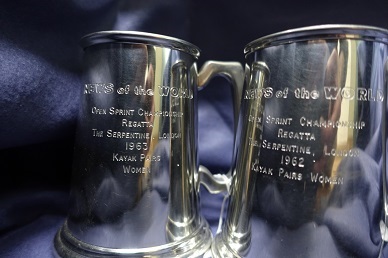 Elke spent 18 months in Europe where she trained under one of Germany’s top coaches, Werner Boehle, and competed in numerous canoeing competitions, the Serpentine Regatta triumphs included. As well gaining paddling skills, Elke also met Helmut Reitmuller who later followed her to Australia where they married. Needless to say, Helmut joined FCC too and paddled many events paired with Jonathan Mayne.
When Elke returned to Australia in 1963 she continued to train with realistic aspirations of making the Tokyo team. However, as there was no funding and no AIS in this era, Elke remained in Melbourne whilst her K2 partner from the Serpentine, Lyn Wagg, returned to train in Sydney. As reported in the Australian Women’s Weekly,13 May 1964: ”Lyn and Elke were regarded as certainties for Tokyo until Elke announced, after their arrival back in Australia last year, that she would pair with a fellow Victorian. Elke’s move proved fatal for her Olympic hopes, but it helped Norma Howard”.

Her “fellow Victorian” was the young Marg Buck. Marg relates: “Then Elke and I teamed up in doubles for the Tokyo trials. I won the singles, which was the selection race (K1 500m), and we were doing doubles. Sadly Lyn Wagg and Norma Howard won the doubles. Now, Elke won everything else. There were four more events she won, the K1 1000m, K1 5000m and we won the K2 1000m & K2 5000m. So she was a great paddler. It was a great pity we missed out” (Only the 500m races were Olympic events).

Marg goes on to explain another twist to this story: “Norma Howard ended up with a sore shoulder before we went overseas to the Olympics and Lyn could see that she wouldn't be paddling. However, Norma attended the Olympics but was “found to be medically unfit but she couldn't paddle because her shoulder didn't improve. So, I (Marg Buck) became the doubles partner”. Marg had never trained with Lyn Wagg in a double prior to arriving on the water in Tokyo, in spite of having trained with her in Wollongong where they had “both concentrated on our singles and never went near a double”.

There are two more pieces to this interesting jigsaw. The first is that Ingrid “Atom Baby” Pich (https://fairfieldcanoeclub.org.au/Ingrid) discovered paddling in here teens as the two daughters of her parents’ friends, the Sagers, were Elke & Heidi. The Sager sisters were already paddling so Ingrid said she too “wanted to come down and have a go” and duly joined Zoli’s “Silly Club” of champions as well.

The other connection surfaced at our 2013 Legends Lunch was that Fred Jordan (Essendon CC) mentioned that he emigrated from Germany along with Elke and Heidi who used to live on his street in Germany. Their families (unbeknown to each other) planned to emigrate and found one another on the same ship during the trip out to Australia. Fred is a good friend of FCC, as he painted much of the high interior of the FCC clubhouse and, as a professional painter & decorator, served as a great role model for young Michael Loftus-Hills who painted the lower sections.

Elke was clearly one of our club’s great paddlers, having held international event titles, Australian titles and numerous Victorian titles.