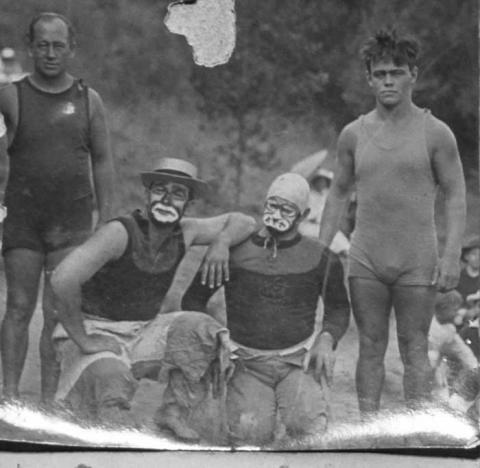 The FCC Minutes Book for 1921 details the many motions, both won and lost, taken to organise their carnival. It was no small event and one that required much aforethought.

Planning appears to start Feb 22 when it was determined “to make a request to Heidelberg Council for permission to hold a Carnival in Fairfield Park”. No date is mooted. In addition, it was decided to approach the Heidelberg District Band (HDB) asking that they play at the event. Clearly HDB were unable to attend so the South Melbourne Band accepted the challenge to play at Fairfield Park and, in addition,  were also asked to “march from Clifton Hill”, which is over 2 km !

This Carnival was not a sporting event as we know it today. Yes, there were the canoe races:- Open singles, Championship Pairs, Novice Pairs and Novice Fours, each with an award where it was determined “that the Club is not to give any money prizes” but instead “the winners get a trophy valued at one Guinea with the winner having their photo taken at the Club’s expense”.

What of these extra events? Confetti Battle, with “Miss Wrenappointed to organise a committee to cut-up paper for the confetti battle”.

It seems that this is a land-based activity (https://en.wikipedia.org/wiki/Confetti) to mark the end of the Carnival as noted in this description of a Geelong Beach Carnival in 1926. “ Last Day of Carnival – Confetti Battle Tonight (clearly a drawcard event) -….large stocks of confetti have been ordered, so that when the confetti battle takes place there will be an ample supply of ‘ammunition’ for youths and maidens to mark the closing scenes of the carnival”

- Best comic canoeist of the day

Modern day electrical extras were planned too, in the form of “electric decorations” and “to obtain telephone communication between starters and judges”. No comment made as to whether either item was installed. How times have changed?

Most important of all were the lengths to which the Club went to advertise this event to the local community. Presumably there was money to be made from attendees, so, the more the merrier for club coffers.

“..3000 dodgers to be printed advertising the Carnival”

“ ….advertise (the Carnival) at the Northcote, Fairfield, Ivanhoe and Lyric Picture theatres”

“ ...obtain a lorry to advertise our Carnival on the Friday night before”

Interestingly there is no date recorded for this event  in the Minutes, but I have discovered a mention in The Age, March 15, 1921, that “ The Fairfield Canoe Club held its second annual carnival at Fairfield Park on Saturday (12th March). The pairs canoe championship, which was run under the rules of the Victorian Amateur Canoe Association, created much excitement. The final resulted in a win for Fairfield Canoe Club (W.Roach and M.Clay) by three-quarters of a length from Twickenham Canoe Club.”. However, it is minuted that “profit gained by the last Carnival be put into the Building Fund”. This Club building was not commenced until 1925, some four years later.

1925 – Turning the first sod for the FCC club house at the Esplanade, Saturday 13th June.