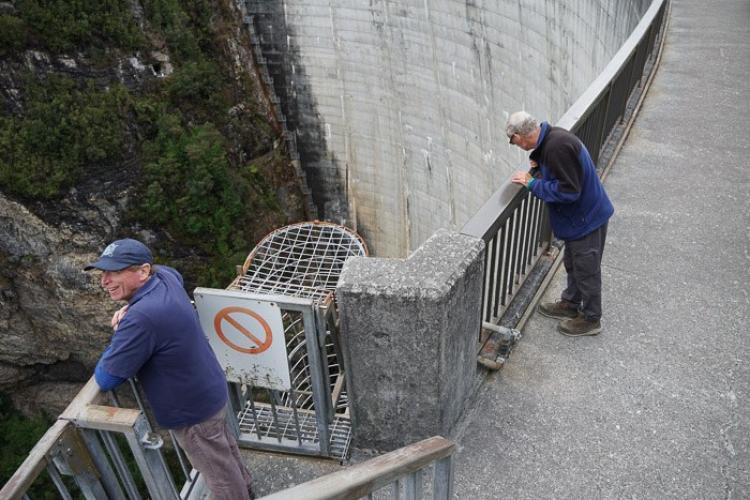 Three intrepid FCC paddlers (Tony Payne, Michael Loftus-Hills & Mick Kane) recently reported on their paddling exploits on a wind and rain-swept Lake Pedder. However, they were not the first, nearly 100 years ago, and long before Lake Pedder was flooded for the Upper Gordon hydro electricity scheme in 1972, two of our club members undertook an epic adventure in very different times. Read on……….

It was announced in “Water Sports” by Harry De La Rue in February 1926 that:” Members (FCC) are now talking of their Christmas holidays and where they are going. Two canoes will leave Victoria for Tasmania, that little island down South: one is going to explore over sixty miles up the Gordon River and we hope to secure some splendid photos and news of the trip, which will be kept for future organised trips.”

This is the proposed agenda and costing submitted to the FCC Committee, unfortunately it is not dated so we do not know when or whether this proposed trip was actually made.

Photo top: Mick and Tony at the Gordon River dam. 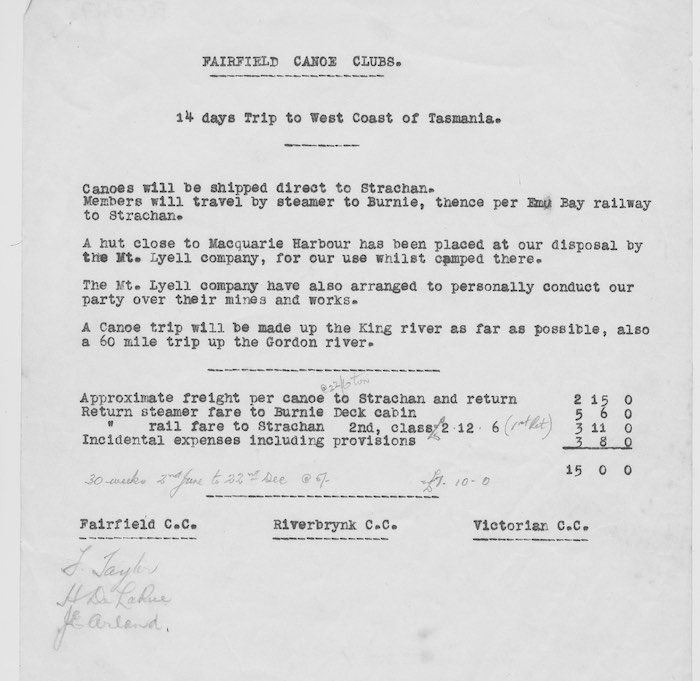 However, what is clear from our records (undated as they are), two club members did explore the South-West Tasmanian waters as recorded in their report. The paddling duo is not identified but the writing has the hallmarks of Harry De La Rue. His name is also pencilled-in on the costing above. Clearly, they had hopes of fellow paddlers from the Riverbrynk and Victorian Canoe Clubs would be joining a trip South too.

TRIP UP THE GORDON RIVER IN A CANOE

“We, my mate and I, left Burnie Tasmania with light hearts and heavy kits and a keen interest in a trip we had planned to do from Strahan, West Coast to Tasmania, to the Gordon River, and as far up this as our time would allow. Boarding the Emu Bay Railway at Burnie early one morning, we proceeded to climb and wind our way into mountainous and heavily timbered country, across narrow bridges and past tiny villages, some of which had been former mining towns, now totally deserted, to the once prosperous town of Zeehan. From there we travelled on more rapidly down into flatter country, which gave us an opportunity of seeing and admiring Tasmania's numerous and beautiful wildflowers. On arrival at Strahan, we gave our canoe which had been shipped from Melbourne direct a tryout and were pleased to find it in splendid condition and fit for the start of our trip on the morrow.

Having provided ourselves with sufficient provisions for our eight-day camp, a change of clothing in case of accidents, cushions, blankets, waterproof cover, the usual “Billy's” and a few other necessary oddments. We loaded up ready for early start at 5:30am on a twenty-one-mile trip down the harbour to the mouth of the Gordon. Before leaving, we were warned by various fishermen and other inhabitants of Strahan, that Macquarie Harbour was very treacherous on account of sudden changes of wind, which came on one without any warning, and that they feared for our safety; still provided with a map and hoping for the best, we started out. Although it was drizzling with rain and heavy mist was blocking our view of the coast, the water was as calm as any pond. Our first landing was at Yellow Bluff seven miles away, which we reached without any trouble. Here we had breakfast and spent the rest of the morning, drying out gear in front of a huge fire as it had now cleared up and the afternoon in cruising about, and going to Swan Basin, three miles away for fresh water. We decided on camping the night here and making another early start next morning when the wind had dropped and the water was again calm.

Made a successful crossing of the channel, four miles, a long hard pull against headwind and current, not far in from the entrance to the harbour, the notorious Hells Gates, scene of numerous wrecks, finally camping for lunch at Double Cove, a beautiful little cove with virgin forests coming right down to a dazzling white gravel beach, where we obtained fresh water from a beautiful cool crystal creek. Then on again to the Gordon River, touching Settlement Island, which we explored for fresh water. The day being hot and going fairly stiff, still facing a headwind. Fortunately for us, as we set out on the last stage of our journey to the mouth of the river, the wind changed following us directly behind all the way. This made going easier, although we had heavy following seas coming down the full stretch of the harbour and the swell where sea met river was very heavy, making us more cautious, but the canoe rose to it like a bird. Our first landing was some four miles up the river at an old logger’s camp, then onward again looking anxiously about for a decent night camp as up to now the thick forest country came right down to the water's edge, allowing for no landing whatsoever. Fresh water could now be found in plenty, as the hills on either side gave way for many creeks, the water of these creeks was clear as crystal, and icy cold, for which we were thankful. The river water, although good to drink, was a brown colour, and not altogether inviting. About seven miles further on we struck the remains of another hut, and a good landing place, here was our camp for another night. Paddling in the river was easy, as the current is slow, in some places “still water”, and so deep that the reflections thrown by the surrounding hills were a wonder to behold.

Next day, and the next, going was much the same with our pleasure and wonderment growing at every turn as the hills became a higher on either side and reflections more perfect.

The only thing marr,ing our keen enjoyment and bodies were mosquitoes and sandflies which were in abundance. We slept in the canoe tied well out in the stream to avoid them and after smoking, endless cigarettes as a warning to “keep-off”, slept soundly to wake up and find we had been bitten without mercy while we slept.

On again and as we got further up the river, the forest appeared even thicker than before. Here we found large lumber camps working, and tied into rafts and floating in the river, where hundreds of logs of Huon pine and other timber. These remain to be picked up by tug and towed to Strahan.

We were now nearing the Sir John Dodd Falls, from directions received they were still some distance off yet. We could distinctly hear the roar of falling water. Butler Island was next seen ahead of us, right in the centre of the river. On closer view, a man's head could be made out in the rock formation in the foreground. This island is quite small and no possibility of landing. The falls were reached at last, and a very pretty sight too, tumbling down over sheer rock into a kind of basin hemmed in by more rock and huge tree ferns.

We left here hoping to strike a suitable camp spot and after paddling up the “Franklin” a tributary of the Gordon some distance in vain, returned and continued up to Gordon for some miles, crossing three smaller rapids before a pebbly beach of moderate size came into view. On landing we discovered higher up, and hidden among the trees, an old timber camp in ruins and partly overgrown, still, the beach looked a promising site for boiling the “Billy” for a well-earned cup of tea.

This was our last camp as time was going, and we had the return journey to make, so stayed on till the following afternoon, lazily enjoying the surrounding beauties and wildlife. Besides other things of interest worth to mention were the wild duck, one could paddle up to within touching distance before they would fly away.

Black Swans, many kinds of parrots and cockatoos, black divers who live chiefly on fish, 15 pounds of fish per day is simple fare for these gluttons. Lucky for them the Gordon is teeming with fish of all kinds. Sitting quietly by the water's edge at evening, they can be plainly seen feeding jumping out of the water after some extra sweet “tit bit”.

Our homeward journey was very similar, as we made the same camps doing the same hours of paddling per day, reaching Strahan about 5.30 one evening, where most of the town gathered to “Welcome” us here and hear our many experiences. Except for being horribly sunburned and rather saw in spots, we felt that our trip had been a great success, covering, in all, just on 100 miles by canoe alone.”

Signed -off: The Pioneer Canoe Trip

Clearly this trip was not quite as proposed in the ‘costings proposal’ above, but still quite an epic for two paddlers in their canoe, all the way from Fairfield!