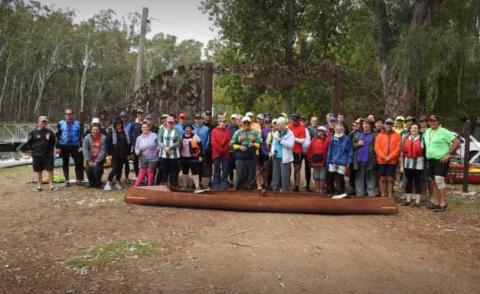 A significant "single class" race was held on Saturday 14 April 2018, from Picnic Point to Barmah on the Murray - the Great Toro Race.  Andy Toro, who designed the boat, together with Jane his wife, flew in from California last week as guest of honour.   Jane and Andy, despite jet lag and paddling in the oldest Toro of the lot (the original one!) proved to be formidable paddlers, only just behind FCC's "gun" team, Alex James and Trevor Archibald, who came 3rd overall.  FCC's other "gun" team (Payne/Routley) tried to swim a significant portion of the race which was great for limiting body temperature but not so great for overall race times.

On the Sunday after the race, Andy showed why he was an Olympic coach for so long - his teaching and analysis of canoeing was superb.  Watch this space for tips from Andy!  And watch the water for improving canoeists following Andy's instruction ..

The Great Toro Race was fun, well run and fast down the Murray.  The weather was, pretty much, awful, with horizontal rain, howling wind and trees falling down in the background.  But we had a hoot. If you don't know much about canoeing - then learn, and join us in next year's GTR!

Background on the Toro race - from the Australian Canoe Racing fb page (thanks to Steve Dawson)
Once upon a time (1971) an American called Andy Toro built a canoe to race in Australia’s 404km 5 day Murray Marathon. He made it in pieces so that he could carry it on the plane. He raced in a strange country with strange people who wore cotton pyjamas while they raced, drank Fosters, and ate steak after the race (when all Andy wanted was some water)

Long story short, Andy won and returned to the US leaving the canoe that he built behind.
As is often the way with boats that win races, everybody wanted one and soon there were many many Toros racing the rivers of Australia. So many that 47 years later, we can still put a race together where everybody is paddling a Toro. And so it it with the Great Toro Race, organised by Mad Mick Dinkgreve.
This year Andy returned to Australia with his wife Jane to race in the event that bears his name.
The race covers the first 26km section of the Murray Marathons Day 3 from Picnic Point to the checkpoint stop at Barmah Bridge and runs through the Narrows, a winding section of river with fallen trees the force you to zigzag down the course.
Kate and I raced in a borrowed boat, from a running start at the back of the grid. We came third in the mixed class behind some excellent competition.

There were some huge laughs, a few spills, some shenanigans and maybe the odd conniption.
We are now wondering whether we should get one of these Toros so we can improve our time in next years race...