History Snippet - "A Visit to Meet the Princess" 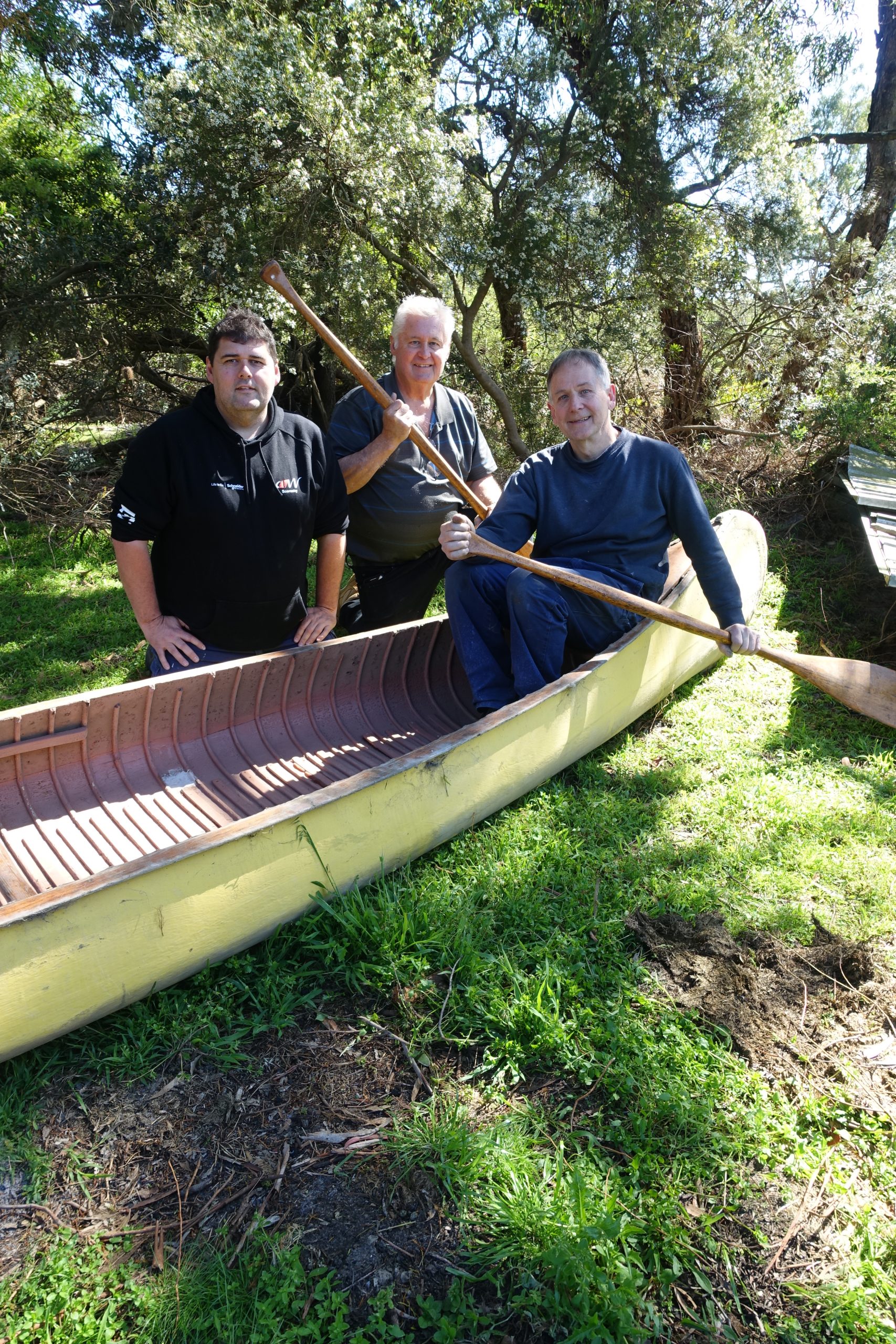 Several weeks ago, Tony Payne and I travelled to the Mornington Peninsula to meet “Princess”. So what, you might ask? In fact, this was a multi-generational trip across our club’s history, that starts with our iconic ‘origin photograph’ hanging in the clubhouse. 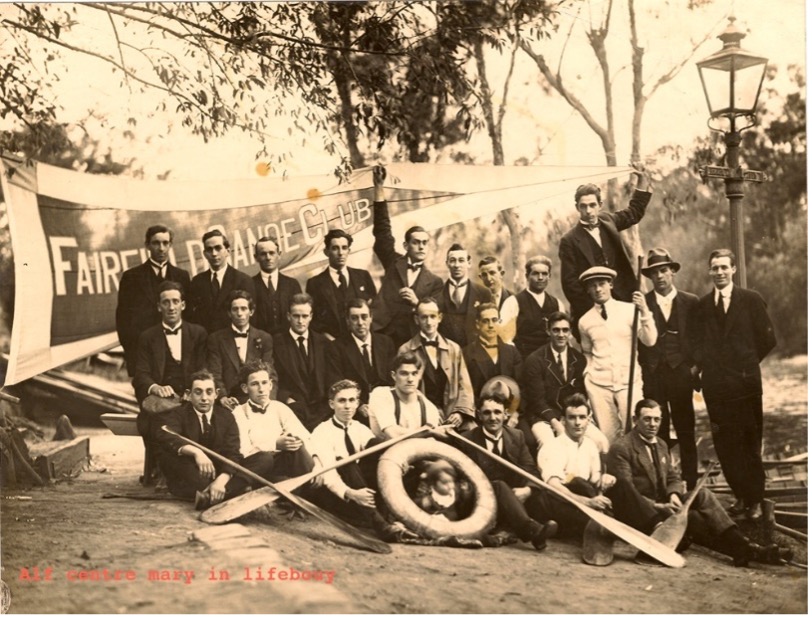 Alf Lucke was an important founding member of our club, seen here seated centrally behind the lifebuoy. In front of him is a small girl who is his second daughter, Mary. It was Mary’s sons Doug & Chris McClelland that we visited.

Not only was their grandfather Alf a champion paddler, but he was also a leading builder of canoes. The one-time FCC member and documenter of Victorian canoe history, Arthur Howard, writes that in 1919: "The V A C A organised races between the clubs on the rivers near or where the club houses were situated, they all raced in their touring canoes with the exception of the V C C (Victorian Canoe Club based at Burn’s Boathouse, now known as the Studley Park Boathouse) as this club could afford to have slim racing canoes built for them by the Lucke brothers. Having the faster canoes, the V C C became the top club in canoe racing, but not for long, within 3 months of joining along with the V A C A they withdrew due to personalities and classification of racing canoes.  In protest to the way the V C C carried on over the canoe situation, Alf and Gus Lucke joined the struggling Fairfield C C at Fairfield Park and started building racing 18 ft Canadian canoes for them on time payment, this allowed F C C to become top club”. 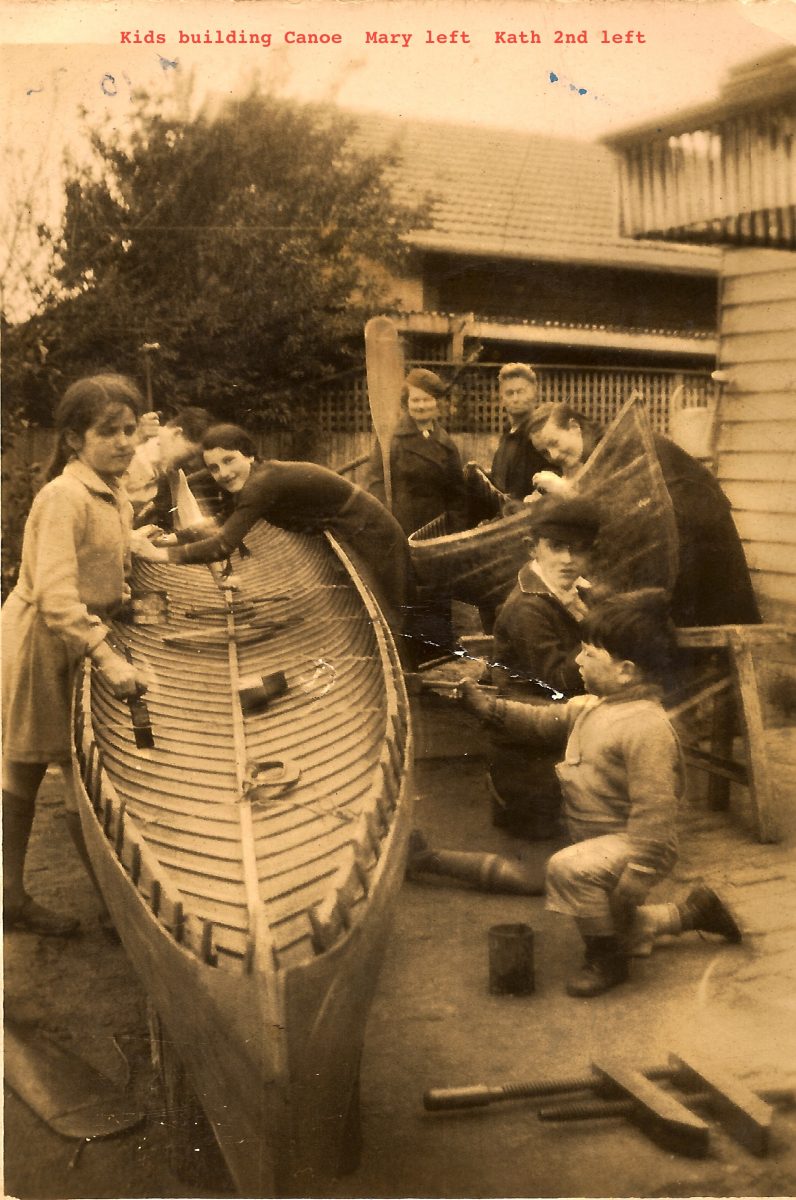 As shown in this photo, Alf ensured that his two daughters, Kathleen and Mary, each made their own boats – “Spring “(painted green on the bottom & yellow on top) and “Autumn“ (painted an orange/red). We have a photo of Doug, his father Jack and mother, Mary (nee Lucke), all together in “Spring”. 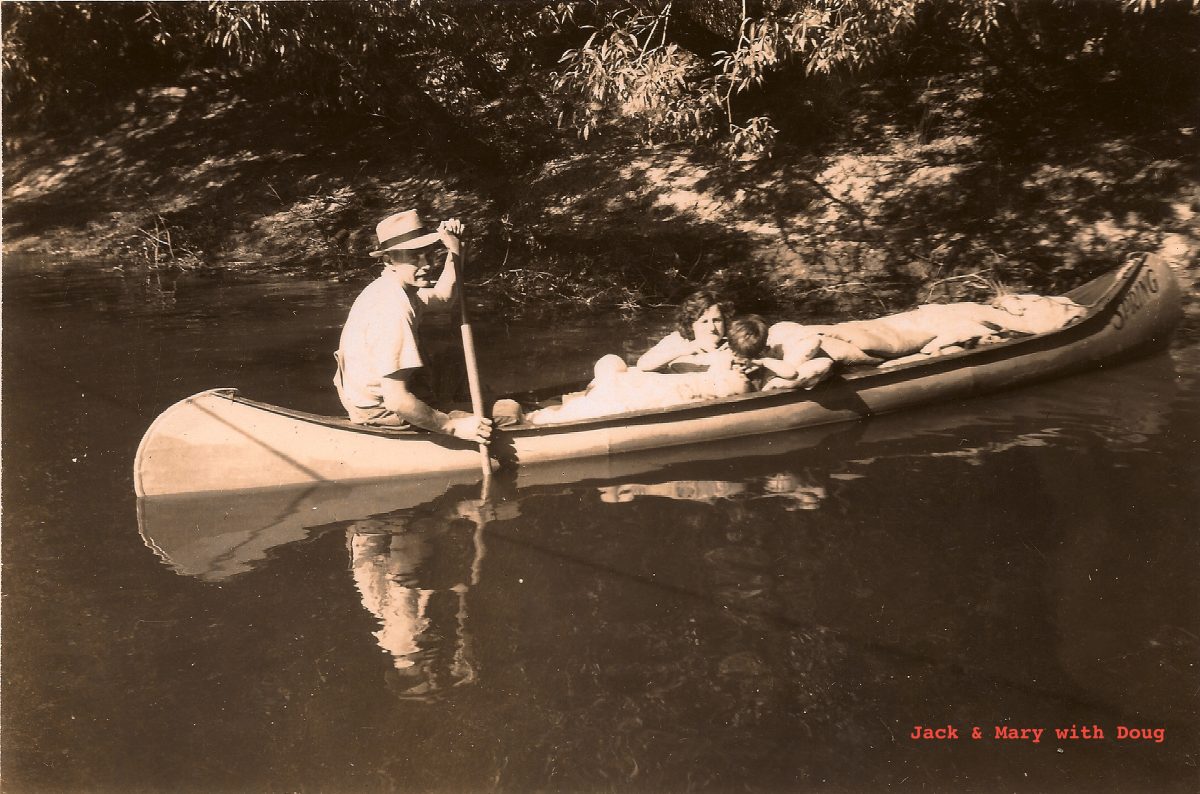 Whilst “Spring” was lost, “stolen”, when the family lived in Wagga, “Princess” was safely stored in a shed at the Lucke family home in Kew. Doug does not know when “Princess” was constructed but was probably in the early 1930’s. As can be seen in both the old photos and our recent images of “Princess”, there is a framework which is covered with Oregon-timber planked sides which were then, originally, covered with canvas, size applied (size is a liquid made from various glutinous materials, such as preparations of glue, flour, varnish or resins, which was used for filling the pores in the canvas). This waterproofs and shrinks the canvas to make it a tight skin. Finally, the canoe is painted. Originally Princess was painted a mid-blue on the lower half and pink on the top. It was not a hard join but probably blended with a brush.

When “Princess” was discovered, one end of the boat was somewhat rotted. This section was repaired and as can be seen, some extra reinforcing struts added to the floor. The old canvas was removed, and a fibreglass skin applied. This was then painted yellow. The bow (above) shows the original struts without additional reinforcements.

After repair in 2011, “Princess” has had an outing on the Thompson River but for some years now the boat has been stored in a shed at Chris’s property and did not look quite paddle-ready at the time of our visit.

The approach to Chris’s place along a hidden bushy driveway was like taking a step back in time with many items of yesteryear on view: fire hydrants, post boxes, petrol bowsers, old signs, telephone box etc. There was even an old weatherboard cottage he had bought and furnished with memorabilia from the 1950’s or earlier. This prompted talk of our old clubhouse and noting that for a while in 1947 was used as a tether-car racetrack. Hamish asked Chris if he knew about “tether-car racing”. The rapid response was “Do you want to see a tether-car? I am in the process of rebuilding one!” Read more here and here as well.

It is lovely to think that “Princess” was built in our club’s earliest days and lives-on ninety years later, clearly treasured by two of Alf Lucke’s grandsons, Doug & Chris, & a great-grandson, Stuart, who were all there to greet us.

Four generations of Lucke – (L to R) “Princess” from the hands of Alf, Stuart, Doug & Chris.

The club has just taken into their safekeeping the original Title Deeds for our block of land in 1926. This reveals that Alf Otto LUCKE was an original signatory on this document.