Fairfield Canoe Club was established in 1919 on the banks of the Yarra River, downstream from the present clubhouse. FCC is one of the oldest canoe clubs in Australia and has a rich and varied history. 2019 was our Centenary year and we are publishing "history snippets", as part of the ongoing club history project.

As part of the Centenary celebrations, held in 2019, over 100 photographs were on display at FCC. We have put most of photographs on our photo gallery. You can also see a written summary of the key periods in the club history - see the drop down menu under the history tab. Each of these summary pages list previous issues of the club newsletter.

Contact Hamish Ewing if you would like to be involved in the history project or you have a history snippet that you would like to share with the club. Photographs, memories, articles, or objects, are all welcome. 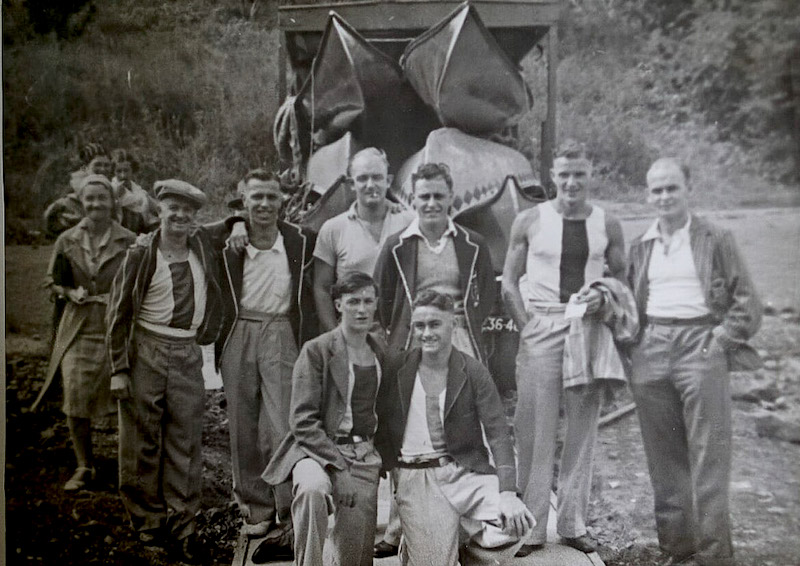 How did the Fairfield Canoe Club evolve?

Arthur Howard writes: “It seems that the war eased the class barriers as those that didn’t go to the war and the returned men got on very well together in this club (Boomerang Canoe Club), canoeing up river on picnics and to the “Ryver Brink Cafe” for meals and the popular Saturday Jazz nights, also canoe racing and novelty events that Edmund Cooke the Proprietor at Rudder Grange organized from time to time to entertain his cafe patrons.  These Boomerang Canoe Club men liked to have a drink and started to bring it down to Rudder Grange, it was one of Cooke’s policies that no alcoholic drinks be on the premises, he asked the club members to mend their ways or take their canoes and leave.  Fourteen decided to leave, packed their gear in to their canoes and paddled downstream to the Fairfield Park Boat House, known then as “Willow Dell”, where canoe storage was available.  Within weeks of leaving Rudder Grange they established a new club, the Fairfield Canoe Club on March 1919 this being their headquarters for several years.”

At “Willow Dell”, the FCC headquarters in Fairfield Park, they started interclub canoe racing and had their first canoe carnival, they also travelled to other clubs venues for club racing”.

In 1924, FCC purchased the riverfront block we still occupy today. A clubhouse was commenced in 1925 and completed three years later, built entirely by club members. This original building became very dilapidated and was demolished in 1981, to be replaced by the ‘A-frame’ building that you will all be familiar with today. This too, was largely constructed, slowly owing to cost constraints, by the club members.

Fairfield Canoe Club Today – (more than) One Hundred Years on

Should they paddle those 500 yards upstream from their first home at the Heidelberg Boathouse at Fairfield Park all those years ago, our founding paddlers of 1919 would be proud of what they would find at 9 The Esplanade, Alphington.

Fairfield Canoe Club has weathered numerous floods, World War 2, the Great Depression and a varying interest in the sport of canoeing/kayaking.  Nine club members were Olympians with many national and state champions amongst our membership too. Today we have a strong club of 300 members (34% female) all of whom are shareholders in an Incorporated Co-Operative that is financially stable and housed in a first-rate Clubhouse. A club that has members ranging from eight to eighty years, and many club boats for all to share. A club that provides opportunities to pursue the full gamut of paddling endeavours, both competitive and social.

Our club lives on into the 21stCentury!