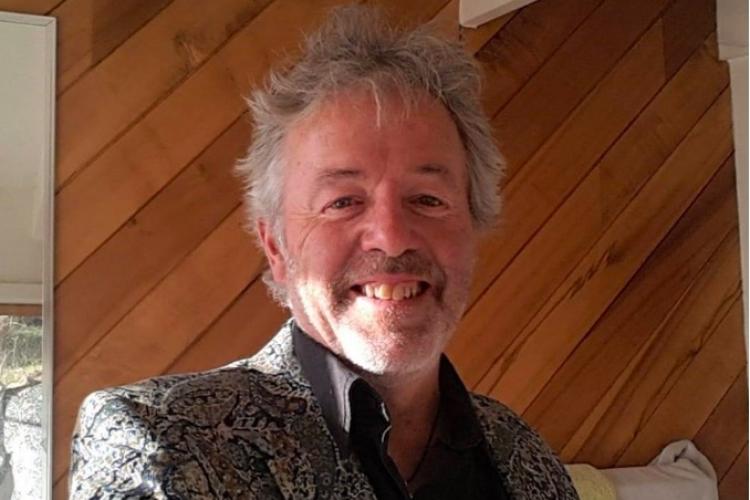 First is a tribute from his brother Bob and sister Margaret published on Paddle Vic website May 18, 2021.

We would like to let the paddling fraternity know that sadly our brother John, passed away on 31st March 2021, he was aged 62.

Flat water kayakers from the late 70’s and early 80’s from all over Australia would have known John as one of the fastest competitors over 500 and 1000 metre sprints in both K2 and K4 events.

John began his paddling career at Rosebud beach on the Mornington Peninsula. He and the rest of our family were members of the White Water Canoe Club. John’s first race was the Red Cross Murray River Canoe Marathon in 1974. The following year he paddled in the Murray marathon event again, but this time as part of a Patterson River Canoe team K4 in preparation for the upcoming sprint season.

Under the coaching of Robbie Millsom, he trained on the Patterson River, negotiating around people fishing from the banks and erratic speedboats. John found he had a natural ability to paddle fast with a distinctive smooth and efficient style. He and brother Bob achieved success at their first Australian Championships winning the junior K2 500m sprint in 1976. John went on to represent Australia at the 1977 Junior World Championships, teaming with Dennis Driscoll in the K2 500.

As a senior paddler he was selected in the Australian Team for the World Championships in 1979, a reserve for the 1980 Moscow Olympics and then World Championship teams in 1981, 1982 and 1983. John was team captain in 1981 Australian Team. His best international result was coming 5th in the K41000 at the World Kayak Championships in Tampere Finland in 1983. The following year John and Bob were selected for the Australian Olympic team to compete in Los Angeles. Together with Ray Martin and Scott Wooden in the K4 1000 event, the team finished a commendable 7th in the final. John continued competing in sprint racing until 1988. After an unsuccessful bid for the 1988 Olympic team John turned to dragon boat racing and competed in international dragon boat regattas in Hong Kong and Beijing. John retired from competitive paddling after 1988 and took up recreational white-water paddling, moving soon after to Tasmania, where he remained for the rest of his life.

However, there is more to this story of John Doak as he was also a member of our Fairfield Canoe Club prior to his selection in the 1984 Olympics. How did this come about and what was his significant contribution to our club and clubhouse completion? Read on……

Firstly, Foster Rosetto recollects that: “The reason that John Doak is there (on the FCC Honour Board), was that he and his brother Bob used to train from here with Adrian Powell. In order to train, they actually were boarding at my place in Bundoora, before Trish and I got married. So, I said to him, “Look, would you be interested in joining our club?” He said;” Iit’s a little bit unfair as I am paddling for "White Water" (in Rosebud).  The Rosebud Canoe Club was essentially the Doak Family and Willie Morris. They used to paddle surf for Point Leo too.

Initially he said “No” to my offer, but then Bob got his degree in teaching from La Trobe University and by 1980 John was looking for work. He was not a tradesman as such, but he was working here and there with Joe’s (Alia) factory, Nilsen Cromie. The Doak’s really appreciated the fact that we helped them out.

Then when we got the building up, I think the front had been painted, I said to the committee, "Look guys all the timber has to be stained etc. None of us have time anymore”. I then suggested that “I can get a very cheap labourer. John Doak is looking for work and I’m pretty sure if we keep John employed, he can still train for the Olympics, but he will also represent us” and that’s why he joined us. Bob did not as he had got a job as a teacher.

John stayed here (at FCC), and the amount of work that he did staining all the front, all the hack work. After we put up the building, he cut around all the steel posts and rubbed everything back and applied bitumen on it as concrete's got salt that attacks the steel. To be honest he did all that work by paying him cash, he was absolutely rapt

He and his brother always paddled doubles together and they were formidable, they just had the boat running so smoothly. If you see a film of them, it just 'worked'. “

In a K2, John was in the front. In the Olympic K4 he was  number 2. Bob was shorter but broad.

Bass Wakim has some special memories too as “He was a very dear friend of me and my wife Jenny. In fact, I think in early days he lived with her in a share-house with some other people, and he even stayed at our place sometimes, when he ran out of places to stay later.

I later went overseas with him in 1983 to Tampere, Finland. (See current History Board Exhibition)

John was a fun-loving type of guy who was always joking, laughing & trained hard. Like a few people in those days who were training for Olympics, they quit their jobs or did not really have a job and went on the dole as, at that time, The Australian Institute of Sport was not functioning well for canoeing. There was really nothing for canoeists. No proper coaches, no sports science, and no funding to support full-time training.  John was one of them, he did not really work when he was training, he just trained and rested.  I opted to keep my profession, I was an engineer, so I kept working and training, but a lot of the other athletes were training full time and not making any money, so it was tough going, in those days.

However, the good thing with John is that he did an apprenticeship in plumbing when he finished his canoeing and so became a plumber in Tasmania. In Tassie he married a lovely lady. We went to their wedding which a was very ‘alternative-type’ of an affair in a parkland setting. Unfortunately, she had cancer and died not long after they wed. John stayed-on in Tasmania”.