Joe Alia’s Introduction to Paddling, with thanks to “The Murray” (an instructive tale of tenacity) snippet 33 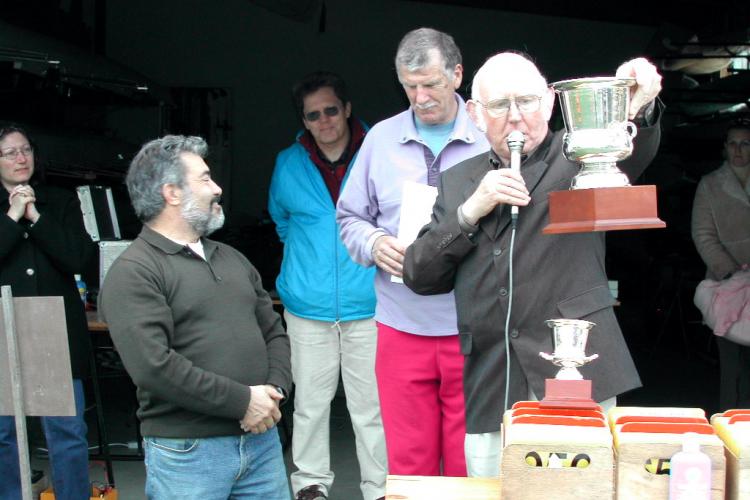 In 1970, young Joe Alia was working at Ericssons when he and some workmates learned of some Scouts rafting down the Murray. Needless to say, this sowed the seed of an idea amongst ‘the lads’ – “Let’s build a raft and float down the Murray next summer”. This they did, after-hours in the works yard. However, having completed their drift down the Murray, young Joe was unsatisfied with the result and, having observed canoes whilst up on the Murray, he decided to build a canoe with one of his friends, to tackle a new race over the Christmas–New Year period: “The Murray Marathon”. The original ‘Murray’ was held in 1969 and was not a formal competition; the first competition was held the following year.

So off they went to “Blocky-the-Boatbuilder” in Chapel Street, Prahran, to purchase a canoe kit to assemble at home.

This kit of pre-cut marine ply shapes was ‘stitched’ together with copper wire lengths that were passed through pre-drilled holes and twisted on the internal surface. Next, the now shaped hull was completed by running a strip of fibreglass over the wire externally, and when set, cutting the wire internally and running another strip of fibreglass over it. ‘Hey-presto’, a canoe. (see photos courtesy of Dr I. Ross) The kit did not include paddles, so Joe and friend bought two oars, as they were not aware of T-bar paddles.

As Joe recalls, “We put it together, gave it a coat of paint.  Took it out on Albert Park Lake, just to try it out. Had the worst experience ever. We thought we will never finish this as it did not have seats, didn't have anything. Anyway we went up to the Murray”. Reassuringly, before the Murray, they had resolved the seat problem!

So off to the Murray they went. “We'd had about three sessions in the boat before we fronted up on the Murray. It was the hardest thing I'd ever done that first day, in fact we didn't finish the first day. We continued, and I think we eventually did them all. After that it took us a long time to recover.”

Obviously we couldn't build the shape of the hull, there was a guy up the road in Clifton Hill, forgotten his name (Bob Pierce, he was a friend of Rim and was an ex Government aircraft factory worker who was one of the first people in the country to play with fibre glass. We will learn more of Rim Švambarys in an upcoming snippet).He used to sell you know hulls, and then you'd put your own deck on it. So this is what we did. We rigged it out and we went in that and that was a little, a little bit better.

Up until this time Joe and his friend were self-taught and in a moment of great insight determined that if it was to be attempted again...“OK if we're going to do it we need to do it properly”.

By this stage he had caught-up with his primary school friend, Foster Rosetto, who had initially acted as support crew for Joe and then became enthused with idea of paddling himself and joined with Rim. Rim was not only a great canoeist but also a member of the Fairfield Canoe Club, so in 1974, “Let’s go down to Fairfield” and we joined the club then. The whole purpose of joining the club was that we would get some training. We joined it, meeting Zoli”.

So, as they say, “the rest is history” with both Joe and Foster, the school-friends of yesteryear, becoming legends of the club, competing and coaching on the water and still serving on Club Committees.