Six days on and off Lake Pedder. 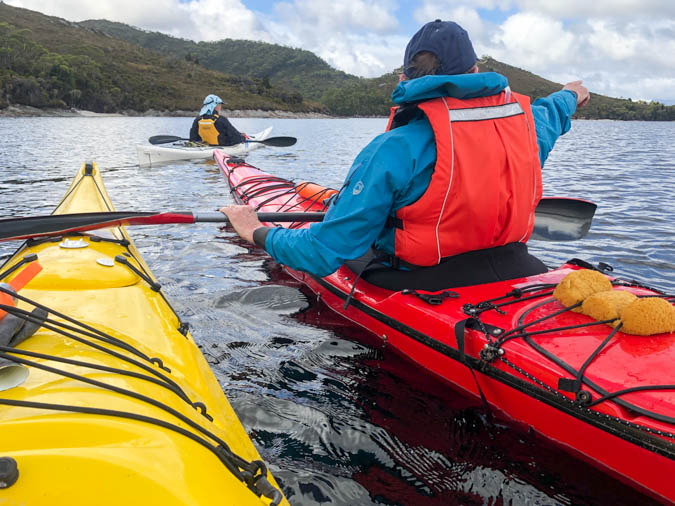 Southwest Tasmania receives more than 2 metres of rain per year. And as we huddled in the picnic shelter at Teds Beach, it seemed that most of that rain fell at Lake Pedder in late March. The three of us (Mick Kane, Tony Payne and Michael Loftus-Hills) had planned to spend six days touring Lake Pedder in sea kayaks, camping in a different location each night. The tail end of two weather fronts colliding on the east coast of Australia changed our plans. On arrival at Lake Pedder we were greeted by drenching rain and gusting winds which, to put it mildly, challenged our paddling abilities.

After a night spent in tents with rain blowing in from underneath, we had seized on opportunity and turned Teds Beach into our base camp for the trip. We could dry our wet paddling gear and sleeping mats in the picnic shelter, an electric BBQ facilitated the preparation of gourmet meals by our head chef (Mick) and the picnic table provided space for maps, glasses of wine, and endless discussions about how much it rained in Tasmania. Mick started sleeping in the picnic shelter after Day 1, while Tony moved his entire tent in after Day 6. 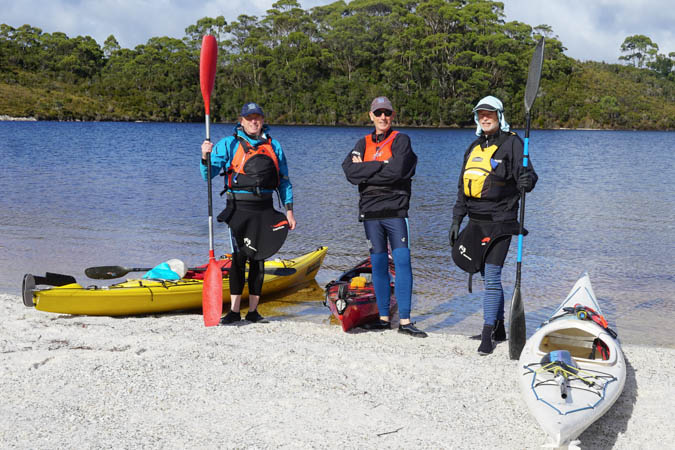 Mick, Tony and Lofty on Teds Beach. Once the sun came out on the third day we had some great day trips around the inlets and bays.

The paddling on the northern section of the 240 square km lake was interesting and varied. The original Lake Pedder was controversially flooded after the construction of the Serpentine and Scotts Peak dam in 1972. Part of the Gordon-Pedder hydro scheme, Lake Pedder is located in the South West Tasmania National Park, which is World Heritage listed. Unusually for a hydro lake, the lake level remains fairly consistent, so there is little scarring on the landscape around the lake. This combined with the absolutely spectacular and wild surrounding mountains made for some great scenery. 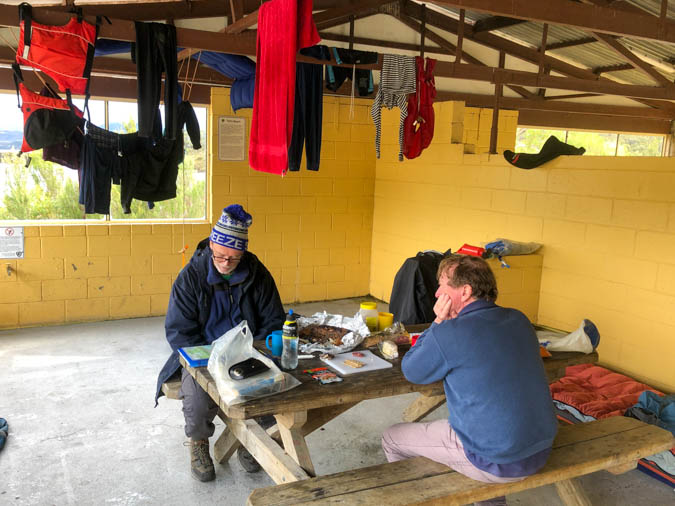 Beaches have formed on some banks of the lake which allowed for breaks on our day trips. Finding beach sites suitable for putting up tents was another matter so could have made camping difficult if we had toured the lake as planned.

To pass the time and to starve off 'Cabin fever' Mick and Tony entertained and welcomed the various visitors to the shelter. One couple made a repeat visit after a few days. Their first words on seeing us still perched around the shelter picnic table were simply “You still here?” 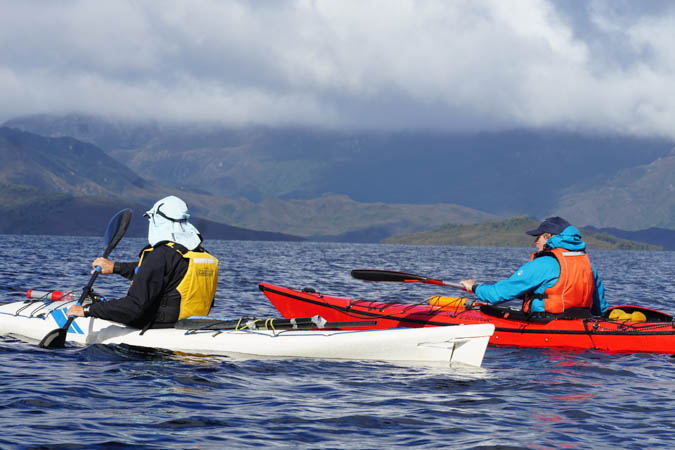 Larger open expanses of water provided some challenging paddling. Depending on the wind direction side waves and gusts put some of us out of our comfort zone. One day we paddled head on into 50 km per hour gusts. 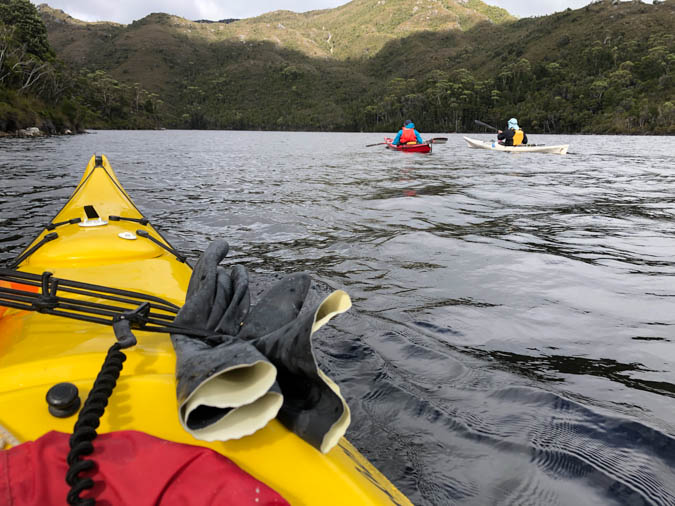 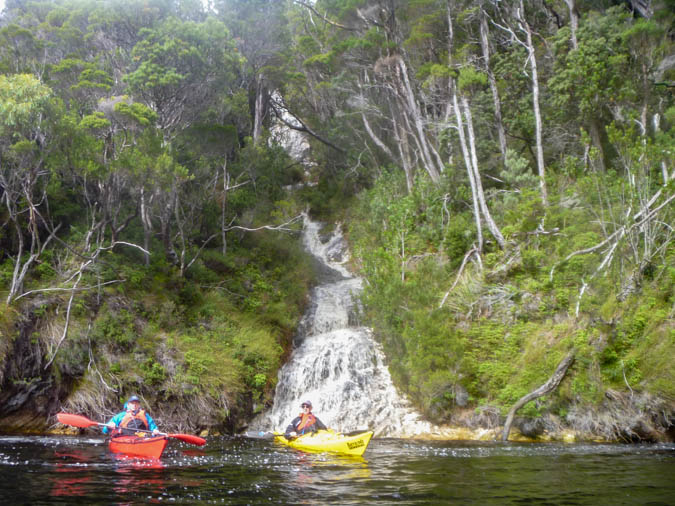 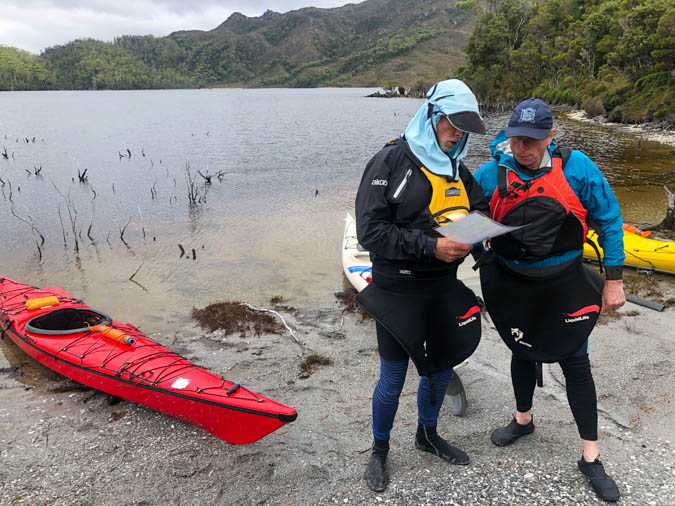 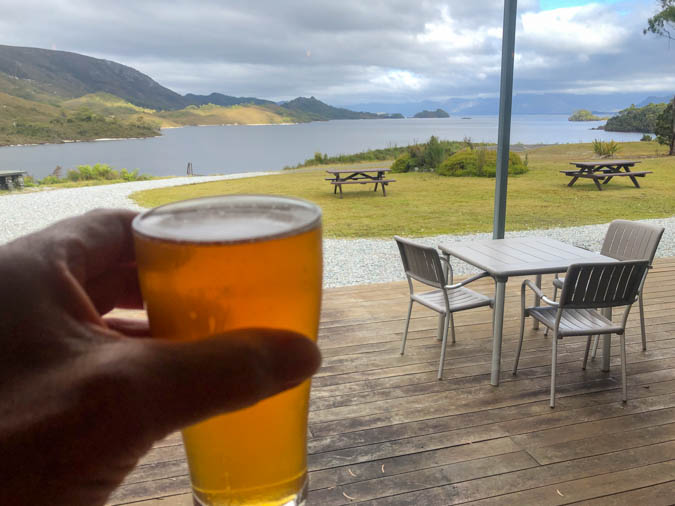 Thanks to Tony Payne for coming up with the idea and Mick Kane for catering for and cooking all of the meals. I am pretty sure we will return and hopefully next time paddle in the sunshine and camp on the lake shores instead of Teds Beach.