Alfred Otto Lucke – a champion of our club. Snippet 39 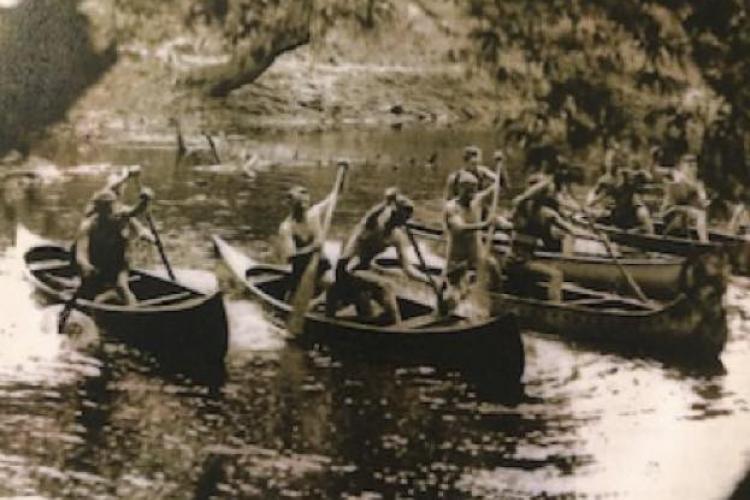 Recently hung in the clubhouse is this iconic photograph of the foundling Fairfield Canoe Club gathered at their “home” at Willow Dell (Fairfield Boathouse). We do not know the names of those photographed, other than the little girl framed by the lifebuoy and the man seated behind her. The girl is Kathleen and the gent, her father Alfred (Alf) Otto Lucke.

Like so much of our club history, a fascinating story lies behind the arrival of a true club champion.

This is one such story.

As Arthur Howard has written; “Brothers Alf and Gus Lucke were great canoeing enthusiasts, in their spare time they were one of the most successful back yard canoe producers. Years on when canoe clubs formed they turned their hand to building racing Canadian canoes”. 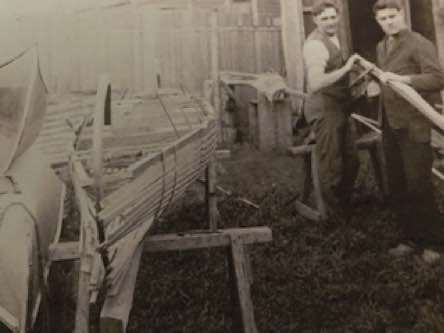 This was when our fledgling club ‘got lucky’. Howard goes on to describe; “All these new formed clubs got together and formed the Victorian Amateur Canoe Association in 1920.  The V A C A organized races between the clubs on the rivers near or where the club houses were situated, they all raced in their touring canoes with the exception of the V C C (Victorian Canoe Club, based in Kew) they could afford to have slim racing canoes built for them by the Lucke brothers, having the faster canoes the V C C became top club in canoe racing but not for long, within 3 months of joining along with the V A C A they withdrew due to personalities and classification of racing canoes.  In protest to the way the V C C carried on over the canoe situation Alf and Gus Lucke joined the struggling Fairfield C C at Fairfield Park and started building racing 18 ft Canadian canoes for them on time payment, this allowed F C C to become a top club.” 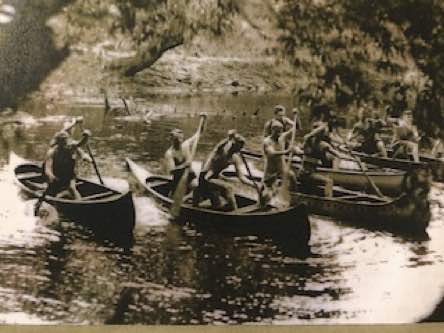 Alf Lucke was a champion canoeist in his day and clearly pivotal to the early success of FCC over the first ten years of its life. His success at the club is recorded in the May edition of the 1920 “Table Talk” magazine

“The Fairfield Canoe Club closed their active outdoor season recently with their first Annual Club Championship Race. Mr.L.Cohen (Fairfield) kindly donated the trophy for the event. The race was run off in three heats, and the final resulted in a win for A.Lucke, by a length and a half from J.Reeves, with B.Kerr third”.

This race was decided in the one style of canoe, the Peterborough Canadian canoe.

A greater appreciation of the dominance of the club in its first year is found in the FCC 1920 Annual Report;

FCC victories in its first year: Pairs Championship  of Victoria 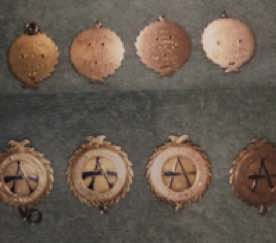 Perhaps, the greatest marker of the man was his contribution to both the purchase of the vacant block of land at 9, The Esplanade and the subsequent construction of the first clubhouse. Alf was one of the four names on the Title for what is now ‘our block of land’. This situation persisted until 1979, by which time the four original FCC Title holders – R. Bowdler, C.Williams, A.Shands and A.Lucke had all passed away. Thankfully the endeavours of the Club Committee at this time were able to ensure that the Title was transferred to the newly established Fairfield Canoe Club Co-operative. Our club is very privileged indeed to own its own clubhouse which is as a direct result of the endeavours of our founding membership.

Having purchased the vacant block at 9, The Esplanade, plans were drawn-up, funds raised and the first sod was turned in 1925. What is truly astonishing is the documented evidence that “A.Lucke” attended all but fifteen of the weekly working-bees from June 13, 1925 through to October 1st, 1928. A very major commitment indeed to the heritage of our club.

(The other leading light during these formative years was Harry De La Rue, more on him at a later date.)

Alf’s brother, Gus Lucke, also competed but does not appear in either committee or working-bee reports.

The grandson of the pictured Kathleen Lucke has made contact with the History Group and has forwarded several photos to add to our collection. Just like his great grandfather Alf Lucke, Keith Maher also has an interest in wooden boats. We are endeavouring to gather some of the many stories told by Kathleen about the river and her life as a young girl with her dad and the club