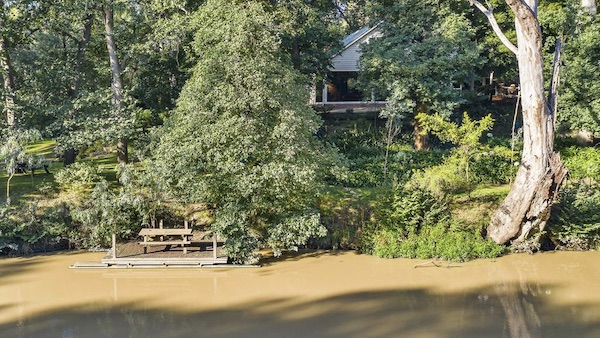 Macaulay’s Boathouse – as remembered by Kevin Hannington
Having recently explored some of the history of Rudder Grange, it seems timely to research some of the other boathouses that used to inhabit ‘our stretch of the Yarra’. One of these was “Macaulay’s Boathouse”, which is now called “Mole End” and changed hands for a mere $6 million in March this year.

It was this sale, and Kevin having previously mentioned his childhood association with this boathouse, that stimulated further exploration. Photographs, old and new, were sent to Kevin. These photos stimulated many strong childhood memories for both Kevin and his sister. They were amazed that the building sold for 6 million dollars.

The block was purchased by Ian Macaulay in 1887 and the original house was built as a residence and then developed for hiring out row boats to wealthy Kew residents.

The Sporting Globe in the October,1924 reports on the Henley Regatta and mentions Macaulay’s Boathouse and the significant divisions between paddlers and rowers for this major Melbourne event.

"The controversy waged over the inclusion of canoes in the racing programme in the afternoon has lapsed temporarily, but there will not be the same strong representation of canoe clubs on the river as formerly.

The canoeists have decided to hold a special programme of races further up the river on Henley Day, but in order to secure official recognition for canoeing at the regatta it is intended to send the craft from two clubs down the river to the pageant. The owners of the delicate and graceful craft are disappointed that they cannot have two or three events included on the Henley programme for races in pairs and singles.

They claim that it would be an invitation the public would appreciate but the executive of the Rowing Association consider that the programme is already too crowded to permit of the addition of other events in a busy afternoon.

The canoeists are determined to make a success of their rally at Kew. The site selected is that at which previous carnivals have been held between Macaulay’s Boathouse and the pipe bridge. The programme arranged for the afternoon will include singles (16-footers), pairs (any length), three (16-footers), hand paddling (pairs), relay race, tilting, crab races and tug-o-war. A wireless concert will be held later in the afternoon and a lantern parade will be a feature of the evening’s frolic."

Kevin, born in 1939, says his first memories of Macaulay’s Boathouse came in 1945, soon after his father returned from his wartime commitments where he was building airstrips in Queensland. His father would take him down to Macaulay’s boat ramp: “Dad taught me to swim down there as a kid, just down on the sand. He used to hold me on a strap and walk the edge of the landing, and I'd look up and find he had let it go and…..sink!” 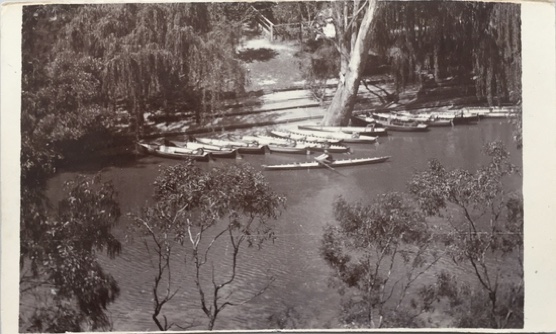 This old Picture Postcard, that the Kew Historical Society holds on-line, shows the boat ramps just as Kevin remembers. It must have been taken from the Yarra Bend Golf Course, sometime in the early ‘50’s. Bill Macaulay, the owner at that time, made all of the boats, including this clinker-built scull named “Kew” which is being rowed in the old photograph. Kevin remembers this boat well; he believes that it was the last boat built by “Old” Bill Macaulay.  Evidently, there was a long ramp running from the boathouse to the landing which meant they could single-handedly & easily drag their canoes, with a brass runner on the keel, straight down to the river. 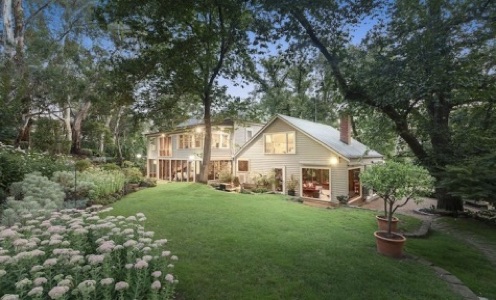 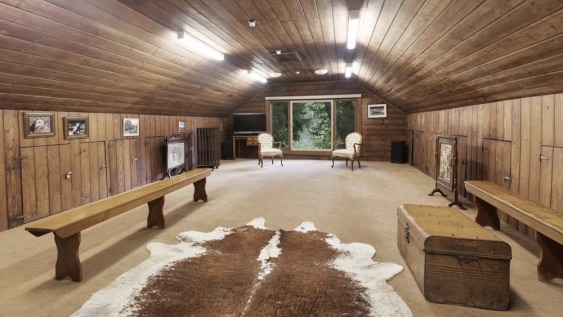 The Macaulay family lived in the two-storey house. This was later ‘loosely attached’ to the double-storey boathouse that housed the small “lolly-shop” and canoe storage. Above the boat storage was this long wood panelled room (see photo above). This was the Men’s Change Room with individual lockers along each side. Kevin says that this recent photo shows an unchanged locker room, “It is exactly the same”. The women’s change area was housed in a separate building.

It was here that young Kevin stored his canoe. A small charge was levied for this privilege. The fee was probably reduced as the young boys virtually “ran” both the Lolly-shop and boat- hire business during the weekends of the summer months. Coming down early on Sunday mornings they would bail out the rowing boats that were moored at the riverside (see below). Kevin says; “They had the best row boats on the river. Bill built them himself”.  By overseeing the hire-boat business, the boys thus allowed the new owner, Don Hanson who had married Alma Macaulay, to get on with his boat-building activities. At that time he built bond-wood boats and water skis and was not really interested in the row boat  side of the business, which  suffered as a result. It is reported that in the 1950s, hobbyists not only made water skis in the west room but a Tiger Moth plane was also restored in this room. 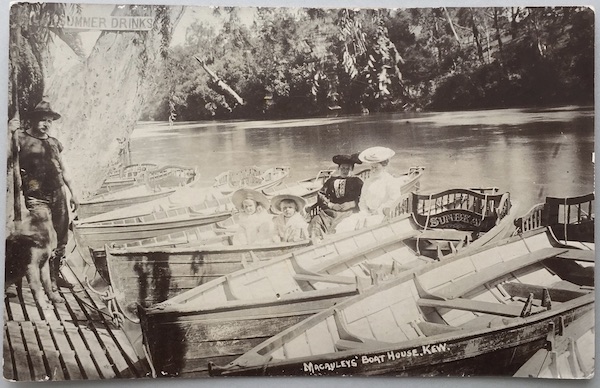 A whole gang of local boys ‘lived and explored’ the riverside around Macaulay’s for most of their schooldays. Cows grazed in the lower gardens with lots of opportunities for ‘cubby houses' and adventures after school.

They would take their canoes up to a local “secret” billabong and just rest in there amongst the willows. The river banks at this time, unlike today, were lined by weeping willows that had been planted to protect the collapsing river banks. Thus no fallen eucalypts across the river. All manner of adventures resulted. One of Kevin’s startling recollections was of two brothers deciding it was time for their youngest (non-swimmer) brother to ‘learn to swim’. He was duly thrown into deep water upon which “he thrashed arms and legs vigorously” until his siblings retrieved him.” He could now swim”. Kevin, of a similar young age, beat a hasty retreat that day!

After a large flood in the early ‘50’s, a “beautiful beach” was dumped at the big wide bend just  upstream of what is now called “Bellbird Park”. This was very crowded all summer, with children paddling a long way out across the river on the sandy spit. Paddlers had to keep close to the golf course bank to negotiate this shallow section. Swimming was popular and every year the was a Three Mile swim race for men from Fairfield Boathouse to Studley Park Boathouse and a Two-mile event from Fairfield to Macaulay’s  Boathouse  for the women. In fact, Macaulay’s had been a popular swimming haunt ever since it was established in 1890, at the river end of Molesworth Street . 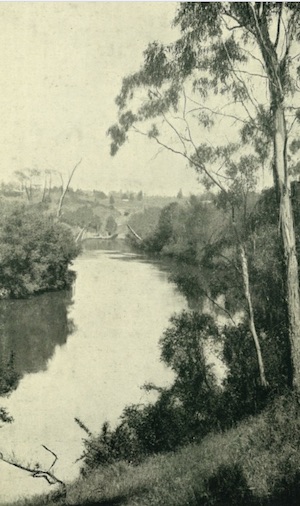 This pattern of lesser floods, followed by the occasional greater flood, continued into the twentieth century. The cycle of regular, widespread and often severe flooding was effectively broken by the completion of the Upper Yarra Dam in 1957. Macaulay’s Boathouse at, 8 River Retreat (cnr Molesworth Street), Kew, is a surviving example of low-lying house damaged in 1934 floods.

Another well-known visitor at this popular tourist attraction operated by the Macaulay family until it was closed in the 1950s, was young Barry Humphries (Ed. Maybe Kevin met him?).  Barry Humphries notes in his memoirs that he recalled it thus as a teenager: “It is Melbourne's Yarra I picture in my mind’s eye, down by Macaulay's boatshed at the end of Molesworth Street, Kew. Here, some way above Dight's Falls, breathing the mossy, mulchy, riverbank smells, I would often trail my fingers in the purling, topaz-coloured waters, and Mr van Denden, my friend Richard's father, vigorously paddled us upstream beneath tresses of willows and river gum. After such idyllic loiterings, the journey home by lumbering tram as like being jolted from some exquisite dream.”

Finally, some members of FCC now know the boat ramp at “Mole End“(Macaulay’s) as “The Loftus-Hills Memorial Pontoon”. You will have to seek out MLH himself for the full story.

(Ed: We think that it may have something to do with an unanticipated swimming event!)