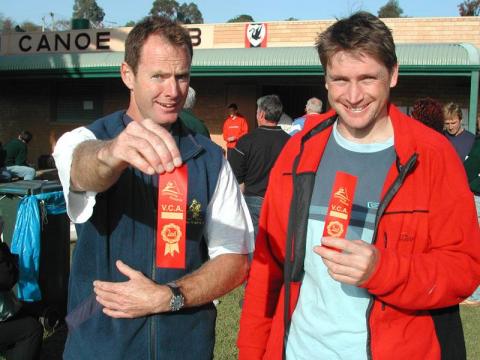 Resplendent in the FCC clubrooms, it might be easy to think that the winter series trophy has never has another home. Look back a few years, though, and there is a slightly different story to tell. Kerryn Bonnett, a Fairfield member in the 1990's, helped revitalise club interest in the the marathon winter series, in particular through the inter-club trophy. Kerryn's article, published in the mid-90's gives us a great insight into the history of the trophy and how involvement in the winter series shaped the club through the decade.

With race number one at Footscray now fast approaching, racing director Sophie Johnson has just put up the paddling list at the club. Book your club boats, get your name on the list - let's get Fairfield off to a flying start at Footscray!

It’s hard to believe it now, but in 1992 Fairfield Canoe Club members were a rarity at a VCA Winter Series race. When we entered at the registration table Wayne Cook, David Bellette and myself were the only Fairfield entries. And judging from the comments made by the officials, they hadn’t seen many FCC members over the previous few years. 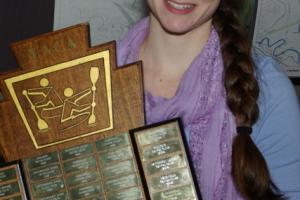 After learning that there was an inter-club trophy that could be won by any club, I decided to try to organise other members to race. I was having so much fun in my first season of racing, I couldn’t understand why more members weren’t competing. It sounded simple enough - we just had to get our members to paddle in the classes that were nominated and they would earn us points depending on where they came in the class. The club with the most points at the end of the season was the winner.

At the first race in 1993, held at Cobram, we caused a sensation - 25 FCC members turned up out of the blue! The marathon officials couldn’t believe their eyes when they saw the long line of competitors waiting to register. We took all the other clubs by surprise, and went on to win the trophy easily.

In 1994 Tony Payne took over as official Race Director. We had a bit more competition that year - the other clubs were ready for us and worked hard to beat us, but we were successful again.

By now the other clubs were getting tired of being beaten, and for a couple of years they introduced motions at the AGM to change the way that the points were calculated - but it made no difference.

In 1995 Tony led Fairfield to victory again. The pressure was on him in 1996 - could we be the first club to win the trophy four times in a row? Of course we did!

Unfortunately in 1997 we grew complacent, and despite the best efforts of Chris and Brian Troy to cajole and bribe members into paddling, we just didn’t have the numbers and enthusiasm of previous years. The result was a 2nd placing behind Ivanhoe-Northcote Canoe Club.

1998 was time for a come-back, so David Jerram and myself sent out a letter prior to the start of the season to get everyone motivated. The result was an enthusiastic bunch of club members who were once again prepared to race in any boat and with people they didn’t know to help us earn points, which led to another win. 1999 followed suit and the result is that FCC has now won the Marathon Trophy a record 7 times (we also won it the very first year it was introduced, 1979).

The club is now very different to the club I joined in 1991. It is now common to see members training during the week in the middle of winter, and the number attending Zoli’s Sunday sessions remains high all year round instead of just prior to the Murray Marathon. Members go to great lengths to gain points for the club - kayak paddlers give the TC2 class a go, TK paddlers wobble their way down the river in a K boat for the first time, and many people generously lend their kayaks and canoes so that others can compete.

The Marathon Winter Series Inter Club Trophy has gone a long way towards fostering a great club spirit at Fairfield.