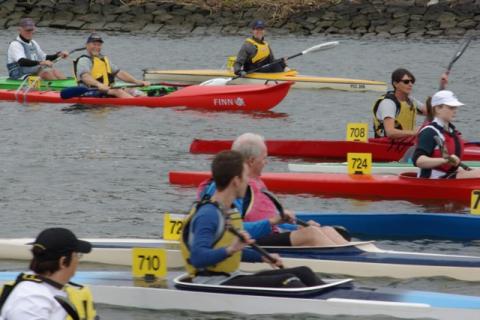 Christine Raviart joined Fairfield Canoe Club in 2012, and paddled her first winter series race last Sunday. Christine paddled on the Maribyrnong at Footscray Canoe Club in a club TK1 and apart from the hectic race start enjoyed the day. Christine says "the fact that even if you finish last you still bring points for the club has also encouraged me to participate"

When did you join FCC, had you done much paddling leading up the race at Footscray?
I joined FCC last November after doing the two day beginner course with Julie Perriam in November 2012 . My first objective, when joining FCC, was to get a little practice on the water before my first adventure race at Lake Eildon in December 2012 (see Christines article - link at the end of this article).

So far I have only paddled once a week at the Sunday training sessions. Before the race at Footscray, I had not  paddled for three weeks due to different racing events on week-ends (rogaining, orienteering foot & mountain bike and one adventure race at Lysterfield). However I have managed to do the time trial the week before at FCC, which was a good training and test for Footscray.

This was your first winter series race, what made you decide to paddle at Footscray?
I had decided to paddle at Footscray mainly due to curiosity and gain some experience. I thought it would be interesting to know where I was standing with my paddling so far and how I would "survive" with a crowd of kayaks on the water. The fact that even if you finish last you still bring points for the club has also encouraged me to participate, a way to thank every one at the club for all the advice and the warm welcome provided since I joined the club.

Did you enjoy the race, did the race go to plan?
Happily I had very good advisers on the day such as Mick, Kevin, Tony, Joe, Gary, Rose and more. They had explained what to expect on race day, the start and providing me some tactics for the start to avoid the rashes. Peter Hallyburton, Gary and Rose were in my division. Gary has suggested that I paddle a bit behind at the start and it was a great idea as three boats crashed just in front of us. Gary went to help the paddler in the water.

Before the start I felt very uncomfortable as I couldn't really warm up with all the kayaks already on water - it was a bit chaotic to be honest.

I had to deal with the wind, the other kayakers overtaking you sometimes very close so it was definitely a great experience. I had a good time. My sole regret is having changed my seat position and it was not a great idea being slightly uncomfortable for all race.

Any other comments about the race?
It was nice to get encouraged along the race by Tony, Sophie and Mick who were doing more kilometers than us. Gary overtook me at the end...he did suggest I wash ride up to the end but he was too fast for me 🙂 I hope to catch them next time!

Thank you to Joe, always helpful and especially Sophie who brought the kayak for me at the race. It was great to see her in actions on the water!

Have you started to train in a K1 for the next race at Patersons Lakes?Is next race not for double ? If yes, Perter Hallyburton and I may try a TK2 but we would need some practice for sure. Otherwise, I don't believe I am ready for a K1 yet -  pretty much enjoying the TK1 at that stage 🙂