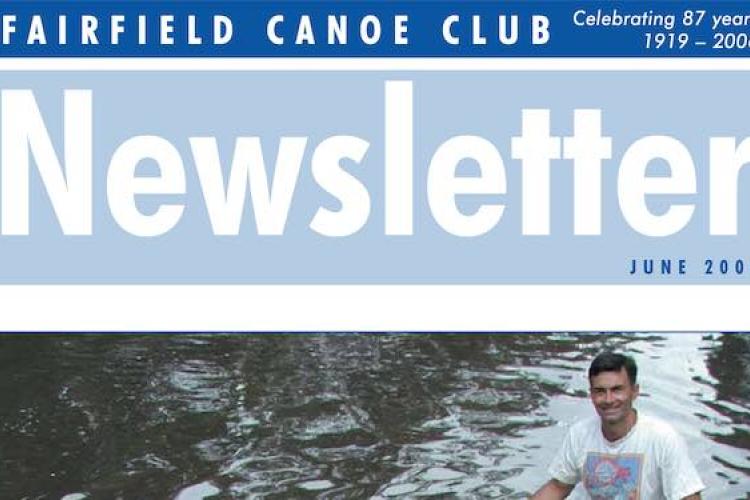 As part of the club history project Tony Payne has uploaded over 40 newsletters onto the website Do you have any old newsletters that are not in our collection? Please let us know. See what club members were doing in 2002.

The Yarra has many moods – from fast-flowing to slow and languid. Some sections of the river, however, have a mood and character  of their own, no matter what is happening elsewhere on the river. The stretch upstream from the club to the Chandler Highway Bridge is always a malevolent stretch – even when flowing slowly.

As a beginner, whether from over-confidence or incompetence, going for a swim was standard.

I AM NOT PARANOID, BUT THE RIVER WAS OUT TO
GET ME!
So it was during the recent high water flow on Sunday 17 October (when the river reached 2.4m at the Fairfield gauge – normal is about 0.3m), as I headed upstream for the Club training session this same section of the river showed who was boss. I purposefully took a canoe thinking, “I can’t fall out of this!” Wrong! The flow was strong and difficult to handle and without a rudder challenging.

Edging along the bank I made it passed the first corner, passed the concrete culvert and headed towards the Bridge edging around the trees. It was then that I came to grief. Half way to the Bridge the current pushed me out from the bank into the centre of the river. I thought, “This is OK, I’ll just spin around and have another go.” What I didn’t notice was the waves in the centre of the river.
It seemed to happen in slow motion, but I before I knew it,
I was out and in the water.

AM I OK? NO!
At this point you go through the checklist: up-right the boat, put the paddle into the boat, turn it downstream and swim for the bank. This all started off well. I was being carried down stream quite quickly, but choosing which part of the bank to head to wasn’t an option. At first you wonder how this all might end, then you make progress and gain confidence. But the river took over and decided my fate. I thought I was making good progress towards the bank when I was swept into three saplings that are not normally in the river. This is when things did go wrong. On hitting the trees the boat tilted and filled with water and struck fast against the trees. I tried to pull it off, but I couldn’t get the leverage. Fortunately, it wasn’t far to the shore and I was able to haul myself out. I then made a rather defeated walk back to the Club for help.

RESCUE IS AT HAND
With rope and Rowan’s assistance, we made an attempt from the shore to drag the canoe off the trees, but without luck. It was then that the fearless trio of David, Rowan and Joe took a tinnie and see if they could rescue the canoe. And so it was, through daring manoeuvres they were able to edge the canoe off the trees and bring it back bent and battered, but in one piece, to the Club.

A SERVICE TO THE CLUB!
All this took place whilst the club training session was taking place upstream. The canoe was on dry land and I had already showered by the time everyone returned. I was then asked, “Where did you get to?” It was then that I realised a disastrous morning can still be of some use as although they didn’t enjoy the conditions much at the training session, it made everyone feel better to hear that someone else was worse off!

Editor’s note: Despite Andrew’s self-deprecatory story it is worth noting that after completing the club canoe course he has gone from strength to strength in the canoe – even picking up a bronze and silver medal at the recent Victorian Championships.