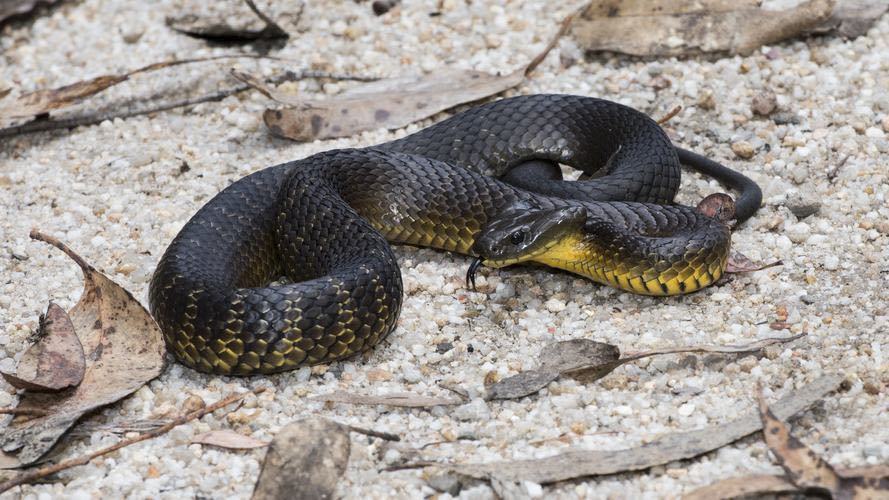 One of the great attractions of paddling at Fairfield is the seemingly endless opportunities to spot wildlife in and around the river. There are a multitude of birds and at different times of the year you are likely to spot turtles, water rats and water dragons and perhaps an elusive platypus.

However not all encounters are as exciting as that experienced by first time paddler Joady Donovan and experienced paddler Shawn Ramraj back in 1999. Imagine paddling along the river and the next thing you know a tiger snake has hit the side of your TK2, lifted its head a bit further and slithered into the front cockpit down between your legs and headed up to the front of the boat! What happens next is a wonderful example of cool headedness in a crisis……

.“Into the boat the snake slithers and decides to check out the invitingly dark and safe looking nose of the boat. Shawn retracts his feet, I'm not sure whether this happened before or after the snake passed them heading for the front of the boat - and I'm not sure that he could answer the question - and hangs his feet over the side of the boat.

Meanwhile, Glenn Anderson paddling with Nicky nearby, witness some or all of the event and come barrelling back down the river to the jetty, "Get the boat out of the way, there's a snake in the boat!" …..Then we all see Shawn and Joady paddling calmly, if not looking a trite strange given that Shawn's feet are trailing over the sides of the boat as they power along. They dock, we grab their boat. They both dismount and the first question that passes my lips is, "Okay, Where is it?" "It's in the front of the boat behind the foot plate," answers Shawn calmly. He follows this with "lt's probably harmless anyway." In order to confirm this we ask them what the snake looked like. Joady answers with, "lt had yellow stripes". "Sounds like a tiger snake," I said.

Shawn and Evan try to tip the boat and succeed in getting some water into the boat. The snake came out from behind the foot plate and slithered on to the front seat and reared up to take a look around. It was definitely a tiger. After some brief deliberation involving paddles and shot guns, the guys then tip the boat again and the snake falls out and swims to the opposite bank. Mission accomplished.”

Or perhaps you would like to know what to do if you find a live horse stuck in the river near Zoli straight?

“Our beloved race director (Tony Payne) has been known in the past more for his ability to knock mother ducks from their flight path that for his animal-rescue skills. However the RSPCA are considering nominating him for a silver medal in watery rescue in the light of recent events. One morning while on an early training paddle Tony spotted no less than a horse struggling to get out of the Yarra near the AMCOR outlet. He alerted the RSPCA after his arrival at work, but had to return to the river later to help the would-be rescuers find the animal. At the last minute Tony spotted it and the pony was saved. Our thoughts go back to Margaret's sheep rescue during the Geelong race last year... Tony completed his 'animal encouter trifecta' recently, when a pelican just missed him at Geelong when coming in to land.

And watch out for low flying ducks at twilight as they can cause quite a disturbance if they crash into your head whilst you are paddling …….” (May 1995 Newsletter p12).

Or maybe you would like to learn how to best manage a drowning rainbow lorikeet?

Hamish Ewing had just set off upstream when he came across a crowd of squawking, agitated rainbow lorikeets. The centre of their anxious attention was a companion floundering midstream and showing no signs of resolving its predicament. Easy solution, Hamish to scoop-up the bird and deliver to the bank to dry-out. Scooping the lorikeet was straightforward but it then, most ungratefully, forcefully bit the thumb, drawing blood and refusing to let go! Thankfully it eventually came to its senses after some invective-laden encouragement.

Finally, what do you do if you see a sheep stuck in a fence near Alphington?

“Roger Trallagan, Andrew Wright and two witnesses were happily paddling along in Alphington one November. 'Sheep in distress!' calls Roger, and he gallantly abandons his boat and climbs up the bank to rescue the animal from the grip of the fence. All it took was one shove for the bleating victim to leap backwards into Andrew’s arms and the two of them were happily carried down the river in the K1….so the story goes!”  (Feb 1998 Newsletter)

Next time you are out on the water, “Be alert, but not alarmed”!

Over 50 issues of the club newsletter are available for download on the history pages.