HISTORY SNIPPET: “IN A CANOE HE WAS EQUAL TO ALL OTHERS” 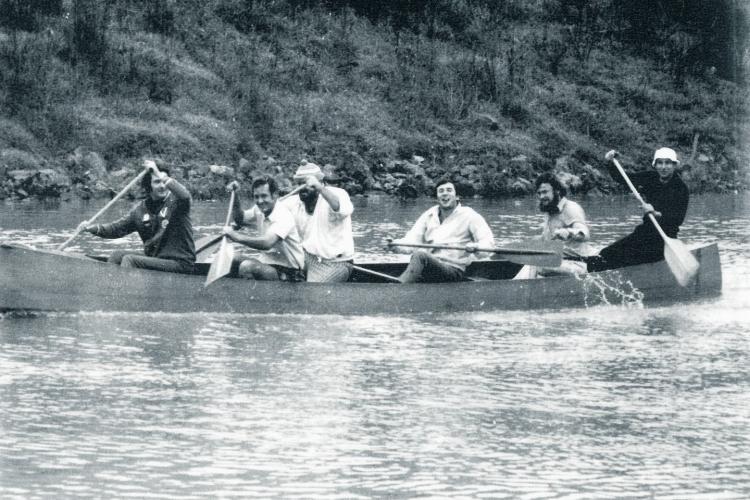 This is a tribute to Rimvydas Švambarys, who was a member of FCC for more than 40 years. Rim, who died in 2014, left $10,000 to the club as a bequest in his will. The TC2 Toro (painted in British racing green) that Rim built with Bob Pierce is still in use today as part of the club fleet.

In 1986 ten Fairfield Canoe Club members were travelling through the night by bus to take part in that year’s Adelaide Dragon Boat Festival, at a time when Halley’s Comet (a significant astrological event) was visible at night. The hired bus driver was on his second shift in a row, and the bus was drifting into roadside gravel each time the bus driver nodded off.

Suddenly one team member hit upon a solution. Whenever the bus started to drift off the road, the team would yell out “Stop the bus!”, claiming to have spotted Halley’s Comet. They would all troop outside to check, bringing the bus driver some much needed fresh air.

his loud booming voice did the trick every time

Rim Švambarys was on that bus and his loud booming voice did the trick every time. He was in his element during that trip, chatting to all and sundry along the way.

Rim’s presence at the club made a lasting impression. He was big, he had a limp, and boy, could he talk! He was kind and always ready to help anyone.

Rim’s family emigrated to Australia in the 1950s after a number of years in a German displaced-persons camp after World War II. His father was the headmaster at the DPP camp, and had an interest in boats and boat building. Rim had caught tuberculosis of the bone as a child in Lithuania and had spent many years in and out of hospitals. The disease left him with a severely disabled hip joint, limiting the sports he could take part in. After the family’s emigration to Australia, kayaking presented itself as an attractive option for Rim. He joined the Fairfield Canoe Club in 1959, and found paddling a refreshing contrast to his demanding work at the Department of Defence.

Rim took to kayaking with a passion. While he took part in races run by the then Victorian Amateur Canoe Association as well as many Murray Marathons and some dragon boat racing, his real joy was in recreational paddling and boat building. Rim recalled doing two trips of about 4 weeks’ duration down the Darling River in the 18-foot timber touring kayak which he built with his father, covering more than 1000 km. Eventually Rim’s physical restrictions made kayaking too uncomfortable so he switched to Canadian canoeing, where the higher seats and different posture relieved some of the pain.

Rim became a key member of various C7 crews. One C7 was built in Adelaide under instructions from Roger French, originally as a kneeling boat. Fairfield bought it and paddled it in the 1976 Mini Marathon, as Jonathan Mayne recalls "against a team from Yarrawonga who boasted how they were going to give us a lesson in paddling. They had a conventional touring canoe with a mid section added which was longer and narrower than our boat. Aboard on that occasion were the Kerekes brothers (Andrew and Arkosh), Kevin Hannington, Helmut Rietmueller, Peter Mahler, Rim Svambarys and me". Both crew and boat were a success, says Jonathan Mayne, who explains that “after rounding the first bend out of Echuca, we never saw the guys from Yarrawonga again”.

Michael Loftus-Hills paddled with Rim in another C7 crew on the Murray Marathon in the mid 1980s, where he recalled the boat breaking in half, somewhere between Yarrawonga and Tocumwal. Some local campers helped to fix the canoe, probably persuaded to help by Rim, who was always up for a chat with anyone in the vicinity.

In 1988 Fairfield Canoe Club entered two C7 teams in the Murray Marathon. Rim took on the role of steerer for the older, veteran (Vet 40) team. Michael Loftus-Hills was part of the younger team who were paddling a former kneeling racing C7 that had had seats added. Michael recalls that Rim's team surprised his team by being extremely competitive. "We were really concerned they were going to beat us. We just assumed that we had a faster boat and we were younger and fitter, I think they really put the wind up us. We had a team meeting on Day 2 and realised we to paddle a lot harder. Rim always let us know that they were not far behind. The C7 team, steered by Rim, still holds the Murray Marathon Vet 40 record (as of July 2020).

Rim was larger than life both on and off the river. He would fondly recount many funny stories about paddling to other club members, including a fast trip from Heidelberg to Fairfield in under an hour when the river was in flood, taking the short cut directly over the golf course. He also remembered a time when the flooded river lapped at the doors of the old club house. Perhaps the funniest story was of the time a tiger snake slid under Rim’s seat to the back of the canoe. Filling the canoe with water didn’t encourage the snake to leave, so they loaded both canoe and snake onto the roof racks and took it home. Eventually they discovered that snakes don’t seem to like hot water as that was the only thing that got it to move.

In pursuit of his love of boat building, Rim spent much time building canoes. In the early days all canoes were made from timber; it wasn’t until many years later than fibreglass became popular. Rim’s friend Bob Pierce was an ex-Government aircraft factory worker and was one of the first people in the country to experiment with fibreglass in boatbuilding.

Michael Loftus-Hills remembers his first visit to the Clifton Hill factory where Rim and Bob built their boats. There was a strong smell of resin in the dark building whose walls leant on all sorts of angles. The dilapidated building was at odds with the sleek new Toros that Rim and Bob were building.

Foster Rossetto recalls his own visit to Rim and Bob's workshop: "I got a shock, I'm going in and there's a 44-gallon drum of acetone, the lid is off, waste in the bins, fibreglass, etc. and there's Rim smoking away!" I said, "Geez, you're going to blow the joint up!" "Nothing will happen," he said. I said, “Make sure, because that 44-gallon drum is a bomb!" and so, you know, that's how my long connection with Rim started.

Rim refused to go on any FCC committees as he felt that working in the Defence Department had exposed him to enough organisational politics. However, he found the camaraderie and atmosphere at Fairfield wonderful. He has recognised the important place that the club played in his life with his generous bequest to the club.

… I would also like to thank you for getting in touch with us in order to let us know how Rim's bequest will be used. The Fairfield Canoe Club and in general canoeing played a very significant part in Rim's life. He could not play footy or cricket, but he was equal with all others in a canoe. The whole family had a great time either watching him canoe on the Yarra or take part in the Murray Marathon over a number of years …

The History Committee would like to thank all who contributed to this article. If you have further information about Rim or other details or photos relating to FCC's history, please contact Hamish Ewing.