History Snippet – “Where is this tree and what does it mean to the FCC? –   a neighbour’s history of Rudder Grange”

This photo, of course, is of the former site of a famous riverside boathouse and tearooms of yesteryear. The photo was taken at the bottom of Alphington Street where Rudder Grange was sited, the tree being the ‘canoe tree’ that stood proudly adjacent to the Rudder Grange Boathouse. Today, all that remains are some history plaques marking the site and the tree stump retrieved after it fell into the river in recent years. 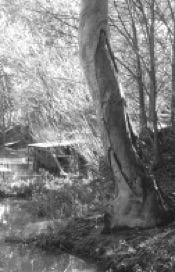 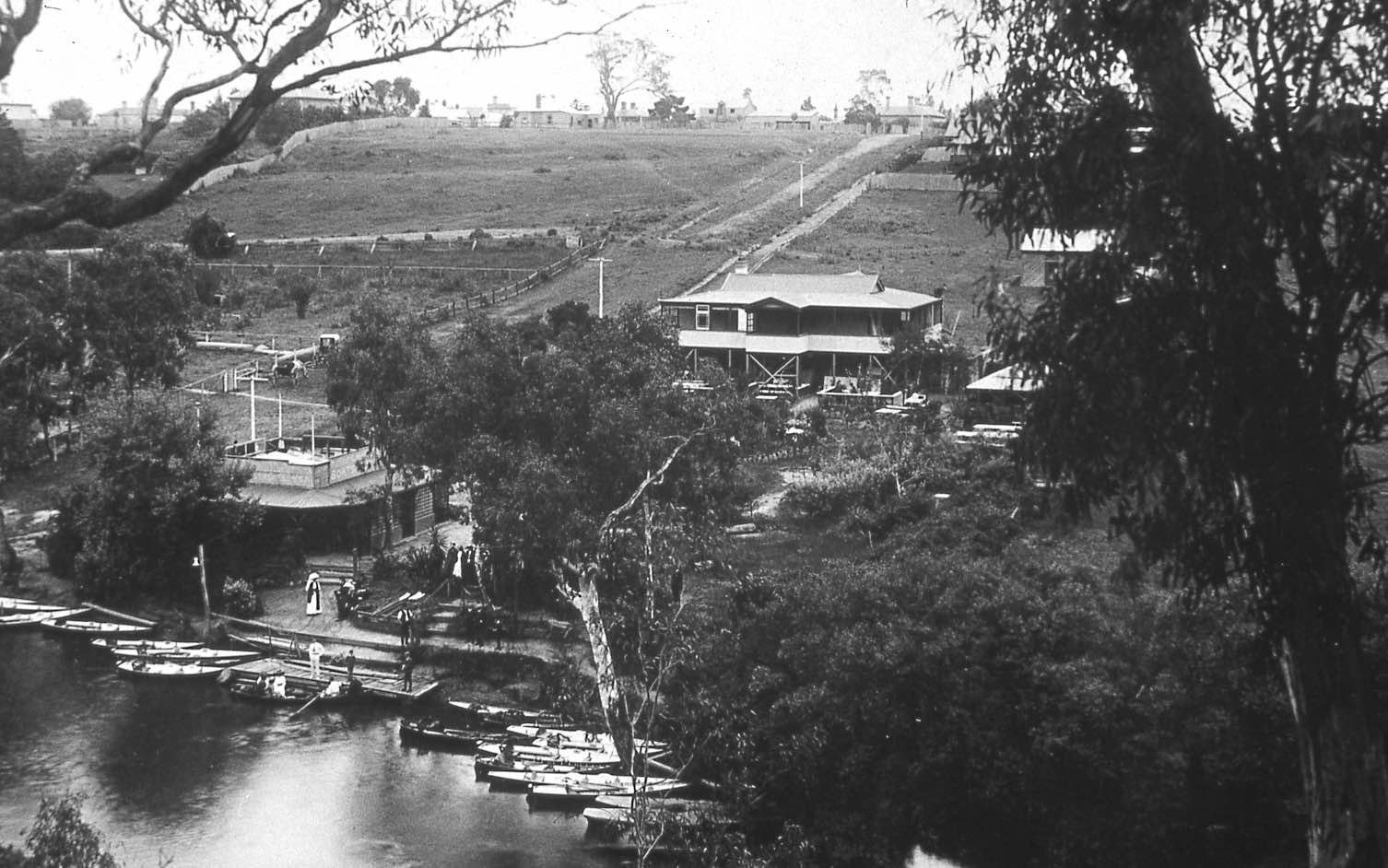 What is the story of this institution and how do the histories of Fairfield Canoe Club and Rudder Grange Boathouse intertwine?

In the 1870’s, rowing and then canoeing became popular. These were the “Gentleman’s sports” for the professional people of the day. People were attracted to the river where tearooms and boathouses appeared.  The working-man also came to the river, however they could not afford to boat, ‘it cost money’ but the arrival of a number of boathouses that both rented and stored canoes, paddling became an option for them too.

‘Rudder Grange’ Tearooms was built in 1904 by the Cooke family, this boathouse became a popular destination on the Yarra River and the business prospered. There was a major flood in June 1911 and as reported in The Argus: “At the Rudder Grange tearooms, the roof of the building can just be seen above the water-line. The gardens connected with the tearoom are under water, and a small stream is trickling the gate at the rear of the refreshment room. From this the people who know the spot can form a fair idea of the extent to which the river has risen. Mr E.D. Cooke, proprietor of Rudder Grange, states that although he has 30 boats, none of them have been damaged”. As a result of this event, the original humble building was replaced by a substantial two storey building sited further up the hill. 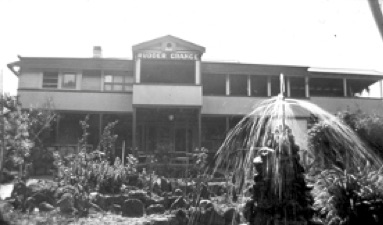 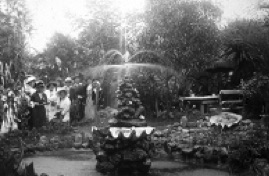 An idea of the type of clientele visiting is evident  in the ‘Social Notes’ pages of “The Australasian” in 1913:” A delightful form of hospitality was extended by Dr GA Syme and Mrs Syme on Saturday afternoon to the members of the ‘Wallaby Club’, and a large number of ladies. The total number of guests being nearly one hundred. The ‘Wallaby Club’ is a masculine coterie, the members of which spend most weekends “on the wallaby”, or, in other words, in long country walks. But on these occasions the feminine element is rigorously excluded, so the gathering on Saturday had two features – one being the presence of ladies, and the other being the novelty of the outing which was an excursion by water to Rudder Grange, Fairfield. The starting-place was the boatshed at Studley Park, where motor-launches and rowing-boats (which were towed by the former) were waiting. On arrival at Rudder Grange, through some really beautiful reaches of the Yarra, the guests found a delicious afternoon tea ready for them on the balcony of the pavilion.” There are numerous reports in the newspapers of the day depicting similar events which would often continue into the evening with music and lights on the water.

It was after the Great War that we commenced our shared history with Rudder Grange. Returning Diggers came to the riverside and paddled canoes again. They duly formed the Boomerang Canoe Club which was based at Rudder Grange.  Cooke’s old records show the forming of the Boomerang Club. As Arthur Howard records: “It seems that the war eased the class barriers as those that didn’t go to the war and the returned men got on very well together in this club, canoeing up river on picnics and to the “Ryver Brink Cafe” for meals and the popular Saturday Jazz nights, also canoe racing and novelty events that Edmund Cooke, the proprietor, organized from time to time to entertain his cafe patrons.  These Boomerang Canoe Club men liked to have a drink and started to bring it down to Rudder Grange, it was one of Cooke’s policies that there were to be no alcoholic drinks on the premises, he asked the club members to mend their ways or take their canoes and leave.  Fourteen decided to leave, packed their gear into their canoes and paddled downstream to the Fairfield Park Boat House, known then as “Willow Dell”, where canoe storage was available.  Within weeks of leaving Rudder Grange they established a new club, the Fairfield Canoe Club, in March 1919.This being their headquarters for several years”. However, as Arthur Howard also relates, events took a familiar turn with this group: “It was from the annual carnivals that the F C C organized and when the public came to watch they sometimes gained members. After a very successful carnival in February 1921, some of the members had a little too much to drink and the proprietor of the Fairfield Boathouse closed the club room, but not the canoe storage, to members of the F C C”.  It seems history had repeated itself, this time with their new proprietor. Then: ”In September it was moved that a deputation approach Edmund Cooke at Rudder Grange by F C C members to see if there was a chance of coming back to the Grange.  The President J Cain M L A (senior), Secretary J Shands and Harry De La Rue were chosen to try and make peace, Cooke agreed they could come back and share the room and landing with the Boomerang Canoe Club (their former mates), but he had no canoe storage so meetings were held back at the river again as well as canoe activities off the Rudder Grange landing”.

The Herald on 24th March 1921 reports: “ Owing to several of its leading members leaving to go on the land, the Returned Soldier’s (Boomerang) Canoe Club has been disbanded, but a new club, open to all amateur canoeists, is being formed at Rudder Grange to take its place”. There is no record to be found of this new canoe club being formed at this time.

By 1923 the Fairfield Canoe Club decided to make a bid for its own premises, a selection committee was set up to locate a club site along the river with suitable water frontage, after many enquiries  they located a block of land in The Esplanade, Fairfield which they thought would be the ideal place to build a club house . However, it was not until 1928 that the long-awaited clubhouse was completed. In the intervening years Fairfield would hold Canoe Carnivals which were based at Rudder Grange. These carnivals would go into the evening and even as late as 1930 the ’FCC Canoe Orchestra’ provided musical entertainment. 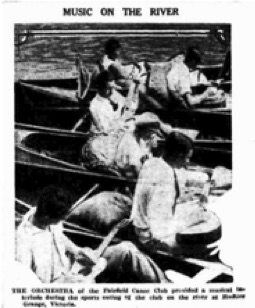 In December 1938 the Cooke family sold the property to a long standing popular F C C member, Carl Sierakowski (for business reasons, later shortened to Sierak) bought Rudder Grange and took several members with him to establish a canoe centre. It was then that Arthur Howard also joined the boat and canoe building business; producing quality timber craft (see photos) 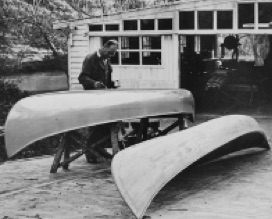 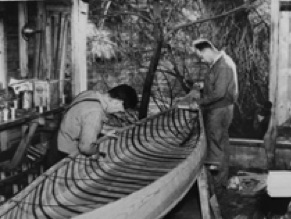 At some stage in the early 40’s, or late 30’s, Arthur Howard and some others formed the Rudder Grange Canoe Club. (The precise date is caught by COVID & is locked away in the Howard documents archived in the Clubhouse). The Age reported in May, 1949, that Rudder Grange Canoe Club won the Victorian Canoe Association’s Championship for the first time. They finished 4 points ahead of Fairfield. In the early 1950’s Rudder Grange was sold again and it slowly slid into decay with the new owner less keen on boat building.

However, the RGCC continued for some years as it was reported in May 1956 that some twenty club members helped in a search for the 2-yr old daughter of the then proprietor, Mr Clive Caporn, presumed drowned in the river. It was about this time that the RGCC slowly dispersed bringing with it a final interaction involving our club.

It seems that Arthur Howard, Jim Smith and others came across to Fairfield Canoe Club while another group from RGCC  created a new canoe club, and as recorded on the INCC website: “The Ivanhoe Canoe Club was founded in 1956 by Ross Chenoweth after the demise of the Rudder Grange Canoe Club and the closure of the Rudder Grange Boathouse and Tearooms. The club initially consisted of a trailer of boats, which were towed to the river two or three times a week. The original ‘put in’ was at the old swimming pool steps in Alphington Park just upstream of the paper mill.

In the early 70’s the club was invited by the Northcote Council to use the Panther Pavilion in Fairfield Park. The club changed the name to Ivanhoe Northcote Canoe Club at that time.”

FCC Life Member, Tom Ohman, reported: “There was some ill feeling after Ross took all boats etc. and bulk of Rudder Grange Club members to his newly formed club, Ivanhoe Canoe Club (ICC)”. Interestingly, it is recorded in 1956 FCC Minutes that there were still some ICC boats stored at FCC at 30shillings per boat, per annum. (“A good little earner”!)

By this time, changing tastes in recreation had left the Rudder Grange Boathouse behind and in 1963 it finally closed.  The buildings have since been demolished and all that is left is our initial photo of the ‘canoe tree” and several history marker plaques.

However, the sibling rivalry between the two clubs spawned out of Rudder Grange persists!

Photos used in this article are taken from this Darebin Heritage source. The RGCC paddle illustrated was made by Arthur Howard. Arthur was not only the resident boat builder at Rudder Grange but also a wonderful recorder of the history of paddling in Victoria. We constantly draw upon this material. His final home was on the riverside corner of Alphington St. and The Esplanade.