The night that Sally was slashed at FCC - History snippet 26 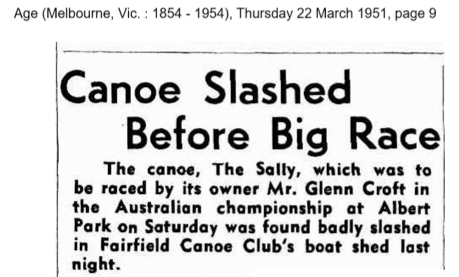 We all consider that our era is a time of the most intense sporting competitiveness.

Dredging the newspapers of old through TROVE  would suggest that this is not the case (sandpaper ball-tampering aside!) and a FCC boat is evidence of  this.

“It was the second time the “Sally” had been extensively  damaged just before an important race. Last August, just before the Victorian championships, the canoe was damaged when caustic soda was thrown over it. Mr. Croft repaired the damage, and came second in the championship.

The “Sally” is reputed to be the fastest racing canoe in Australia.

When Mr.Croft went to the boat house last night to take the boat out for a practice run he found several long slashes had been made in the canvas skin, apparently with a knife. One slash was more than four feet long.

The boat will take at least three weeks to repair.

Mr. Croft said he might have to use a borrowed boat. That would be a handicap, as he was used only to his own boat.

It was possible that the committee might pool all boats and hold a draw by contestants.”

Intense competitive spirit aside, it is fascinating to observe that in 1951 “The Sally”, a canvas covered canoe was considered “to be the fastest racing canoe in Australia”. What became of Glenn’s tilt at the Australian Championship?........find out next week!

The Centenary History Group is very interested in the evolution of our boats over these 100 years. Do have any interesting stories to relate? Have you built your own craft?

Epilogue: “The night that Sally was slashed at FCC”

It appears that Glenn Croft carried all before him and ‘slashed’ the field in the Australian Championships after all! 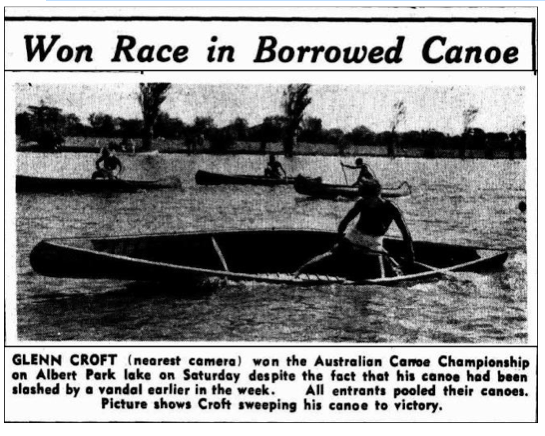 The true spirit of sport survived. I wonder if the ‘Slasher-of-Sally‘ was in that race?

Glenn picked-up several security guards for the Championships in 1952 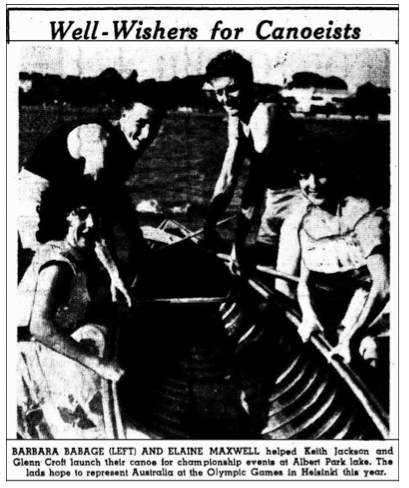