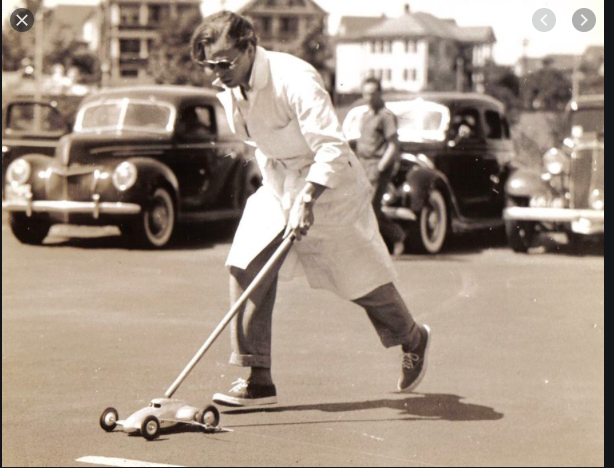 A recent conversation with a former club member turned-up an interesting piece of information…..the old Clubhouse was the setting for “Tethered-car racing”! What on earth is this about and can it be true?

Our oral history interviews have certainly revealed that in the decade after the Second World War the club was in serious financial trouble. Thus a potential revenue raiser was to take full advantage of our asset – a splendid, or at least a once-splendid, "hall for hire".

We have Club Committee Minutes covering 1953 – 1957. Here we find that we rented boat space to the fledgling Ivanhoe Canoe Club at 30 shillings per boat per year. In addition there was a Coca-Cola fridge which raised small profits. 1966 saw a profit of $1.50! (Ed.It is also noted in the minutes that there was an ongoing agenda item regarding this fridge with missing keys and the non-payment for drinks which was clearly eating into the profit margin!).

The clubhouse was  rented-out to the VACA to hold film nights. There is no record of how much was charged. However, and interestingly, it is later minuted that VACA would “be no longer charged but they needed to give due notice of an event”. It is also noted that: “A letter received from Tachiwaza School of Judo advising delay in hire of our hall”. There is no evidence of this school ever taking-up an offer to rent our hall nor any reason for an apparent change in of mind.

What about these “tethered cars” then? Well the story is that a young local lad remembered coming down to the Fairfield Canoe Club with his grandfather to watch these glow-plug-powered cars race around the clubhouse. Ken Wilkes was Club Treasurer from about 1953 and he has no memory of such events, thus, it was likely to have been from an earlier time, or young Ian has the wrong venue in his memory. The latter seems unlikely as he describes the hall having a bowed-sloping floor. This description fits all those given to us by others! Ian went on to explain: “The model cars were about one foot long, tethered to a central pole and reaching up to 100kph”.

Interestingly this sport continues to this day in a number of nations across the globe. World championships having been held in Brisbane in 2019.There is even the Tether Race Car Association of Australia (TRCAA) (http://www.trcaa.org/news.htm). It seems that this sport came to the fore during WW2. Here is an article published in the Melbourne Herald, April 22, 1940.

A new form of speed motoring has become popular in the United States. The cars are only a foot long, weigh about 5lb. and are equipped with tiny petrol engines.

These models are raced within a circle of 220 feet, and the method adopted is as follows. In the centre of the racing area, a ball-bearing swivel post is erected and the cars are tethered to the post by a 35-foot cord. Many ingenious ways of starting the little cars are adopted ranging from the old-fashioned thong to the use of a 6-volt battery. At the completion of the test against time one of the timekeepers reaches out with a long stick and knocks down an eight inch extension switch which is attached to the engine thus stopping engine and the car. Many owners have their own special blends of petrol or dope, the nature of which they do not divulge.

The cost of buying components and assembling these racing miniatures ranges from £10 upwards. There are front-wheel drives with engines on the front axles, as well as rear-wheel drives, direct gear drives and friction clutch types. It is left to the ingenuity of the assemblers of the machines to design and devise their models with a view to obtaining the utmost speed. 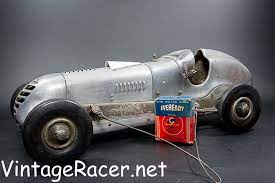 The size of the clubhouse must have demanded a shorter length tether. One can only begin to imagine the fuel-laden smells and the loud noise that this closed-space event must have generated! Let alone consider the danger inherent with these cars flying around the small space at significant speeds.

Check-out this site to see the sport in the US today (https://www.youtube.com/watch?v=DBCs8Nn_2lk) 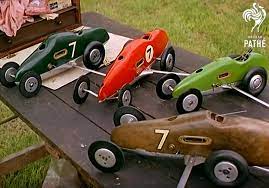 Question for our readers: ”Can anyone verify this story?”