History Snippet - “Tethered cars to the rescue, OR WERE THEY?” (A postscript) 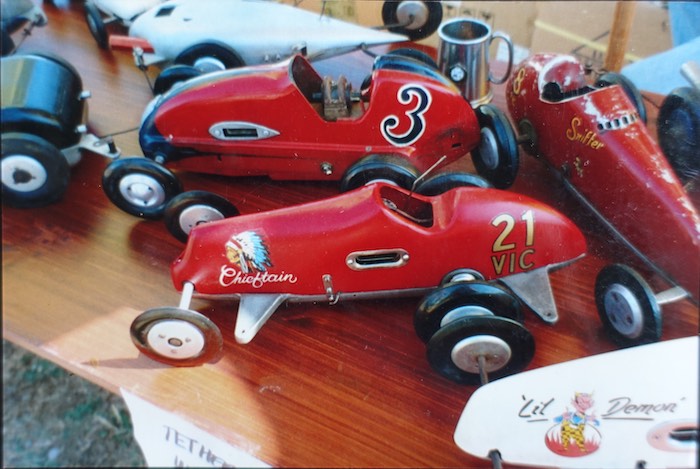 Following the recent snippet on hiring out the FCC clubhouse to raise funds we have successfully confirmed the fact that the clubhouse was very much part of the local tether car action in 1947. The powers of the internet led Ron Savage to contact us. Ron is a tether car enthusiast and he has generously provided a wealth of material to us.

As seen in the Adelaide Advertiser, 11th June 1947 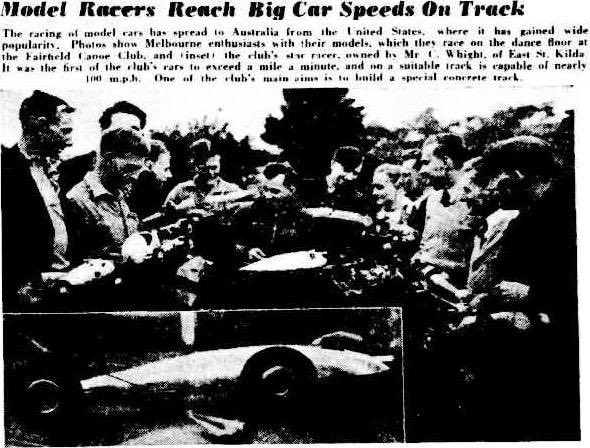 There are numerous reports on the activities of the Victorian Miniature Car Club (VMCC) in the Australian Motor Sports magazine. 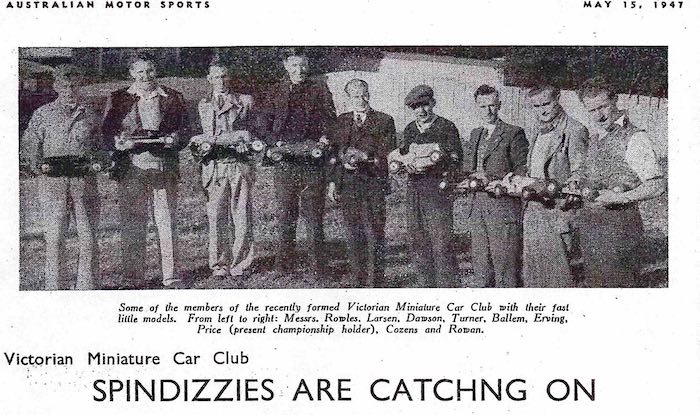 (Ed: There was a vacant block next to the clubhouse at the time so the photo above is likely to have been taken there)

“In this, the beginning of a series of articles, I would like to familiarize readers with the facts of the club these enthusiasts have formed, the membership of which is rapidly increasing. Regular meetings are held at the model dock yard at 216 Swanston Street, Melbourne at 8pm on the third Friday, each month, and an open invitation to attend these meetings is extended to all interested in this fascinating hobby. At present, the club is holding Weekly Race meetings at a hall in Fairfield, and the competition is very keen amongst the car builders”.

And then June, 1947: “ The Victorian Miniature Car Club’s main event for the past month was a handicap event run over an eighth of a  mile at the club’s track at Fairfield, and was well attended by members and spectators. These meetings being held regularly on Saturday afternoons in the Fairfield Canoe Club Hall of the Esplanade, Fairfield.”

This next item is an extract from “Circle-Torque Tethered Car Racing in Australia,1940 -2010.” by Lynn Peacock.: “a portable track was built by Charlie Ballem, who also raced rail cars, and 2cc to 3.5 cc capacity cars were raced in the clubhouse of the Fairfield Canoe Club, Esplanade, Fairfield. The cars were attached to a cable swivelled to a pylon bolted to the floor. This track was 36 feet in diameter, and there was a safety ban on cars doing more than 45 miles per hour (vide infra). The current for the ignition was carried by insulated wires attached to the cable and connected to the car. A whistle was blown to signal the start of the run time. There was a roller driven by an electric motor to assist the driver in starting his car. Each car was given three laps to warm up, and then was timed. Six laps equalled 1/8 of a mile”. 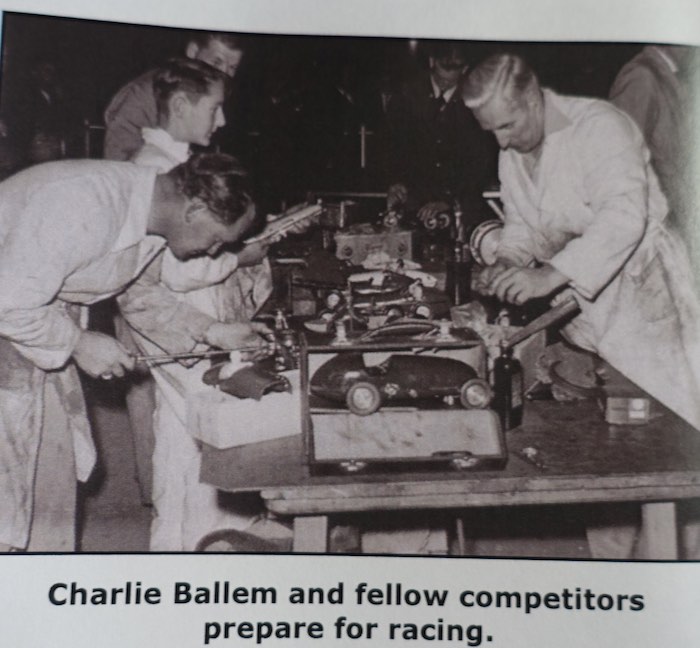 Finally, another wonderful article which calls into question the wisdom of the club committee to rent our clubhouse to the Victorian Miniature Car Club in the first place. Read on….

This excerpt is taken from an autobiography of Trevor Pound (a noted Preston motor cycle racer of the era). The chapter is headed “The Invader and the Studley Park Boathouse”. It tells of his first motor sport experience, in his teenage years, when he was introduced to miniature car racing. He was studying at Preston Technical School at the time and it was there he and some friends duly built their first primitive model. Later, in response to a letter to the USA “Model Engineer” magazine, where his friend had lamented the slowness of their model, a US tethered car champion sent them a package containing his own race-winning “Invader” car. “This car had technology we had never seen before in Australia having been clocked in the USA at over 100mph”.This is where the fun starts…….

“By this time, the Victorian Model Racing Car Club had moved from the tennis court and had rented a very large unused boathouse by the side of the Yarra River that they could use while a new outdoor track was being built at Maribyrnong (Ed. This was at the rear of the Anglers Rest Hotel). The boathouse floor was flat, and large enough in diameter to run the tethered cars, and it also had the advantage of being undercover and having workbenches at one end (see photo above). All that was fine until we three kids arrived with our “Invader”.

The boathouse was a typical Yarra boathouse built on stilts to keep it clear of rising floodwaters. After everyone was duly awed by the appearance and the new technology of our “Invader”, we did our inverted pushbike start of the McCoy engine and launched the “Invader” with a scream that drowned every other noise in the vicinity. All was well for a few laps until the “Invader” built up speed and the gear ratio wound up as the rear tires expanded, and then the car started to exceed any speed previously seen in the boathouse. As the speed builds up to what was a terrifying level, we were all crouched around the walls of the boathouse wondering what to do, when the boathouse started to rock on it stilts under the unbalanced centrifugal action of the 5kg model car approaching goodness knows what speed. The rocking of the boathouse got worse and worse and none of us kids were game enough to get sufficiently close to the track edge to get at the cut-off switch of our car. Eventually, one of the adults braved it enough to reach across with a broom handle and hit the cut off wire on the “Invader” before the boathouse collapsed.

It was duly suggested that we didn't come back with the “Invader” until the new outdoor track was finished. But we did have the satisfaction of having the fastest tethered model cars in the country, and we didn't quite wreck the boathouse”.

Question 1: “What were our leaders thinking when they permitted the tether-pole to be bolted to the centre of the hall floor in 1947?”

Question 2: Perhaps it was an “Invader” that caused the demise of our first clubhouse and not the much-maligned “floods of 1934”?