History Snippet – “1957, the race from Wonga Park to Princes Bridge - a recollection by Jonathon Mayne.” 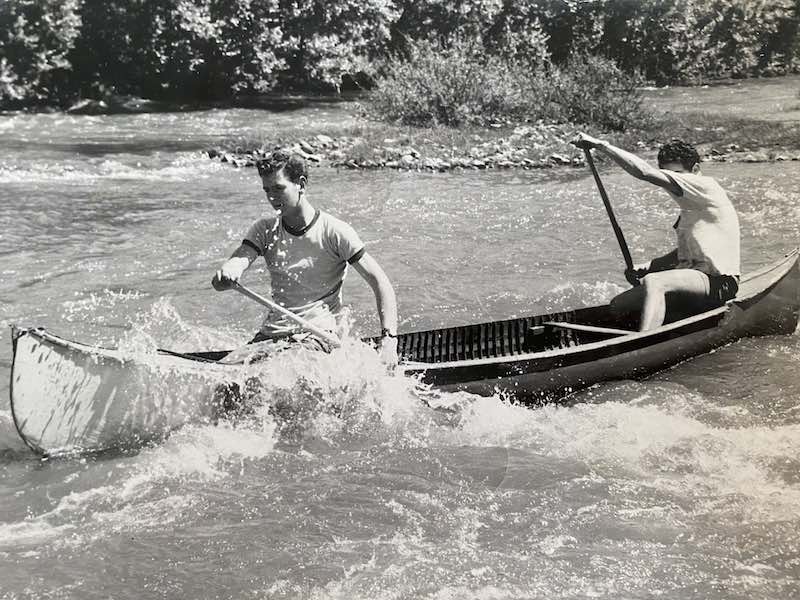 The Canoe Assoc. Award Card states that this event was held on the 20/10/1957. It’s a long time ago and I recall that race as one of the most significant events I ever paddled. Jim Simpson and I were magic together, particularly in the rapids.

Jim  and I paddled from Wonga Park to Princes Bridge. I forget how long it took but we came second by 1 second. How did that happen you might ask?

We had come down through all the rapids, passed the club (FCC) and portaged around Dight’s Falls. The photo is a newspaper shot of us coming through the rough water below the falls just above Johnston Street bridge, Jim in the bow and me astern. Looking at the photo I see there is a piece missing from the gunwale. I don’t remember how that happened but I suspect Jim repaired it and probably spliced a piece into the gap to fix it. Jim being a craftsman of some note.

Ralph Brown was supporting us and from the footbridge upstream of Hawthorn Bridge. Brownie yelled out; “The bar at the Hawthorn Rowing Club is open”.

It was a hot day and we were so far in front we thought,’ we’re good’, so we ran the boat up onto the Hawthorn landing, dived into their bar and downed a beer. Simmo said, “I could use another”.

It must have got their adrenaline up as they closed the gap on us but we wouldn’t give up.

We held our lead almost to the finish. In the run to the line at Princes Bridge they were on the city side and we were skirting along the edge, just off the boat shed landing.

With just metres to go a large ferry passed between us and the wake picked us up and dumped us high and dry on the landing, a length short of the finish while Peter and Max claimed the honours.

You know that there is no “if” but if we hadn’t stayed for that second beer I think we could have won that race.

Epilogue.
I recently had the pleasure of interviewing Jonathon’s paddling partner, the aforementioned and much maligned, Jim Simpson. He was of the strong opinion that he was far too competitive a paddler to have even considered taking one beer during a race, let alone the fabled “second at Hawthorn Rowing Club”! Where’er the truth might lie; it would seem true that Jim and Jonathon did come second in this heroic race from Wonga Park to Princes Bridge. However, to brighten their day, it would now appear that they are well in line for an “On-top-of-the- Yarra-award”, given where they finished the race?

A tall story if ever we heard one.

As an aside, the Hawthorn Rowing Club was also swept downstream, not by the wash of a ferry nor by floods, but by the Fire Brigade and Emergency Services. Their clubhouse, and its fabled bar, at Hawthorn Bridge did not have any road access, so in spite of a recently installed boat landing, they were denied access and moved downstream to their current home at the Bridge Road boathouse area. We have not heard what the bar facilities are like in this new premise.